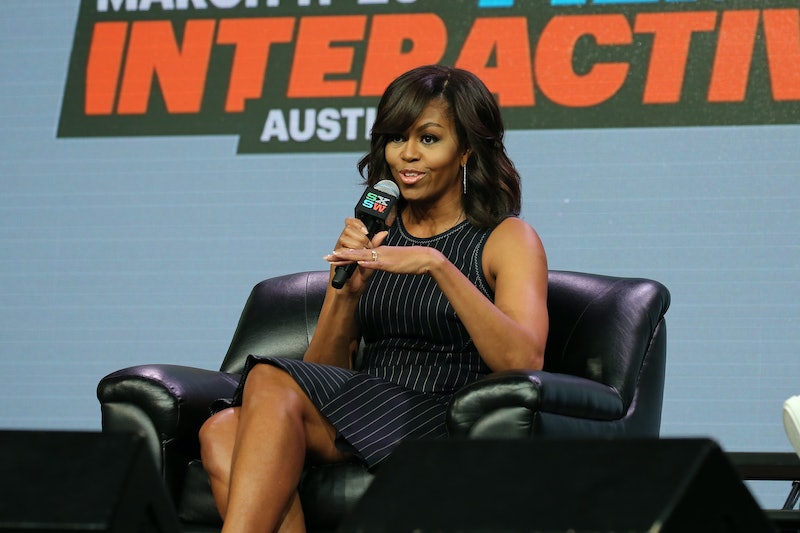 Although all the panelists on stage Wednesday at the SXSW Music Festival in Austin, Texas, were women (accomplished and esteemed ones at that) and all talking about the importance of empowering girls across the globe, the First Lady made it very clear that women couldn't — and shouldn't — be doing it alone. Speaking about her new Let Girls Learn initiative, Michelle Obama urged men to join the fight for women in all areas of life. In doing so, she made a larger statement about the importance of having men as members of the feminist movement.

After delivering the keynote address, Obama participated in a panel that was moderated by actress/singer Queen Latifah and also included rapper Missy Elliot, songwriter Diane Warren, and actress/activist Sophia Bush. It focused on music, female empowerment, and girls’ education — specifically, the fact that 62 million girls worldwide who should be in school are not. As part of the #62MillionGirls movement to provide them with educational opportunities, Obama wrote in Lenny that we must tackle issues that aren't "just about access to resources like scholarships, transportation, and school bathrooms. It's also very much about attitudes and beliefs." So her answer seemed especially fitting when a male audience member asked what steps men could take to support the women in their lives:

While Obama was applauded for her response, the concept of male feminists has been heavily popularized and politicized in recent years. The debate as to whether or not one can be a feminist man — and to what degree — has been divisive and not always pretty. In 2014 for New York's The Cut, Kat Stoeffel wrote a column titled "So You Want To Be A Male Feminist? Maybe Don't," saying, "There’s something suspicious about anyone eager to identify with the oppressed. Many men seem to reach for the 'feminist' label first to shore up their sensitive-dude bona fides and, second, to get a little female validation." While she didn't say outright that men can't be feminist, Stoeffel spoke to a not uncommon unease some feminist women have had with counting men in the feminist ranks. A 2013 article in XOJane by Megan Murphy also threw some major shade at the concept of male feminists.

However, it seems to be shifting pretty decisively to a "yes." Look at the almighty Emma Waston, actress, U.N. Goodwill Ambassador, and all-around goddess, and her HeForShe campaign. It specifically works to bring men into the circle. And plenty of ink has also been spilled arguing men can, and need to be, feminists. This evolution speaks to the fact the word “feminist” itself is going through something of a rebranding, as more and more people catch on to the fact that the word will not bite them. Thankfully, the idea that men should be threatened by the prospect of women gaining the rights and privileges they themselves have been afforded begins to seems increasingly silly, though, of course, nowhere near obsolete.

The First Lady spoke earlier in the panel of “grown men [who] are trying to snuff out the aspirations of little girls.” It’s a hard balance, trying to include people who may hold near and dear the values and opinions you’re fighting against. But reminding us that even though some men are oppressing women, the women fighting for equality benefit immeasurably from the support of those who already "have a seat at the table" simply by virtue of being men. And when someone as influential and beloved as Obama does it, well, that only makes it more powerful.

At the end of the panel, Obama circled the discussion back to the various ways a country benefits from an educated female populace and the work that Let Girls Learn is doing.

"For me, 62 million girls that are not getting an education, that's personal," Obama said. Hopefully, the men in the audience felt the same.

More like this
5 Ways To Stand In Solidarity With Women In America From The UK
By Sophie McEvoy
How To Fight For Reproductive Rights, Based On How Much Time You Have
By Courtney Young
Here’s How Lizzo Is Supporting Abortion Rights After The Roe v. Wade Reversal
By Brad Witter
Why You're Seeing Green Bandanas At Abortion Rights Protests
By Lexi Inks
Get Even More From Bustle — Sign Up For The Newsletter