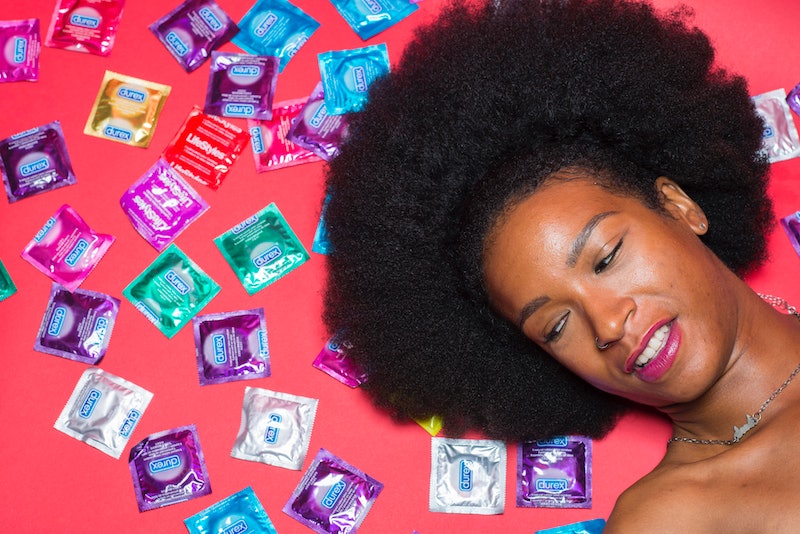 One of the most interesting things about condoms is that, despite the great impact they can have on our reproductive futures, they are generally absurdly low-impact on our bodies. They're disposable, one-use, and cheap, but they also manage to keep sperm out of our systems, block STD exchange — and do it without having any effect on our menstrual cycles, egg production, or our partners' sperm levels. But does the introduction of something "foreign" into the body during sexual intercourse have any hidden consequences? Does condom use change our bodies at all? Does it change our bodies forever?

I can assuage your fears: if condoms are used correctly, they may make temporary changes to our bodies — but nothing that will last or have long-term impact. The biggest temporary alteration any condom makes to a body is, of course, blocking sperm; depending on the type of condom being used, it can also offer protection against sexually transmitted diseases. (Note, however, that only latex and polyurethane condoms offer this benefit: lambskin or "natural material" condoms don't.)

Here are five things that may happen to your body if you choose to switch to condoms as a contraceptive method. None of these should be taken as a good reason to have sex without protection; find other ways to protect yourself if condoms don't appeal.

1. You May Experience Irritation If You Have A Latex Allergy

The point of condoms is their user-friendliness, but one particular side-effect might pop up if you turn out to have an aversion to latex: a skin allergy. The range of symptoms can be pretty vast, from rashes, burning sensations, and itchiness to scaling skin and racing heart rate, depending on the particular type of allergy you have.

Latex allergies are, luckily, not the end of contraception; you can take another birth control method like the Pill, but if you're also in a position where you need to protect yourself against potential STDs, there are non-latex condoms available. Beware, though, that non-latex options are more breakable than latex ones; the World Health Organization compared latex options with condoms made of polyurethane film or synthetic elastomers, and found that they were more likely to break and be exchanged for other birth control methods.

This is a weird one. The philosophy behind this idea is that exposure to sperm without the interference of a condom can actually hinder the development of anti-sperm antibodies in some women, which are powerful little things that "act by blocking sperm movement, capacitation, fertilization and inhibition of embryo implantation," according to one 2011 study of their role in infertility. It's an immune reaction that's not really understood very well, though it seems to have some relation to having sex during your period.

It's theorized that if you use condoms, the female body is less likely to produce these antibodies, because it's not exposed to sperm that might set them off. (Anti-sperm antibodies seem to be a malfunction of the immune system; most women won't produce them, but it may be that some kind of bodily breakdown that allows contact between blood and sperm produces antibodies by accident.)

It's not a wholly accepted theory, though. "Condom therapy" in the treatment of infertility was widely disparaged in the '80s, and fertility doctors now don't think condoms have much of a role in mediating the levels of anti-sperm antibodies in women. One fertility service says that the idea of using condoms to stave off antibody growth and help aid future conception has "proven to be of no value in increasing the chances of pregnancy in antibody-positive couples."

3. You Won't Impact Your Fertility In Any Way

The presence of latex or non-latex materials in your vagina during sexual intercourse won't actually harm your chances of having babies later on. Condoms are one of the "barrier methods" of contraception, which act as physical blocks between sperm and the female reproductive system. Part of their point is that they're highly temporary, and that your innate fertility can be immediately restored by stopping their usage. They won't do anything to your menstrual cycle, or leave anything nasty behind in your reproductive system to cause problems later.

The only possible way that a condom could impact your reproductive health negatively (if you're using it correctly and it doesn't break) is if it slips off and "gets lost" inside you. This is pretty rare and they can usually be retrieved without medical help, but don't let it float around in your innards if you can't reach it; it might cause infections that would actually cause a bit of potential havoc for later baby-making, so go to your OBGYN and let them go fishing.

4. You May Be Less Happy

If you're on another method of birth control and with a partner who has no STD risks, you may choose to eschew condoms once you've heard this one. It turns out that there may be a link between direct exposure to semen (i.e. without condom use) in women and more happiness. The link was discovered in a 2002 study of 293 women that found that higher condom usage seemed to be correlated with lower mood. When they scored the women on a depression index, people who used no condoms and had regular sex were the happiest, while those who always used them were the saddest sexually active group.

Before you throw away the condoms altogether, though, it seems that this might be due to a variety of factors. Psychology Today explains that higher use of condoms might indicate other lifestyle indicators that may have caused women to feel unhappier, like a lack of stable sexual relationships or the presence of an STD. (The researchers said they'd controlled for these factors, though of course, none of this accounts for the many happy women who don't like to sleep with men at all.) But there are also compounds in sperm exposure, from female hormone levels to ovulation stimulators and trace elements of things like serotonin and endorphins, that could indeed contribute to happier moods in women. It's an interesting cocktail, so keep it in mind if your mood seems to plummet in a condom-using relationship.

5. You May Not Produce Enough Natural Lubrication

This is an interesting one: some women seem to believe that condoms actually cause vaginas to produce less lubrication, but it's not the case. Instead, sex with a condom can feel drier because the surface is fundamentally different to that of a penis, and causes more friction and possible "dry" feelings for both sex organs. It's not sucking moisture out of anything though, I promise. It hasn't altered your sexual functioning; it's actually just altered your needs for a smooth ride. Lubrication is a good idea with condoms anyway, but do not use oil-based ones, as they'll degrade the latex of the condom and raise the risk of breakage.

A new study just revealed in the Journal Of Sex Research reveals another belief about condoms that's incorrect: that even with correct use, women can get UTIs from using them. UTIs (urinary tract infections). This ain't actually thing. As Women's Health points out in their examination of the research, which studied 25 women and why they don't use condoms frequently, UTIs are caused in sex through the transferral of bacteria or friction against the urethra. Condoms may increase the friction if you don't have enough lube, but otherwise they're not to blame for UTIs, or yeast infections, if it comes to that. Don't get it twisted; just grab the water-based lube.

More like this
GIRLI & Q Fell In Love At A Skatepark & Never Looked Back
By Jessica Morgan
TikTok’s Viral “Rating Game” Is Exposing Everyone’s Icks
By Courtney Young
13 Ideas To Add To Your Sex Bucket List
By Kristin Magaldi
What Are Swingers? Everything You Need To Know
By Lexi Inks
Get Even More From Bustle — Sign Up For The Newsletter