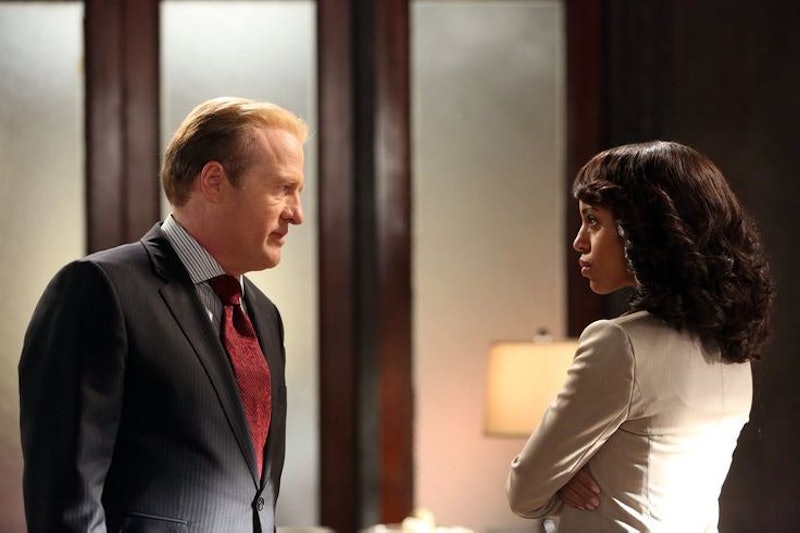 Over the years, Scandal has thrown a lot of characters our way, so if you were a little confused when you saw a familiar face crop up on Thursday's episode, I totally can't blame you. But if you didn't, you're probably wondering, who is Hollis Doyle? There are so many villains in Shonda Rhimes' version of Washington D.C. that it's hard to keep them all straight, but Hollis is definitely one of the slimiest. After a long absence from the White House, he's back... and he wants to get involved in Mellie's campaign for all the wrong reasons.

But before we get into that, let's back it up a little bit. At his core, Hollis is eerily similar to Donald Trump in his most cartoon bad guy moments, and I don't say that lightly. We first met him in Season 2, when it was revealed that he was involved in the vote rigging scandal in Defiance that led to Fitz's presidency. He hired the people who rigged the machines... and that's just one of the reasons he's a truly bad dude. He also had those people killed in an explosion to hide what he'd done, so he might be the only character in the show who's actually scarier than Papa Pope.

Another huge moment for Hollis was when he hired Pope & Associates to help find his daughter, Maybelle, after she staged her own kidnapping, and once she was found, she decided to leave her family for money Hollis offered to her. So yeah, being that evil doesn't exactly pay off... except he's still rich, and now, he wants to use that money to influence Mellie's campaign. In exchange for a donation, though, there are strings attached— ones that mean that Mellie will have to make her decision with his input, especially when it comes to kicking immigrants out of America.

And it gets worse: Not only does he take a meeting with her, but he meets with Susan Ross, too. Poor, sweet, innocent cinnamon roll Susan Ross, who hasn't been around to see how evil he can truly be.

Unfortunately, it results in something pretty scary: Hollis decides to run for president — after stealing Mellie's tagline and platform Mellie and Susan now have the worst opponent ever. But if anyone can take him down, it's Mellie Grant, and I can't wait to watch.