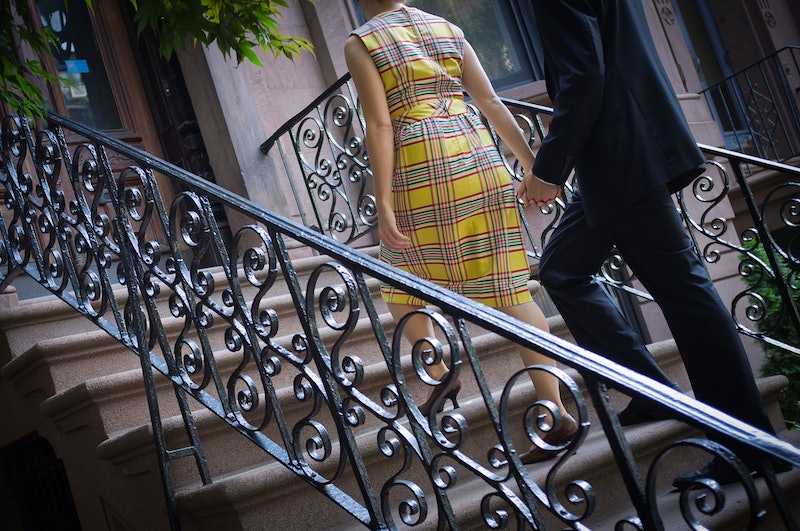 You've probably heard before from some magazine's advice column that you shouldn't live with your boyfriend if you ever want him to pop the question (it even happened to this lady in her late 60s). I've mostly dismissed this notion as old-fashioned, reminiscent of The Rules. But a new RAND study by sociologists Michael Pollard and Kathleen Mullan Harris shows that unmarried men and women do have different expectations when living together, with men reporting lower levels of commitment.

Research shows most of us will first move in with a partner at about 25 years old. A 2011 study published in the Journal of Family Issues suggests some variation between male and female motivations; women gave "love" as a reason for moving in together three times as often as men, while men volunteered "sex" as an explanation four times more often than their female counterparts. Despite these discrepancies, both genders agreed on spending more time together, sharing financial burdens, and test-driving long-term commitment as the main reasons for the big consolidation of stuff.

Apparently, this test-driving aspect is even stronger for men. 41 percent of live-in boyfriends report that they are not "completely committed" to their girlfriends, while only 26 percent of live-in girlfriends say they aren't "completely committed." These results are totally different for married couples who, predictably, have much higher levels of commitment — yet wives still report slightly higher levels of commitment than their hubbies.

So how can we make sure we're on the same page? It all boils down to clear communication. Previous research by psychologists Scott Stanley and Galena Rhoades differentiates between "sliders" and "deciders". "Slider" couples fall into each step of their relationship, often getting married because that seems to be the next logical step. "Deciders," on the other hand, communicate their relationship goals and choose each next step according to their needs.

People who live together prior to engagement ("sliders") are 40 percent more likely to get a divorce than people who live together after engagement or marriage ("deciders"). But this doesn't mean you can't live with your boyfriend — you just need to be weary of "sliding" into cohabitation rather than making a shared decision based on the values central to your relationship. So pack up your boxes and hire a moving truck, but make sure you know where you're going.