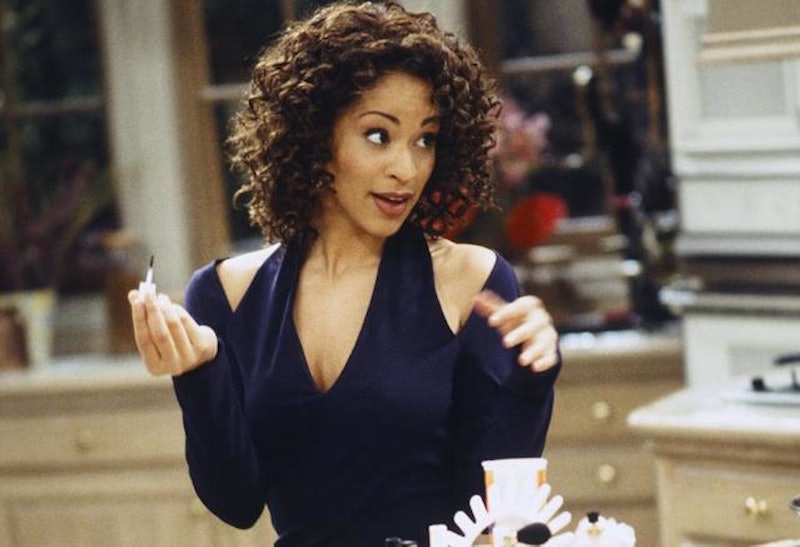 Hilary Banks may have been one of the most underrated characters on The Fresh Prince of Bel-Air. In fact, I was always surprised that her portrayer, Karyn Parsons, didn't skyrocket after this show's success, but I guess there was only room for one mega-star from Bel-Air in the Hollywood fame machine. Nonetheless, it would have made for fairly interesting television if the writers had attempted a Fresh Prince spin-off starring Hilary Banks, but since we're just not that lucky, I suppose I'll have to settle for imagining what it would have been like if Hilary Banks was the star of The Fresh Prince of Bel-Air . I for one would have tuned in to watch the Hilary show every week like clockwork.

If you weren't a huge fan of the beloved sitcom, or need a little character refresher, Hilary Banks can be summed up in one word: vain. Don't get me wrong. She was super lovable at the same time, but that love-ability often came at the expense of someone else. For the most part, that someone else was Jazz, but that's a whole other story. Hilary Banks was the focus of any room she was in, and, if Fresh Prince had been her show, I'm sure there wouldn't even need to be other cast members. In fact, I think the whole project would look a little something like this...

1. The Title Of The Show Would Change, Obviously

It obviously couldn't be The Fresh Prince of Bel-Air. Because, for one, she wasn't a prince, and, for another thing, slang wasn't really Hilary's thing. I imagine her going more with a title like Hilary. Simple and all about her.

2. The Theme Song Would Be Totally Different

I can't even picture what it would be like to see Hilary Banks rapping on a basketball court. While it would be entertaining, I imagine her theme song would be a little slower and sassier, and maybe have her walking around a mall while other cast members help her with her things.

Or at least maybe the love of her life wouldn't have died in a tragic bungee jumping accident.

4. There Would Be A Lot More Mirrors

Let's be honest. Looking at herself in the mirror was a skill Hilary was so good at, she could slap it on her resume.

5. The Family Wouldn't Be As Rich

If there was one thing Hilary knew how to do, it was spend exorbitant amounts of money on unnecessary items. Fancy clothes, jewelry, cars, you name it. If it was her show, I'm sure a lot of storylines would revolve around her spending too much money on something. Or everything.

6. Jazz Would Have Had A Much Bigger Role

Since his sole purpose on this show sometimes seemed to be about bugging Hilary, I'm sure they would have found more air time for him to do just that.

7. We Wouldn't Have Men In Black

Sorry, I had to. This show led to a lot of big career opportunities and movies for Will Smith, but it would have been a shame if the world never got to see Men In Black.

8. The Show Might Be A Drama Instead Of A Comedy

Hilary was very prone to dramatics, so I'm sure there would have been a fair amount of drama in the show. Instead of her fiance plummeting to his death via bungee jumping, I'm sure he would have accidentally murdered someone or something worthy of a Shondaland show.

Hilary and her hats would have been the biggest #fashiongoals back in the '90s, I'm sure of it.

This would have been the most amazing thing to happen on television. Talk about a total character transformation from enemies to lovers. I mean, that's what good television is made of, right?

11. Karyn Parsons Would Be A Household Name

Sadly, this would have become a reality if she had only gotten her own show. Actually, you never really know in life how things are going to turn out, but I like to think a lead in a popular show would have set her career on a path to greatness.

Even though these all would have made for great television, I loved The Fresh Prince of Bel-Air just the way it was. No improvements needed, even of the Hilary variety.