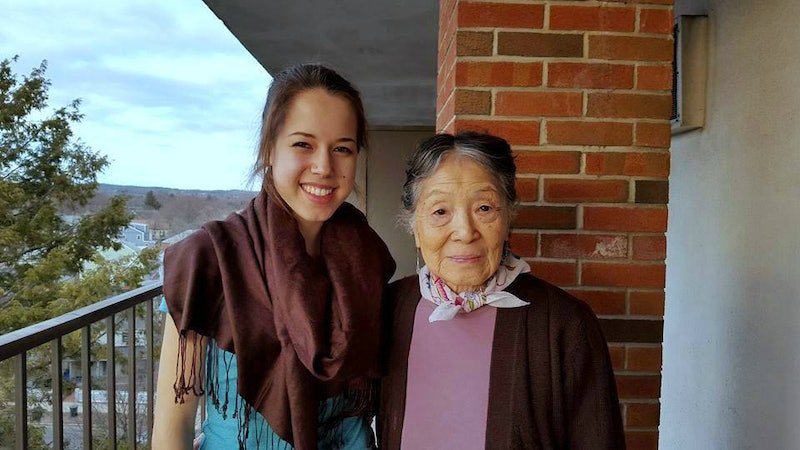 I am certainly not the only American who shudders when she hears Donald Trump spew anti-immigrant rhetoric, but the hate-filled remarks cut me deeper than some others because of my family's history with xenophobia in the United States. The rise of Trump worries me in a personal way because of my experiences as a Yonsei — a member of the fourth generation of the Japanese diaspora. From first to fifth generation, Japanese immigrants are classified as Issei, Nisei, Sansei, Yonsei, then Gosei. My dad is Sansei, his mother Nisei, and both of her parents Issei. My Japanese heritage isn't always obvious, but that doesn't make me feel any more comfortable with Trump's anti-immigrant plans.

When friends and acquaintances tilt their heads, squint their eyes, and tentatively ask me about my ethnic makeup, I usually give them a simplified and standardized response: three-quarters white, one-quarter Japanese. I only specify nationality because I know it’s why they’re asking. I could go into detail about the mish-mash of European countries that contribute to 75 percent of my ancestry, but I know from fielding a wide range of ethnic guesses or being told “I knew you were Asian” that the slice of racial ambiguity in my otherwise-standard white girl appearance inspires the question.

As a modern, multiracial Yonsei who easily passes as white, my experiences with racial tension seldom exceed discomfort. While I’ve received fetishizing “compliments” about Asian women and nervously witnessed kids pulling at the corners of their eyes to make racist jokes, I have never suffered personally-directed racial aggression. If I look two generations back, however, I know that my grandmother, Akiko Yamagawa Hibbett, cannot say the same. Her experience as a Nisei after Pearl Harbor parallels the discriminatory treatment that Muslim Americans and immigrants suffer in the present day.

My grandma Aki was 17 when the Japanese Internment began, and like many Japanese Americans, she lived in the Los Angeles area. She refers to the Japanese peoples’ forced relocation as “evacuation” — the label officially employed by the U.S. government — and calls the internment camp just “camp” or “concentration camp.”

“It was March,” she tells me, recalling when her family was forced to leave their home. “I don’t know why I remember that, but I’m sure.”

My grandma says that although she knows that official notices publicized the forced relocation of Japanese Americans in 1942, she doesn’t precisely recall how her family was notified by the U.S. government. Instead, her memories focus on daily life leading up to evacuation.

“I was vice president of the Nisei club [at school],” she explains, recalling, "They got all the Japanese children together after the announcement of Pearl Harbor and the [subsequent] rounding up of certain Japanese people … The advisor to our club told me to get up there and tell the class that if there were any people who were in trouble — if their mother or father got taken away — they would get help for us."

My grandma remembers that she passed out slips of paper on which children who needed help could write down their information, “but nobody sent in slips," she says, adding, "I’m surprised, because I know a lot of Issei got taken away."

Not all Japanese families were forced to go to the camps — those with the means and opportunities to do so had the option of moving inland, away from the Pacific coast. Luckily for my grandmother, her family, the Yamagawas, were one of those able to escape, thanks to an uncle living in Littleton, Colorado.

“I wrote to the governor of Colorado and asked him if it was alright to go to his state, and he wrote back a nice letter saying that Colorado was one of the United States of America, and [as citizens] we were welcome to go there." Even with the family’s pass to Colorado cleared, my grandma still had to convince her parents. At the time, Japanese Americans were not aware of the cramped and squalid conditions that awaited them in the camps. Moving to Colorado remained up for debate.

The Japanese part of my family comes from Okinawa, a prefecture of Japan made up of several small islands. Compared to mainland Japanese people, Okinawans tend to be shorter, live longer, and appear more Polynesian than East Asian. Historically, mainland Japanese citizens have looked down on Okinawans and treated them as a regionally-defined second class, causing Okinawans to feel little Japanese nationalism. So while the Japanese Internment as a whole was an unwarranted, xenophobic, racist endeavor, the internment of Okinawans in particular proved especially illogical and culturally ignorant.

“I hoped my parents had made up their minds every time I came home from school," my grandma tells me. She notes that her own biases and internalized anti-Japanese sentiments fueled her desire not to be relocated to the camps, saying, "I didn’t want to be cooped up with a bunch of 'Japs.'"

She adds with a laugh, “I don’t know what I thought I was.”

I was surprised to hear her use the hateful term with relative ease, but I realized that at the time, she and everyone with whom she shared a nationality were casually regarded as such. The word "Jap," the internment, and daily life as Nisei were inseparable concepts.

Eventually, my grandma tells me, she got her wish of avoiding a camp thanks to her uncle. “My uncle was older than my father. He was my father’s elder, so we had to do what he said. His wife said to go to Colorado.” Despite the Japanese family's traditionally patriarchal structure, she had a strong pull over her husband, and so the family went.

In Colorado, the family started farming, much to my grandmother’s dismay. “I was hoping my mother and father would go into the hotel business, because they had experience … I guess they decided it was safer to be out in the country, farming,” she says. “Ever since we got [to Colorado], I wanted to go to New York,” she adds. Her older sister, Kiyo, lived in New York City at the time, working in civil service. Kiyo was previously employed in Washington, D.C., but although her job in no way involved the war, the U.S. government decided to transfer Japanese Americans away from the capital. “Kiyo wanted to be a grade school teacher, but they just weren’t hiring Japanese at the time."

My grandma was so unhappy in Colorado that in September 1942, roughly six months after evacuation, she moved to New York City to be with her sister. My grandma asked her brothers, Joe and Ken, to come with her, but they felt a strong sense of oyakoko (filial piety) and declined. Joe and Ken were “more concerned for my family, and my father and mother, because they didn’t speak very good English," my grandma explains. "I was only thinking about myself."

Even today, grandma feels guilty about the decision she made as a teenager, and scoffs at how little foresight she put into it. “I’m still appalled at how dumb I was. I thought, ‘I’ll go to New York. I’ll get a job somewhere.’ That was difficult, to say the least.” As my grandma criticized her past choices, I thought she was being too hard on herself. Her decisions sounded reasonable and relatable to me, if slightly under-planned.

Once she arrived in New York City, my grandma struggled to find a job, and the anti-Japanese sentiment certainly didn't help her. She recalls seeing "a posting for a telephone operator, and I called and applied and they said no. I have a feeling it was my accent.” Eventually, she managed to find a job. “[My employer] was Japanese, actually Okinawan,” she explains. “He had a business where he made big feather flowers on a wire … You wired the feathers by tying them on this pole. I thought they were the most ugly things.”

My grandmother got out of the flower-threading business and worked her way through college. She later married my grandfather and moved to the Boston area, where they raised my dad and still live today. When she talks about her youth, she chastises herself for her lack of oyakoko and considers her decision to pursue work and education in New York foolish.

It is such a contrast to my own experiences and the life I have been able to have as a modern Yonsei. I am free to attend a private college, pursue a potentially useless degree in English and Latin American Studies, and go wherever I please after graduation. Aside from some shame over my staggering privilege, I feel little guilt about my choices. I don’t have to, because I grew up being taught that as a mostly white middle-class U.S. citizen, I have the right to make them.

My Sansei father called the internment “the last instance of really overt [governmental] oppression of Asian Americans.” Yet for many ethnic groups, circumstances like evacuation and interment remain a threatening possibility. While no modern policy comes close to the extremes of the Japanese Internment, the rhetoric with which current politicians discuss the Syrian refugee crisis echoes the xenophobic mindset applied to Japanese people in the 1940s. Trump referred to Syrian immigrants as potential “Trojan horses,” and his popularity throughout the country only seems to grow. Even more frightening is the fact that he is not the only politician expressing deeply ignorant fears about immigrants, often grouping them together with terrorists.

The governor of my home state of Massachusetts, Charlie Baker, declared he wouldn't accept Syrian refugees after the Paris attacks in November, saying simply “I would say no as of right now." His resistance toward accepting refugees reflects the persistent problem of classifying all Muslims, regardless of their country of origin or beliefs, as threats. Like the ignorant grouping of all Japanese Americans, this not only demonizes an entire population, but also disregards the abundant cultural diversity within it.

I grew up learning about my Japanese family history the fun way: by playing with koi fish kites on Children's Day and learning how to roll cone-shaped temaki sushi. My grandma made miso ramen for lunch when I was little, and I thought that only Japanese American kids like me got to enjoy such a delicacy. But when I got to high school, U.S. history courses glossed over the Japanese Internment, and then the harder learning began. And it continues as I watch Trump's rise today.