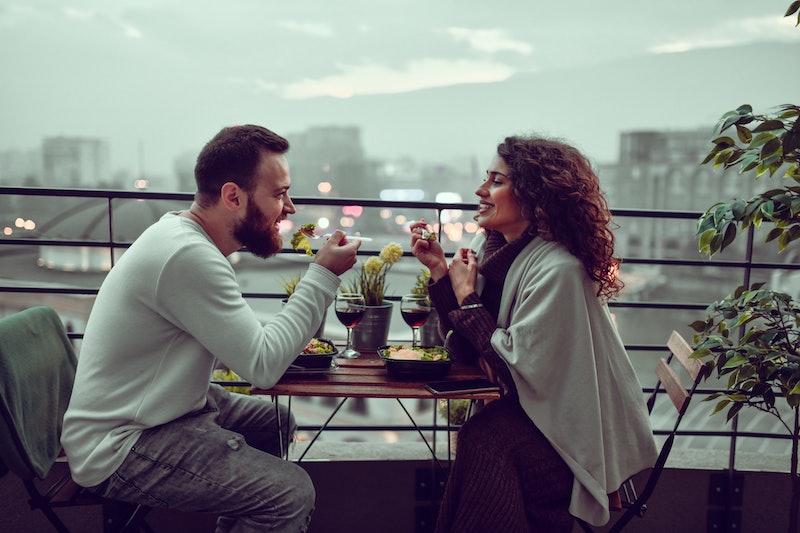 Love is a battlefield, as the '80s jam so artfully points out. And if love is indeed a battlefield, dating is the front line. Dating is hard enough, just by virtue of involving meeting new people and wondering if they like you, but if you or your date do one of the things that are not OK on a first date, then the battle gets even ore fierce.

All war metaphors aside, anytime you put yourself out there and wonder if a stranger will pick up what you're putting down, you're taking a risk. Much of the time, it's the most wonderful type of risk. Then sometimes, there's the dates from hell, that make you swear off relationships for life and put some doubt in your heart about the future of the human race.

Like all things, knowledge is power. And when I was a Domestic Violence Victim Advocate and Planned Parenthood Certified Responsible Sexuality Educator, I saw people tolerate some pretty unacceptable behaviors. This list of things that are not OK on a first date can serve to both teach you how not to act, and teach you how to not let others treat you. Not that you need taught. But we could all use some reminders every now and then. And even if you go through the worst date in history, don't let it hold you back from putting yourself out there. You're totally awesome single, of course. But you're also totally worthy of the right kind of love, if you want it.

1. Accepting Anything But Enthusiastic Consent

Given that the first point in the article illustrated how common it is for women to be victims of sexual assault (all people can be victims, FYI, but it's an issue that disproportionately affects women) should give you a clue as to what we often worry about. If it's your first date, maybe don't have it in a creepy basement. Maybe don't corner or isolate your date until you get to know each other. Maybe don't pick them up in a vehicle full of weapons. And maybe don't drive them to a remote place that they can't easily identify. You might not give these actions a second thought, but I guarantee your date will spend at least a second wondering if they're about to get serial killed. And potential impending murder is totally not the kind of good time that makes people want to go on second dates.

One of my besties is super liberal and her husband is super conservative. It happens. And it works because they share and interest in and respect for each other's beliefs, even if they don't agree. If you end up on a date with someone who is your polar opposite, don't just assume they're birthed from the loins of the devil himself. Even if you're not interested in being with someone who doesn't share your values, you can be respectful. Ask questions rather than criticize. Have polite debate that doesn't resort to name calling or throwing drinks in each other's faces. Basically, be a decent person. Give them the benefit of the doubt that they're also capable of basic humanity. We're reaching an age where our beliefs are incredibly divisive. Use this date as an opportunity to practice kindness and compassion, even if you'd rather put something sharp in your eye than to have as second date. If you can't do that, just leave.

Be prepared to pay for something on your date, even if you never have to, and even if your date offered to take you out. Even if it's just a few extra dollars for the tip, or after-dinner coffee, and even if your date ends up paying for everything anyway, it's still good to offer to pay for something. You may disagree with me on this, and equality doesn't have to mean the death of chivalry and romance, but it also doesn't mean that we reinforce certain stereotypes about who pays. You can both pay. Or at least, offer to pay. And if the issue makes you worry, just arrange who will pay for what beforehand, or make it clear that you each pay for yourselves. And remember, paying for a date does not entitle you to sex. Ever.

Call me paranoid, but I tend to think that you should not give someone you don't know a lot of personal information about yourself right up front. Odds are, they're not going to use that information to kill you or steal your identity, but they could. If you're a person without anxiety disorder, this is good advice anyway, because oversharing is not something most people are into, at least not right away, according to Sheiresa Ngo in an article for Cheat Sheet. That includes emotional tirades about your exes. Let these topics come up naturally and give just the basics at first. Save your true vulnerability for someone you're sure deserves it.

If it's your first date, you probably shouldn't be declaring your undying love before dessert. It takes more than one date to know someone. I mean, to really know them. Your date will probably either think there's something wrong with you, or that you're ready to settle for anything that seems like it wouldn't suck too much. Neither are emotionally healthy reactions to just meeting someone. Even if you have strong feelings right away, it's best to see how things unfold in the coming days and weeks before you start pinning wedding dresses on Pinterest.

Jealousy can be normal, usually when it's occasional and fleeting. When it's constant, and when it comes with controlling behaviors or flaring tempers, that's a red flag. If you're on a date with someone you don't know very well, and you're already seeing signs of jealousy, run away as fast as you can. This is such a big red flag that you're heading toward an unhealthy or abusive relationship. I can't emphasize it enough. The same goes for if your date begins exhibiting controlling behaviors, like asking you where you've been or why you wore what you were wearing. Run.

Dating is kind of terrifying, but also kind of wonderful. If you're new to things, or have an unsuccessful track record, maybe just work on being yourself and trying to make your date comfortable. Those two things alone matter so very much.