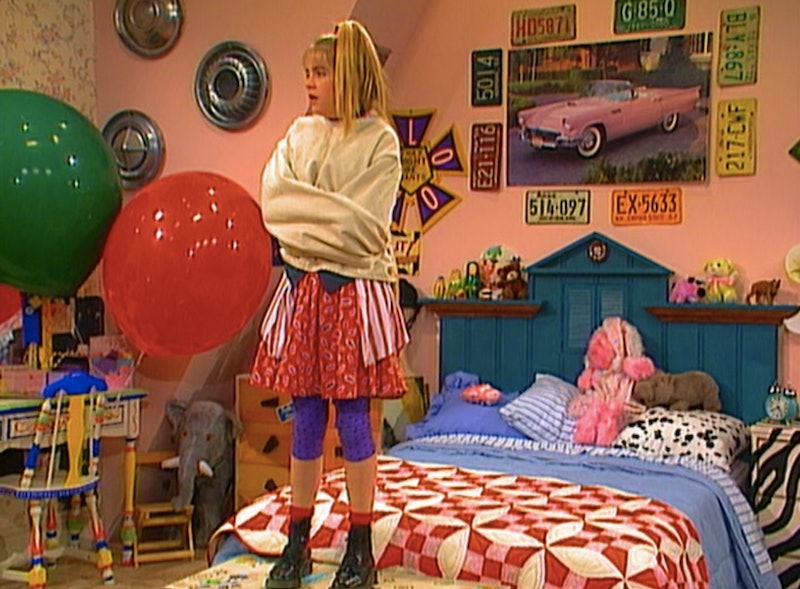 At the precocious age of 7-years-old, I'd count down the days on my calendar each week, desperately waiting for Saturday morning to roll round again, when my sisters and I would barricade ourselves into our living room. We were shamelessly, head over heels in love with one TV show: Clarissa Explains It All. Clarissa Explains It All was definitive 90s viewing. Clarissa was warm, funny, wore whatever the hell she wanted to, and had mad tech skillz. What was there not to love? But what really sticks — beyond the great fashion and the even greater comedy — was how empowering it was in a way that was never lecturing or earnest.

Rewatching the show now, I'm struck by how entertaining it still is and how unbelievably cool Clarissa still comes off as. At age 27, I've got to admit: I'm still aspiring to be as independent, strong, and as ballsy a feminist as Clarissa Darling. So here's my proposal. Let's all rewatch the entire five seasons, and make it obligatory viewing in high schools across the world to empower a new generation of fierce ladies with an addiction to stonewashed denim. Then let's kick back with some mojitos and watch the patriarchy crumble. Here's why Clarissa was the small screen's original feminist badass.

Remember that pilot episode? Clarissa starts the show by breaking the fifth wall, talking straight into the camera to the audience just like in Woody Allen's famous asides in Annie Hall. She emerges from the bottom of the screen, her mouth coated in toothpaste and growls at the camera. Giving zero f*cks about her toothpaste-coated face, she launches into her monologue: she's winning, she's confident, she's charismatic. She's basically Holden Caufield in the first few pages of The Catcher In The Rye minus the neuroticism. In this first scene, the show establishes what Clarissa could be: that she could be as little obsessed with her looks as a male character and that she could be funny and weird. Compared with everything else that was on TV at the time, this felt revolutionary.

2. Clarissa Was The First Nickolodeon Show To Feature A Female Lead

And these weren't just the gushing emotions of a seven year old. The reason why it felt revolutionary was because it was revolutionary. Clarissa kickstarted a network-wide trend: without Clarissa Explains It All, there'd be no The Secret World of Alex Mack and The Mystery Files of Shelby Woo. Trendsetter.

3. Clarissa Wasn't An Everygirl, She Was Completely Herself

But the best part was that, although Clarissa Explains It All was Nickolodeon's first attempt at a female-led show, they didn't try to make her cookie-cutter representative of all womankind. Clarissa was enjoyably weird. Forget your lame pet hamster: Clarissa had her own pet alligator, Elvis. Sure, he was only in the show for a few episodes, but who could forget a pet like that? Instead of trying to be relatable, Clarissa had quirks that made us all want to be her.

Did Clarissa read Judith Butler, or did Judith Butler watch Clarissa Explains It All? Discuss. Whichever way round, it's hard to truly believe that Clarissa approached life in terms of a gender binary. Long before the Facebook movie came out, Clarissa thought tech was cool enough to design her own computer games in her spare time. She was never too ladylike not to discuss barfing and other bodily functions, and, although she was teenage and had the potential to be self-conscious around boys, she still seemed Ice Age levels of chilled out around her undeniably cute best friend, Sam, who insisted on coming to hang out in the most teen Romeo way possible — via a ladder.

5. She Was All About Stomping Out Male Oppression

Did I say male oppression? I meant Ferg-oppression. The patriarchy was embodied in the tiny body of one wizened ginger boy: Clarissa's brown-nosing younger brother, Ferguson. Sticking it to The Man meant sticking it to Ferg: with Ferg's slyness, superficial charm, ability to appear to toe the line and to manipulate every situation to his advantage, he was clearly that dude in your office who keeps getting promoted over you. As such, I'd argue Clarissa's various attempts to kill her younger brother were obviously an elaborate metaphor for the eventual equality of women with men via the feminist superpowers of wearing a series of really great scrunchies and stone-washed waistcoats.

So let's all raise a glass this Wednesday night to the indomitable, incomparable Clarissa Darling. May our outfits be as crazy. May our interests be as wide-ranging. May we all eventually own the miniature pet alligator of our dreams.