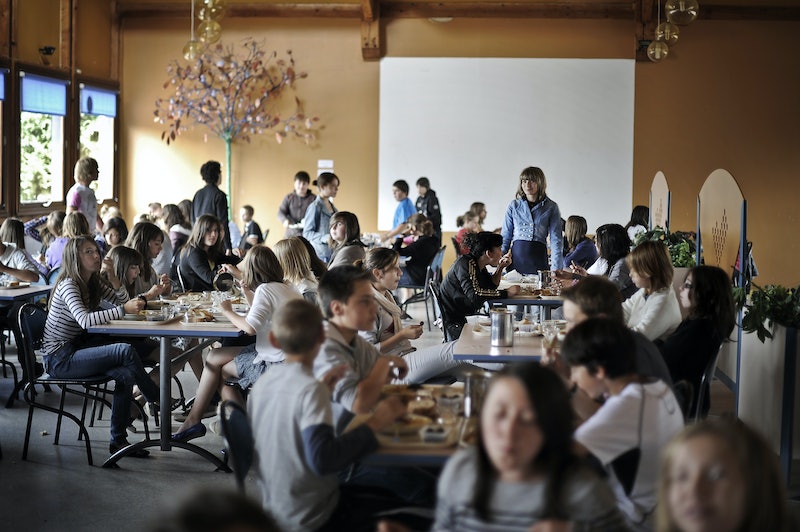 If you're perfectly happy having a very small circle of friends, it might be a sign that you're smart. A new study says that more intelligent people are better off with fewer friends. Yeah, this would have been a great thing to know in middle school.

This information comes from a study published in the British Journal of Psychology. Researchers explain that, in many ways, humans are still innately suited to lead the sort of hunter-gatherer lifestyle our early ancestors enjoyed, and that things that would have made them happy still make us happy, too — it's a theory known as the "savanna theory of happiness." In keeping with this, they found that people's overall happiness and satisfaction tends to decline in very densely populated areas, but that it tends to increase the more social interactions they have. In other words, we're more or less wired to be happy living a life where we interact extensively with a select group of people who are the only ones around.

But it turns out that highly intelligent people don't follow this rule.

"The effect of population density on life satisfaction was ... more than twice as large for low-IQ individuals than for high-IQ individuals," the researchers explain, adding that "more intelligent individuals were actually less satisfied with life if they socialized with their friends more frequently."

In other words, talking to your friends all the time actually makes smart people unhappy.

So what is up with all this? Well, there are a few theories. It's possible that highly intelligent people are more likely to be focused on some other, non-social pursuit from which they derive more satisfaction than hanging out with friends. Which I suppose is possible, even though this implies smart people are also on the whole less lazy, which has not been my experience at all.

Another explanation, however, goes back to that "savanna theory of happiness" we brought up earlier. If human brains really are best suited to living in a nomadic group of around 150 people, then modern life...isn't really ideal, from the perspective of recreating the conditions most conducive for happiness. But researchers suggest it's possible that highly intelligent individuals are better able to adapt to modern life, and that they therefore are less bound to humanity's evolutionary predispositions. Which means less need for social interaction.

Whatever the explanation might prove to be, this obviously doesn't mean smart people don't like having friends. But it does probably mean that they don't enjoy having too many — after all, keeping track of lots of people does usually involve, you know, talking to them. So if you're naturally more of a loner, congratulations! It might be a sign of intelligence.