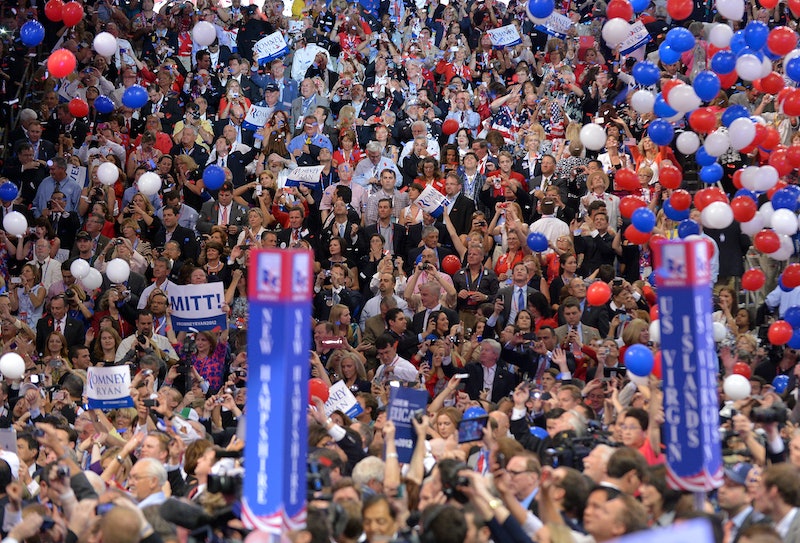 Are you ready for all-out political chaos? That's what many people in the Republican party are hoping for right now, quite frankly: a brokered convention, perhaps the last, best chance to keep billionaire businessman Donald Trump from seizing the GOP nomination. But if that were to happen ― if Trump were to roll into the Republican convention in Cleveland short of the delegate total he needs to claim the nomination outright ― who else could be in the mix? More specifically, can a new candidate join a brokered convention?

Luckily, this is a simple answer, although it speaks to what could end up being a very fraught, confusing situation. Here's the idea: when the Republican convention meets to choose the party's nominee, the pledged delegates will cast their votes in accordance with the outcomes of the state primaries and caucuses, and as it stands now it looks strongly like Trump will have the most in his corner.

However, there's a threshold he has to meet to win the nomination on the first ballot: 1,237. As it stands now, he's sitting at just 673 delegates, slightly more than half of what he needs. And if he falls short on the first ballot, things get really interesting ― then, the delegates are unbound, and can vote for whoever they please, whether their choice actually ran for president or not.

That's maybe the single biggest source of intrigue relating to a brokered convention this July. The assumption is that Trump would be unable to pick up the delegates he'd need if all of them were freed to make their own decisions ― in other words, he badly needs to sew things up on the first ballot. In the event that he doesn't, then anyone in the GOP could be entered for the nomination.

But who would it be? One name that's gotten a lot of play is Paul Ryan, who was the bottom-half of the Romney/Ryan ticket in 2012. To be sure, him getting the nominated in a contested convention would be controversial and anger-inducing for much of the Republican base ― Trump's rise is often framed as a rebuke against the conservative establishment broadly, and the Republican congress explicitly, and nobody would evoke those elements of the party more than a failed former vice presidential candidate and current Speaker of the House. Also, Ryan has insisted he wouldn't accept it.

There's also been some scuttlebutt about last cycle's nominee, Mitt Romney. That, needless to say, would pose all the same problems, since nobody who wanted Trump to be the nominee is going to settle for the man he's been taunting as a loser and a choke artist from one side of the country to the other.

But that's the conundrum for the Republican elite ― there may not be any scenario in which Trump doesn't get the nomination that won't be met with overwhelming sound and fury at this point. However it would happen, it'd be received as the party establishment descending on one candidate to try to destroy him, and that poses a big threat to the GOP's prospects come November.

As would the prospect of a Trump third party candidacy, which you'd better believe he'd consider if he felt cheated or slighted come convention time. The only thing to do, I suppose, is wait and see. It'll still be a few months more ― the Republican National Convention is scheduled for July 18th through the 21st.