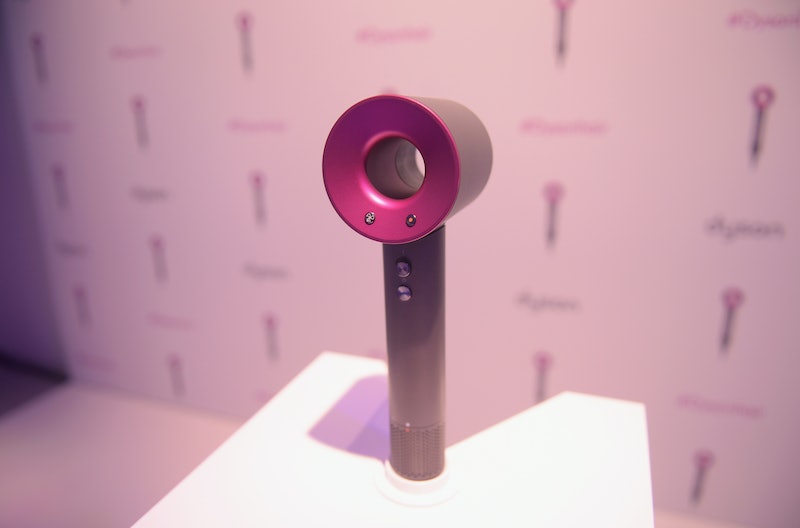 Ever since I impulsively chopped off all my hair last spring, I have been (not so) patiently waiting for my hair to grow back. For nearly a year, I swore off scissors, becoming more fearful of my hairdresser than my dentist. Recently, though, I took one look at the frizzy mess of split ends that had become my hair and decided it was time to bite the bullet and take a visit to the salon.

I sat in humiliation as my hairdresser remarked how damaged my hair was. When she asked what kind of blow dryer I was using I just shrugged and said, "I don't know. I think I got it at CVS.

"Well,” she said. “There’s your issue. You need a better blow dryer."

What I didn't tell my hairdresser is that, not only did I cheap out on a drugstore blow-dryer, it is five years old and has a two-inch hole burnt in the diffuser. I splurged on my hair-straightener, but I’ve always sort of assumed that blow dryers were one of those beauty items you could save on. So, I headed to Sephora to see if expensive blow dryers are actually worth the dent in my bank account.

The sales associate at Sephora pointed me to the Drybar Buttercup Blow Dryer. For those who don't know, Drybar is a blow dry bar in Manhattan that does blowouts (and only blowouts) for $40. The first time I heard about it, it sounded to me like something out of a Saturday Night Live skit, but the more I learned, the more it made sense. You pay at least $60 for a blowout at a traditional salon, so why not pay a fraction of that? I've never actually been to a Drybar, but I have friends who rave about it, so I figured I could trust their product. And then I saw the price. The Buttercup Blow Dryer rings in at $195, which is a bit more than I'm willing to spend on a blow dryer.

I asked the sales associate if she honestly and truly believed that the Buttercup was worth the steep price point, and, if so, why. She explained to me that the Buttercup contains conditioning nano beads that seals your hair's cuticles, leaving hair noticeably more silky than, say, my broken $20 blow dryer. "A better dryer equals better hair," she said. I asked if she was lying, but she insisted that she wasn't and it seemed to be mildly offended that I accused her of lying about blow dryers.

Despite the Buttercup's impressive claims, adorable (albeit slightly too adorable) name, and pretty, yellow hue, I left Sephora, resisting the temptation to make an impulse purchase. When I got home, I spoke to my three roommates and we agreed that it made sense to split the Buttercup, both fiscally and because we would all be using it anyway.

I've been using the Buttercup for about a month now and, I admit it: I'm in love. Deep, passionate, blow dryer love. It has left my hair much smoother and frizz free, and cut my dry time in half, which is maybe the best thing about it, as I am a lady who loves her sleep. The three temperatures and two speed settings mean that it works for me and my three roommates, despite all of us having incredibly different hair textures. I have medium-length, curly, hair, prone to frizzing, but it works just as well for me as it does on my roommate's long, straight, color-treated hair.

One of the neatest features is the self-locking cool shot button, which means you can get a quick shot of cool hair without pressing the button down. It might all be in my head, but I am completely convinced that this button is the difference between a good hair day and a day where I'm rocking the top bun by 3 p.m.

If you’re not willing to splurge on the Buttercup or don’t have roommates you can split it with, you can still find cheaper blow dryers that will be better for your hair than a $20 one. Look for a blow dryer that uses ceramic heating. Some blow dryers use metal or plastic elements that cook (as in literally boil) the water out of your hair. This is both terrifying and horrible for your hair. Another good thing to look for are ionic blow dryers, which produce negatively charged ions to trap in moisture and give your hair more body, without the dreaded frizz element. Bonus points, ionic blow-dryers usually dry hair faster, allowing you to hit the snooze button just one more time.

Now, if you’ll excuse me, I’m taking Buttercup out for dinner and a movie, and I'm already running late.