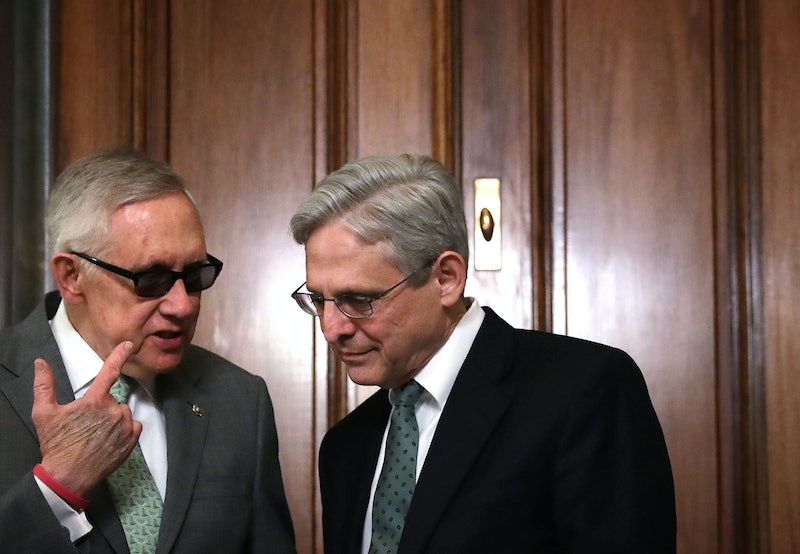 One of the big questions on everyone's mind is whether or not Merrick Garland will be confirmed before the Supreme Court rules on Whole Woman's Health v. Hellerstedt, otherwise known as the most recent attempt by the Texas legislature to restrict access to abortion. The case was added to the docket in September of last year, and it was one of the cases which Justice Antonin Scalia was heavily involved in before he passed away in February. The first round of arguments were held on March 2. While it is hard to pin down when exactly a decision will be released, it is possible that the court could issue a ruling on the case as early as tomorrow.

According to an announcement on the well-regarded court-watching blog scotusblog.com, the site says in an editor's note to watch for an opinion "in one or more argued cases" at 10 a.m. ET on Tuesday, March 22. Whether or not the court will be issuing an opinion about Whole Woman's Health v. Hellerstedt isn't known yet, but it would mark a relatively quick turnaround time from when arguments were heard to when decisions were made. Tuesday will mark only the second time that the court has issued opinions since the passing of the late Justice Scalia; perhaps without the famously loquacious lines of questioning from the late justice, things on the court are moving at a more lively pace.

To date, more than 80 amicus curiae briefs have been filed, according to the official online archive maintained by the Supreme Court. Amicus curiae is a Latin phrase meaning "friend of the court," and any lawyer qualified to argue cases at the Supreme Court level can file them, as long as they are relevant and on-topic. Looking at the extensive list, as well as the filing dates, it is possible that the court has had enough time to process the information, and argumentation, contained inside. On the other hand, controversial decisions regarding reproductive rights are often left to the end of the term, like in June 2014 when the court ruled in McCullen v. Coakley that Massachusetts was in the wrong when they legislated a 35-foot buffer zone around abortion providers and legal protest staging points.

The gist of the Whole Woman's Health case comes down to whether or not the Texas Department of State Health Services is going out of their way to make abortions difficult to access. In this case, two Whole Woman's Health clinics in Texas had to cease offering abortion services to patients because of new regulations introduced by Texas authorities.

These regulations in question are twofold: first, clinics must now have admitting privileges at local hospitals so patients would be able to quickly be taken to a nearby, qualified hospital for emergency care. The other suite of regulations have to do with making sure that clinics themselves are outfitted to offer hospital level care onsite. In other words, mandating that any clinic offering abortion services comply with ambulatory surgical center standards. If these regulations seem redundant, it's because they pretty much are. They also ended up forcing 75 percent of the remaining providers in Texas to shut their doors or be in violation of the law, according to the Center for Reproductive Rights.

Much like in McCullen, it could be said that the essential questions in the Whole Woman's Health case have just as much to do with the use of space, and the geographies of where women are allowed safe, uncomplicated, and affordable access to abortion, than over any specific regulations that restrict the freedom of an American woman to exercise her legal right to an abortion, should she chose. Regardless of what Merrick Garland's feelings are on reproductive rights, it seems unlikely that he will be confirmed in time to weigh in on this case; some select Senate Republicans have said that a lame duck appointment of Garland may be possible, meaning that by then, the case will probably have been decided months earlier.