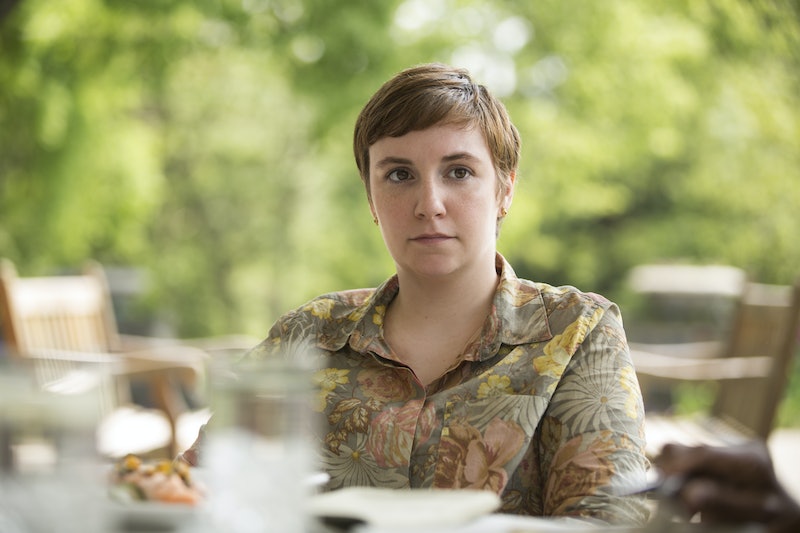 Since the moment Girls first introduced us to Hannah Horvath four seasons ago, she's always been very much a creature of habit. She hangs out with the same friends, she writes, and until she met Fran and realized just how unhealthy her relationship with Adam was, she was all about him and him only — not exactly qualities of a risk taker. In fact, not since she went to Iowa for grad school has Hannah taken a major risk, and even then, she dipped out as soon as it got difficult. But now, that's all about to change. On Sunday's episode of Girls , Hannah hooks up with a girl for the first time, and it's the biggest leap she's taken in a long time.

So how exactly did this happen? It all started when Hannah and her mom went on a women's retreat, appropriately named Spring Queening, aimed mostly at women who are going through a divorce. As Hannah's mom used the time to try to figure out whether she wanted to get a divorce and look for new love or not, Hannah couldn't have hated her vacation from real life more. She wanted to be allowed to use her phone, and she did not want to hike. Can you blame her? I cannot. It seemed totally miserable.

And that's where Holly comes in — one of the retreat's organizers and a yoga instructor in every sense of the world. She's bluntly honest just like Hannah, and immediately, they forge a connection, and it's easy to see why.

At first, it seems like Hannah's only found an ally in this place, but it quickly becomes obvious that their connection means so much more than that. Immediately, Hannah's getting involved, throwing herself into the retreat's activities, and before she knows it, she and Holly are hooking up — something we've never seen Hannah do on the show before. In fact, as far as Girls has shown us, she's always been into guys only, something Hannah clarifies when she admits she's experimented in her college days but it never went any further.

So what's the verdict? She's not into it. It's not long before Hannah's pulling away (despite Holly's protests) and has totally decided that this girl thing is not for her. It totally upsets her, and later, Hannah sums up the whole experience like this: "I was following my inner queen and she makes terrible decisions."

I'm used to disagreeing with Hannah while I watch Girls, and this is one of those times. Even though it didn't turn into some kind of magical moment, I don't think her decision to try something new with Holly was a terrible one. She did exactly what the retreat wanted her to do — get out of her comfort zone, something she doesn't normally do unless she's dragged out of it by one of her friends. Will this signal a new era for Hannah? I wouldn't bet on it, but it could give her the opportunity to find a new perspective on basically everything.

It's definitely not easy to do something that's different from what you've always done, and now, we know that Hannah is capable of it. I'm hoping to see more risk taking from her in the future... like maybe moving out to Japan to run that cat cafe with Shosh? What, it looks like fun!