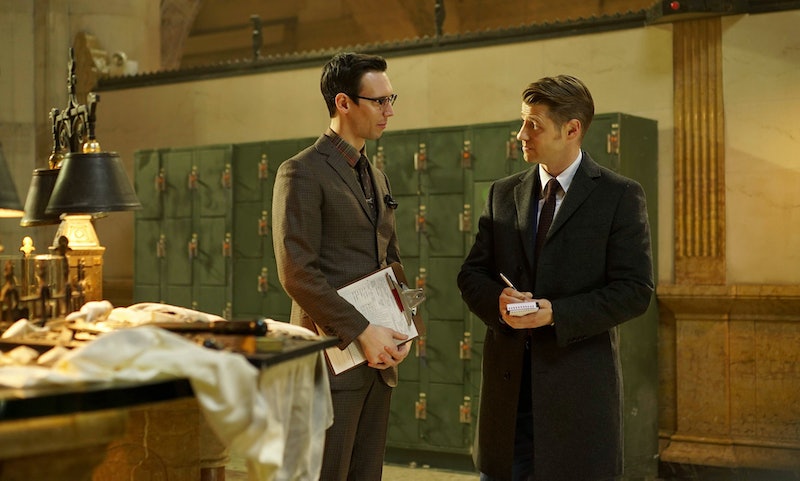 In a truly shocking development on Gotham, the Riddler sent Jim Gordon to prison after revealing his involvement with the death of Theo Galavan. Ed Nygma fully embraced his evil side, concocting an elaborate plan in order to frame Jim for the murder of a supposed witness who saw him killing Theo Galavan. It's pretty impressive that for his first outing as the Riddler, Ed already managed to find his signature symbol, the green question mark, and successfully execute both of his plans, getting Jim to walk straight into a trap that led Captain Barnes to find him standing over the dead witness, fingerprints on the murder weapon.

And when Jim realized he was totally screwed, he seemed to accept his fate with some dignity. He said a heartfelt goodbye to Harvey, who promises to get him out of Blackgate, and even asked Dr. Thompkins to take the baby and get far away from Gotham City. This is a bit of an unconventional Riddler, as he's just as much of a vigilante as he is a villain at this point. Jim Gordon did kill Galavan, and lied about it, sending Penguin to prison in his place. Of course, he's really only doing this in order to stop the investigation into his murder of Kristen Kringle and her ex, Tom, so... I guess he's still pretty villainous.

But seeing Jim Gordon in handcuffs shipped off to Blackgate Prison wasn't the only big surprise in the episode. The last glimpse of Barbara was her lying in a hospital bed in Arkham. But almost as if she knew that Jim was suddenly single, she woke dramatically from her coma, prompting the nurse to call Dr. Hugo Strange, who's been experimenting on his patients. He might try to give her supernatural powers, or, perhaps, torture her into sanity, the way he did with Penguin. Either way, with Jim in prison, Lee should be wary — definitely lock the doors at night, because I predict Barbara might try to pay her a visit.