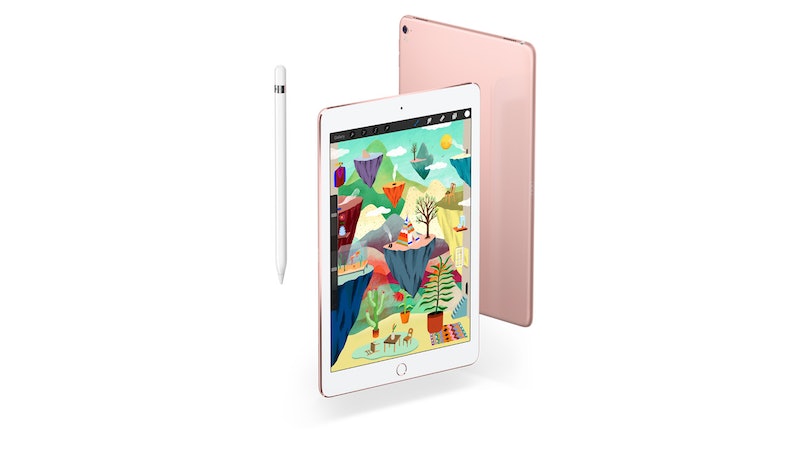 Much like its move with the new, smaller iPhone, Apple has released an updated iPad with a smaller screen size but bumped-up features. The original sized 9.7-inch iPad hadn't been updated since the current version; the iPad Air 2 was released in October of 2014. Then the first iPad Pro was released in November of last year, surpassing the original in features and speed — in addition to screen size. All in all, it was time for an update, but it comes with a new price. The smaller iPad Pro will cost $599.

That's more than the starting iPad Mini, certainly, but it comes with more features. For starters, the starting size for storage space is 32 GB, compared with just 16 for the old model. Some of the most noteworthy improvements are the support for Apple's Pencil stylus and the Smart Keyboard. They allow easier and more exact input than tapping your thumbs on the touchscreen.

The processor was also bumped up, so the new smaller version should perform just as quickly as the larger iPad Pro. The camera is modeled not after the Pro but the iPhone 6S, which takes incredible photos. This may be the device's one downside: its 12 megapixels may force an uptick in tourists snapping away with their tablets.

The upgrade brings the original-sized iPad back to the forefront of digital technology. Customers will now get to choose among the different iPad models based on size and features — not just features alone or size alone. If you want the Pencil, you don't have to go with the bulk of the larger Pro model. On the other side of the product lineup the iPad mini has long been thought to be stealing customers from its bigger sibling too. Especially since the September upgrade brought its features in line with the original-sized model. After the updates announced Monday, that will no longer be the case.