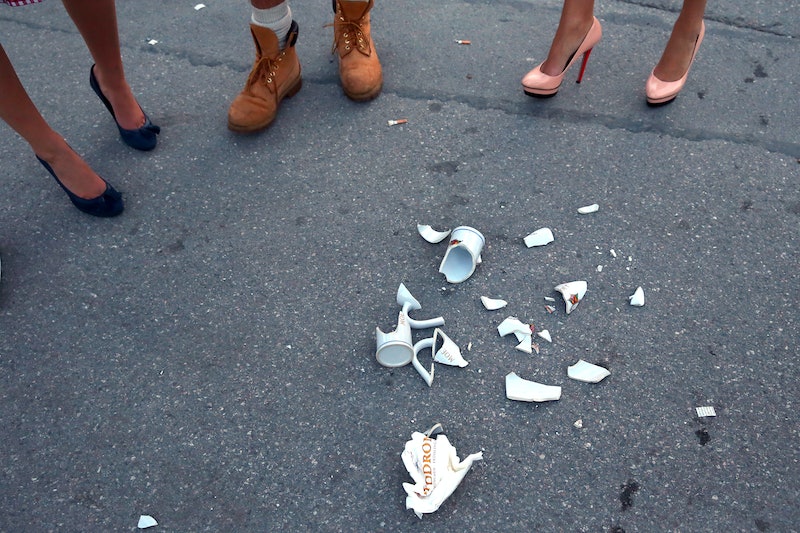 I've been smashing plates at family events since I was a little girl, but now you too may smash dishes for fun. In Greek culture, while smashing dishes has fallen out of favor as a "fun" activity, families still break plates (generally special bought plaster ones) at weddings and other momentous events in order to bring luck and ward off evil spirits. But you can do it for fun, without ever having to think about those ancient cultural aspects that inform a whole nationality of people's celebratory experience. Who ever said cultural appropriation couldn't be a total romp? If this sounds appealing to you, you can head to Melbourne, Australia (the city with the largest Greek speaking population outside of Greece), check yourself into the Break Room, and bypass all the boring families duties that normally goes with smashing plates, and smash them for no reason at all!

The redeeming feature of the Break Room is it's not just a place where you yell "opa!" and smash some plates. You can break a whole lot of other stuff too. And while it annoys me that plate-smashing is being used as a "fad" or marketing ploy, I still find myself with a burning desire to pick up a baseball bat and take it to an old Discman. I don't know if they have old Disman's at the Break Room, but they do have "old technology" that you can plow into, and twelve year old me has a bone to pick with the Discman.

Ed Hunter, who founded the Break Room, told Mashable, “Whether it was using a piece of technology wasn't going my way or just feeling overwhelmed I'd have what I feel is a fairly natural compulsion to throw my phone at a wall, just something to release the pressure. We're here if you'd like to have a good time smashing things in a safe environment."

The Break Room's site says, "Everybody wants to blow off steam in their own way. That's only natural. Some people go for a drive, others hit the gym... At The Break Room we hit things. With bats. It's a little more liberating than the gym. So come to The Break Room, pick up a bat, put on a Break Suit and feel good. You know you want to."

Meanwhile, considering I bought it up, here's some footage of Greeks breaking plates and dancing at a wedding:

I feel like smashing plates the Greek way looks more fun anyway. But like I said, I wouldn't throw smashing some old technology with a baseball bat out of bed. Discmans have done me wrong. (I've got no beef with the Walkman).