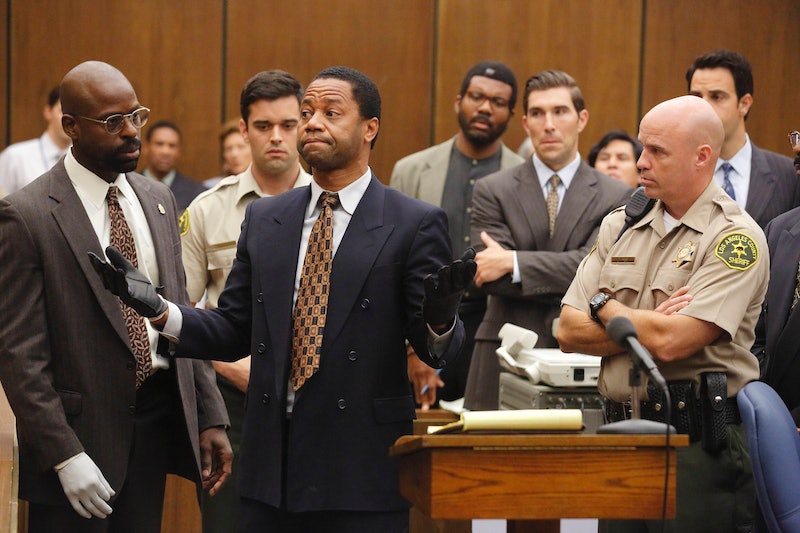 One of the strengths of The People v. O.J. Simpson: American Crime Story is its focus. With only 10 episodes, it makes sense to hone in on one aspect of the trial. The series chose the lawyers, and there's plenty of personality and drama to fill up those 10 episodes — and more — right there. Yet while it's smart to just follow the lawyers, it means that there are some stories we won't hear in The People v. O.J. Simpson. For example, we hardly know anything about the jury so far, who also had their own ordeals to go through. In fact, you might be surprised to learn how long was the jury sequestered for the O.J. Simpson trial after spending the past seven episodes of American Crime Story with them on the periphery.

The jury was sequestered for 265 days, or eight and a half months, according to USA Today. At the time, the New York Times reported that the jury was "sequestered longer than any jury in California history." And according to CNN, it became the longest jury sequester ever on Aug. 24, 1995 — two months before the trial came to an end. Usually, when you get a jury summons, you get pretty mad that you have to waste a day in court seeing if you'll be selected. Imagine how angry you'd be if that stretched on for most of a year.

"It's like being in the same foxhole together," former juror Francine Florio-Bunten said in an interview quoted by the Chicago Tribune. "You're all in the same predicament. One day you need a shoulder to cry on. The next day they cry on yours." It could be like a foxhole, or it could be more like a college dorm. The same article notes that tensions arose in sequestration, with "squabbling over which videos to watch, how telephone usage was apportioned, who shared the exercise equipment and where to go on outings."

Those jurors really had to put their lives on hold for all that time. According to CNN, most of the jury was happy to get back to their lives once the trial was over, but especially one in particular: Gina Rhodes Rosborough, a 29-year-old postal worker. When the trial was over, she "called her family and said she wouldn't be home for a couple of days," the network reported in 1995. "She had absconded with her husband, whom she married in September 1994 — the month she began jury duty." Sorry, newlyweds, apparently the Trial of the Century took precedence over your new married lives.

Although it wasn't all bad. There were some unintended perks of being a juror during the Simpson trial. "They got a tour in a Goodyear blimp, a private audience with the comedian Jay Leno, a trip to Universal studios," the New York Times reported in 1995. I'm sure they all would have traded that in for eight months with their loved ones, but, if you have to be sequestered, it may as well be on the Goodyear blimp, right?

Then again, the bad probably outweighed the good. When asked what he'd do if he was ever called to be on a sequestered jury again, David Aldana, former Simpson juror, told On the Record host Greta Van Susteren, "I would do anything in my power to get out of it."