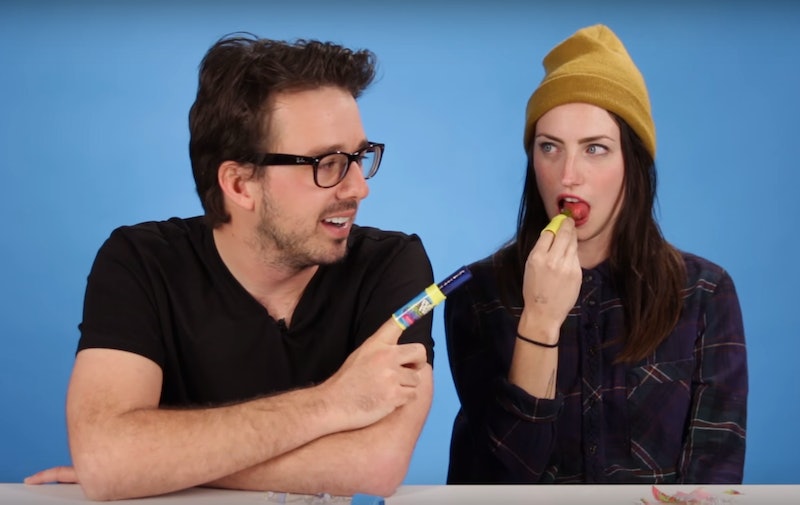 “My favorite flavor was red.” So speaks a participant in a new BuzzFeed video called “High People Try '90s Snacks.” The premise is exactly what is sounds like: A bunch of people get high AF and test out everyone’s favorite snacks of the 90s, from Gushers to Surge to Push Pops. Their slightly hazy conclusions? In the 90s, flavors were colors, food was for play, and everything sort of tasted like plastic.

Before the taste test begins, the video’s participants wax nostalgic about their favorite snacks from back in the day, including Fruit Roll Ups and “the cheese and cracker version of Dunk-a-roos.” Everyone appears to have loved Gushers, so they’re all psyched when Gushers appear on the table. But memory seems to have made Gushers better than they actually were; in the harsh light of (marijuana-infused) adulthood, the participants find that eating the chewy candy is a lot like eating plastic. They move on to Surge (or what one woman calls “Teenage Mutant Ninja Turtle blood”), and Fun Dip. Another woman gets philosophical while dipping her candy stick into the sugar-powder, musing, “I love when a candy can figure out a way to make eating it an event…. You have to pretty much stop everything else to consume this candy.” Fun Dip is a metaphor for life, y’all.

So will you be searching for Surge and Dunk-a-roos the next time you get the munchies? Watch the whole video below to see what happens when pot and 90s nostalgia collide: