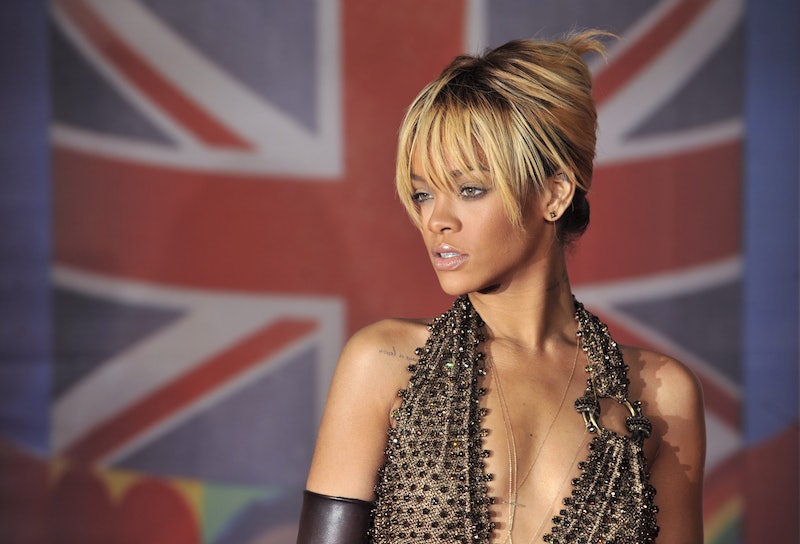 It's not every day that Queen Rihanna passes the mic to a fan, so when she does, that fan better work (work, work, work, work, work). Of course, any RiRi stan worth his salt is going to deliver to the best of his ability, but no one was expecting the kind of vocal slaydom that occurred when Rihanna handed the mic to fan Terah Jay Stewart during the Anti World Tour's Cincinnati show over the weekend. Let's just say that when it came time for him to belt out "FourFiveSeconds," he stole the show — and the look on Rihanna's face said it all.

Stewart, a Ohio University administrator who has been singing all his life (with a YouTube channel to prove it), was front row at the Cinci show on Saturday, March 19 when Rihanna bent down, put the mic in front of him, and gave him his moment to shine. Probably just expecting the guy to know the lyrics and carry a tune, Stewart undeniably kicked things up a notch or 12, bursting with the kind of vocal talent that immediately had Rihanna reeling in amazement, eyes wide and everything. Like, her facial expression is worth a thousand words.

Since the vids above show the moment from two different angles, there's really two Rihanna reactions here, and both of them are absolute gold. First, there's her response when she first hands Stewart the mic and he blesses it with his vocals. That, of course, is met with a "Woooo!" from the singer as she literally staggers backwards in response. And then there's the second reaction — the viral one — the one where her entire face contorts in awe as she tries to process what type of angelic sounds are coming out of his mouth. It's a facial expression that is perhaps summed up in a tweet from Terah Jay Stewart himself:

Stewart, for his part, has been overwhelmed and continually humbled by the attention he's received since his moment in the spotlight, tweeting his own reactions, media coverage of the moment, and, of course, his sincere gratitude for everything that's happened.

"Thank you all for the kind words and encouragement," he tweeted. "It means more to me than you will ever know."