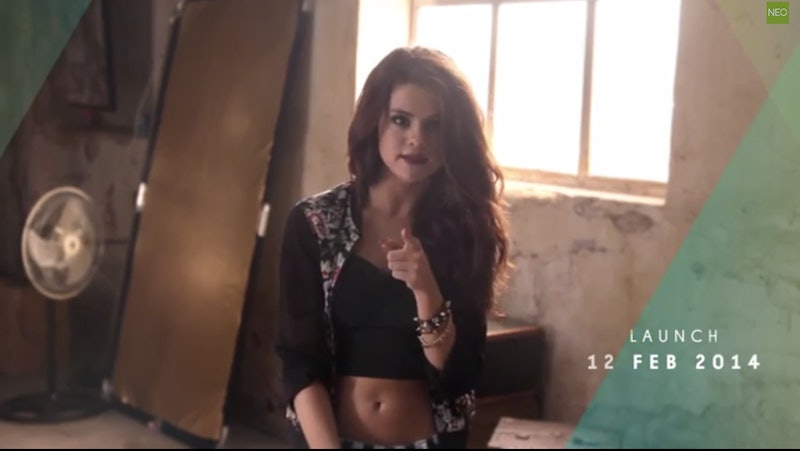 Adidas is tapping into the social media power of the tween set through second collaboration with their pop star leader. Selena Gomez is rolling out her NEO Spring collection exclusively through a social media scavenger hunt, and Adidas is no doubt banking on her more than 80 million Facebook, Twitter, and Instagram followers.

Gomez launched the online campaign #NEOsneakpeek with a YouTube video published by adidasneolabel. Each video, posted daily by Adidas NEO on Twitter, contains clues fans follow to retrieve a contest link needed to enter to win items from the new line. In order to see the video, fans must search through Adidas social platforms to find clues to its location. The assets disappear after 24 hours, so fans have to scurry.

The NEO Spring collection will be the second season for Gomez’s NEO line, her first being last Fall’s 'Rock Chic' collection, which was preceded by a Twitter Q&A with Gomez hosted by the @adidasneolabel with answers from the star posted on Vine.

Adidas may be doubling down on last year's bet by moving the entire marketing push to social and allowing Gomez to take front and center.

The genius of the new campaign is each clue is nested a midst snazzy shots of fashionably athletic models and videos of fellow NEO campaign face Justin Beiber. Even I couldn’t help but check out a collection of graphic print sweatshirts on the Tumblr page (yes, they got me).

While Gomez’s social media is engaging in the promotions, judging from their feed, the Adidas NEO accounts are taking the lead. The videos and contests will run until the official launch of NEO Spring on February 12.

If this campaign is a success, maybe next season will be a surprise debut on Instagram accompanied by a 12-part video album.

More like this
Selena Gomez & Blackpink's Post-Show Meetup Left Fans Thirsty For More
By Stephanie Topacio Long
Here Are All 703 Outfits Rachel Wore On Friends
By Kat George
Dua Lipa On YSL Beauty, Plus Her Fearless Approach To Hair & Makeup
By Erin Stovall
Hailey Bieber Just Wore A Dress Covered In Piercings For Miami Art Basel
By Dominique Norman
Get Even More From Bustle — Sign Up For The Newsletter