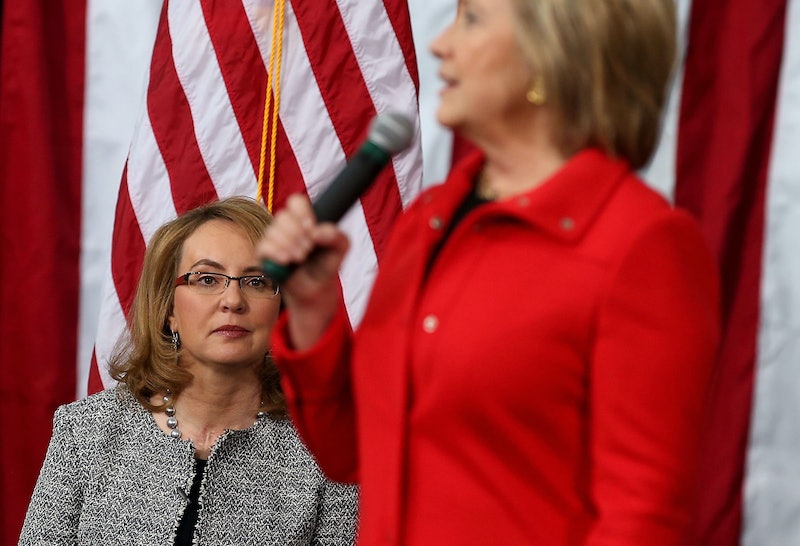 In the weeks leading up to the crucial Arizona primary on March 22, Hillary Clinton has been dedicated to continuing her family's history of winning the Grand Canyon state. Clinton defeated Barack Obama in the 2008 Arizona primary and Bill Clinton secured a monumental win in 1996 when he became the first Democrat to carry Arizona in the general election since President Harry Truman. In a recent attempt to continue on her winning streak, Clinton released an ad featuring Gabrielle Giffords that could help her win the Arizona Democratic primary.

Giffords' endorsement in the ad is a strategic move for Clinton's campaign because of Giffords' ties to the state. As a former Arizona congresswoman, Giffords was shot in the head during a meet-and-greet with constituents outside a local supermarket in January 2011. After surviving the attack, Giffords has become an advocate for gun control, an issue that Clinton has championed throughout this year's election cycle. In Clinton's newest gun control ad, Giffords explained why she is voting for Clinton, specifically citing things like how she believes Clinton will make families safer by cracking down on gun control and taking on the gun lobby.

In the ad, Giffords talked briefly about what she perceives to be a gun control issue across the country. Giffords also mentioned the reasons why Clinton is the best candidate to tighten restrictions on gun access.

I'm fed up. We have a gun violence problem, so I'm voting for Hillary Clinton. She's tough. She will stand up to the gun lobby. She will fight to make our families safer. It matters.

The ad has been running in Arizona in the days leading to the March 22 primary, which could give Clinton an edge over competitor Bernie Sanders, who has spent $1.5 million in ads there. Even without the ad, Clinton may be difficult to beat; a recent poll by FiveThirtyEight projects Clinton beating Sanders 51 percent to 23 percent.

There have been five major mass shootings in Arizona in recent years, and Giffords' attack was one of them. As one of the state's Democratic representatives, it's clear that her advocacy for stricter gun control will resonate with many of the local residents who share similar views on gun issues. Moreover, when someone is killed every day by a gun in Arizona, according to AZ Central, it is posible that many people in the state could get behind gun reform that would keep everyone safer.

By endorsing Clinton, Giffords' strong stance on gun control could help convince voters to support Clinton in the crucial primary. Receiving support from a prominent, local gun rights activist and former congresswoman could be the way Clinton secures her winning streak in the Arizona Democratic primary, which would help continue her momentum to the general election.

Watch the entire ad below: