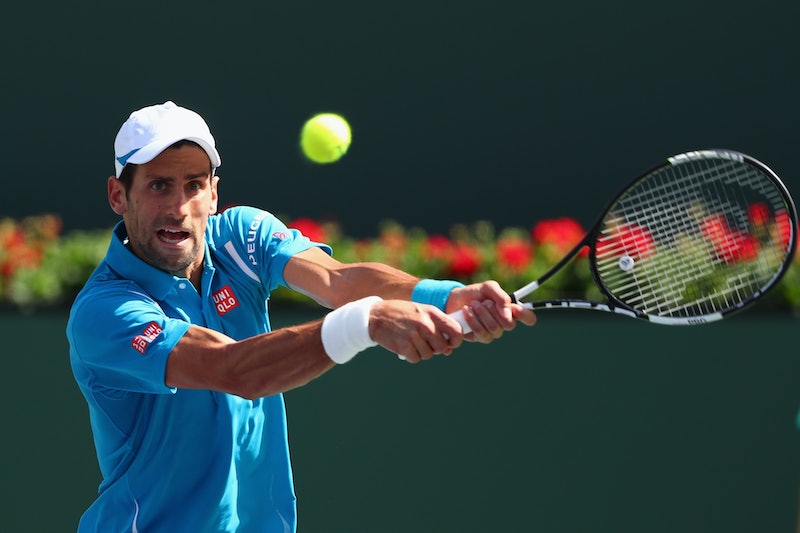 A day after BNP Paribas tournament director and Indian Wells CEO Raymond Moore dropped a few controversial comments regarding female tennis players riding "on the coattails of the men," tennis' World No. 1 Novak Djokovic waded into the discussion with his own borderline misogynistic comments. While speaking to reporters after winning the BNP Paribas Men's Final against Milos Raonic, Nova Djokovic said male tennis players do deserve higher pay but that he had "tremendous respect" for women's achievements in tennis because they do it all while suffering those pesky "hormones."

But it's really for great admiration and respect for them to be able to fight on such a high level. Many of them... they kind of have to sacrifice for certain periods of time...the family time or decisions that they make with their own bodies... in order to play the tennis and to play the professional sport.

Wow. I mean, really? Djokovic's comments are almost perfectly representational of the subtle sexism that remains so ingrained in our society. The Serbian tennis pro probably really does believe himself to be a supporter and champion of women in the sport. He even told reporters, "I'm completely for women power." But here was an opportunity for Djokovic to speak out against sexism in tennis and he failed. Not only did he fail, he — unknowingly or not — participated in it. I'm sure Djokovic had good intentions (don't they all) and might even be completely oblivious to how patronizing and backhanded his statement really is, but that doesn't make it OK. It makes it worse.

Let's step back now and look at Djokovic's comments regarding equal pay in tennis. The four major tournaments —the U.S. Open, French Open, Australian Open, and Wimbledon — have been doling out equal prize money to male and female players since 2007. But that doesn't mean debate hasn't continued to surround the topic, and Djokovic has added fuel to the fire.

To his credit, Djokovic's argument wasn't that male tennis players deserved higher prize money because they're male. He said he thought they deserve it because they're more popular. "Stats are showing that we have much more spectators on the men's tennis matches. I think that is one of the... reasons why maybe we should get awarded more," he said. But using gender as the distinguishing line in a popularity-based pay scale is sexist and flawed.

Djokovic doesn't delve into details on the stats he cites, but there's significant reason to question the accuracy of his claim. In 2015, for example, tickets for the Women's U.S. Open final sold out before the men's match. Should the male players have been paid out less at the end of that tournament? Furthermore, there are plenty of dynamic female tennis players commanding international attention. As Serena Williams (who, by the way has won 21 Grand Slam tournaments compared to Djokovic's 11, Roger Feder's 17, and Rafa Nadal's 14) told reporters at BNP Paribas, "If I could tell you every day how many people say they don't watch tennis unless they're watching myself or my sister, I couldn't even bring up that number" when asked about Moore's controversial claim male tennis players carry the sport.

"In my next life when I come back I want to be someone in the WTA, because they ride on the coattails of the men," Moore said Sunday. "They don't make any decisions and they are lucky. They are very, very lucky. If I was a lady player, I'd go down every night on my knees and thank God that Roger Federer and Rafa Nadal were born, because they have carried this sport."

It's certainly been an interesting few days for tennis. And although I don't know how they'll manage it, I'm sure the ladies of the sport will find a way to overcome their hormones and power on to continue their domination of the sport.