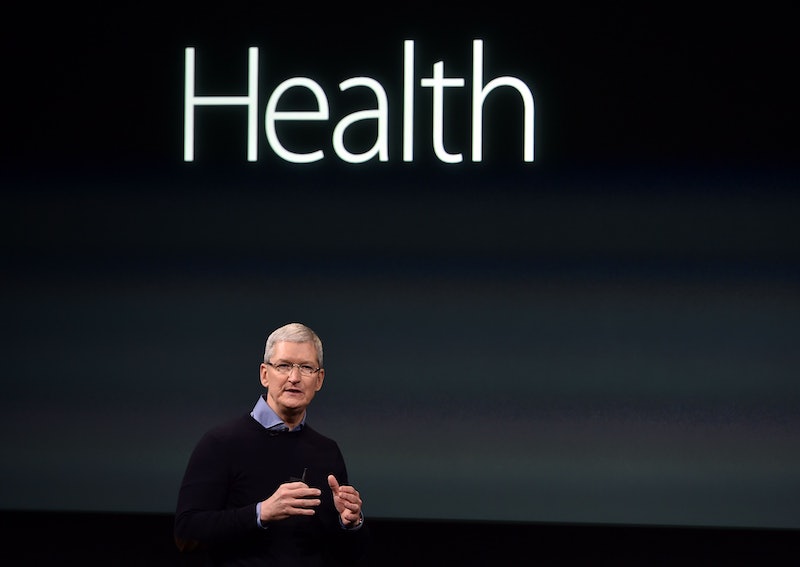 On Monday afternoon, the tech world watched as Apple unveiled its new devices, apps, and updates at a special event in San Francisco. Some of its reveals focused around new Apple applications that are central to health and wellness, both physical and mental. One component of their focus on their users' health is part of Apple's newest iOS update — the new Night Shift application.

The application determines when the sun has set in your location, then automatically changes the lighting of your phone screen to a night mode display, because the lighting that is currently emitted by our phone screens can be detrimental to our health if we are using our devices at night. According to a 2011 Sleep Foundation study, 95 percent of Americans use electronics within an hour of going to bed, noting that "artificial light exposure between dusk and the time we go to bed at night suppresses release of the sleep-promoting hormone melatonin ... making it more difficult to fall asleep."

Apple's Night Shift feature will change the screen display from the bright blue to a yellow, which should help iPhone users sleep better at night, and the lighting will also be easier on the eyes. The bright light on the iPhone screen is supposed to mimic daytime lighting, which is why it keeps users more alert if they are using their devices in the evening. The yellow lighting is better for evening use because it mimics warm, indoor lighting and is not fluorescent.

The American Medical Association has published research to show that using screens at night goes beyond just a lack of good sleep but can also be associated with a higher risk of cancer, as well as obesity and depression. Ninety percent of American adults use smartphones, and 44 percent have slept with their phones near their beds to not miss calls or text messages, according to the Pew Research Center. One Swiss study that was conducted on 13 teenage boys offered them orange-tinted glasses to wear in the evening while looking at their screens. The study found that the boys were more tired when they wore the orange-tinted glasses than when they wore regular ones.

Each year, more than 16 million Americans are affected by depression. Seeing that bright, blue lighting from a phone screen before bed can make it difficult to find sleep at night — specifically because the bright light keeps you alert and awake. This, in turn, has effects on your mood and mental health because it affects sleeping patterns, and the body's natural sleeping rhythms. Poor sleeping patterns can cause irritability and stress, and when poor sleep is regular, it is often connected to depression and anxiety. Finding ways to regulate sleeping patterns — even if that is by simply changing the lighting of a phone screen — can potentially alleviate some of the symptoms associated with depression and anxiety.

More than 42 percent of smartphone owners own an iPhone, making the company's emphasis on health and wellness a pretty important revelation during Monday's event. The implementation of Night Shift will hopefully have a positive affect on users' health, especially when so many people find themselves consumed in technology throughout the day, and often before getting to sleep.