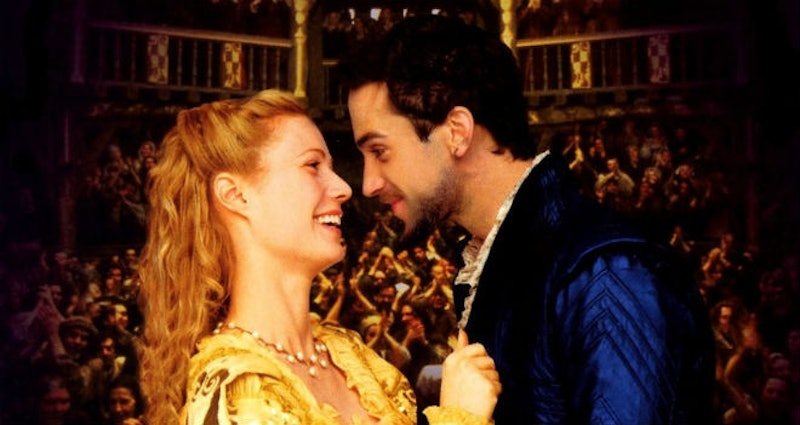 Let's go back to a simpler time, my friends, when Joseph Fiennes wasn't making headlines for playing Michael Jackson, and when Gwyneth Paltrow was best known for her acting roles, not her products on Goop. I'm talking about 1998, a year when the two aforementioned actors played opposite one another in a delightful little comedy called Shakespeare in Love . For those unfamiliar, the Oscar-winning film follows a fictionalized version of William Shakespeare (Fiennes), who falls in love with Viola (Paltrow), a young woman who longs to act on stage in a time when women were forbidden to do so. So she pretends to be a man and, through the usual farcical comedy misunderstandings and adventures, she and Shakespeare fall in love — but things turn tragic when it's discovered that Viola must marry a wealthy lord and set sail for the Americas. It's one of the '90s most memorable films, and it's one that I, for one, could watch over and over again.

The film, centered around Shakespeare's writing of his most popular work, Romeo and Juliet, with Viola as his inspiration, was a huge success back and famously beat out long-thought shoe-in Saving Private Ryan to win Best Picture at the Oscars. For that reason, many people like to deride Shakespeare in Love as an unworthy winner, or a product of a scheming awards campaign. But I believe that it's a truly great film that should be appreciated by all. If you're a fan of mushy loves stories, silly comedies, fantastic writing, and utterly gorgeous costumes, this movie is for you. Like that Shakespearian sonnet you've heard recited over and over again, I'll never get sick of Shakespeare in Love . Here's why.

For many young people who read Shakespeare in school. the language can be difficult to grasp. But the writer's plays were meant to be seen, not read, so it's always helpful when students learning Shakespeare can see the words in action. The emotions, cadences, and mannerisms of the actors make the difficult words much more understandable, and by using much of Shakespeare's actual text, Shakespeare in Love accomplishes the same thing.

2. It Touches On Some Interesting Gender Politics

As Viola tries to work her way through the world of men, she experiences not only the way that men think of, talk to, and act towards each other, but also their experiences with women. Through this, Viola realizes how ludicrous many of the expectations placed upon her simply for being female are. She transforms herself into a man because she longs to act, but learns about gender inequality in the process.

3. It Features One Of History's Most Powerful Women

Queen Elizabeth I was not only one of the most powerful monarchs in world history, but she arrived to her seat of power experiencing illegitimacy, familial strife, religious conflict, war and opposition from her country. Once on the throne, however, Elizabeth was a lively cultivator of the arts, leading to the flourishing career of playwrights such as Shakespeare.

4. And The Woman Who Plays Her Is Just As Amazing

Ask anyone, and they'll tell you that Dame Judi Dench's portrayal of Queen Elizabeth is nothing short of fantastic. Fun fact: Dench is only on screen as Elizabeth for about six minutes, but went on to win Best Supporting Actress at the Oscars. It was the second-shortest performance in history to win that particular award.

5. It Shows A Charming Side Of Ben Affleck

Though now Affleck is a somewhat controversial figure, 1998 featured him in his charming heyday. Playing Elizabethan actor Edward "Ned" Alleyn allowed him to ham it up, and from the first moment he bursts through the theater doors and demands to know, "What is the play and what is my part?," it's easy to fall in love with him. Ned's friendship with Will and his intensity makes the historical figure incredibly watchable.

6. And The Rest Of The Supporting Cast Is Just As Good

Really, there's no bad acting in this movie. From Geoffrey Rush's eccentric theater owner, to Colin Firth's weaselly Lord Wessex, to Rupert Evert's Christopher Marlowe, everyone in this film is at their best. It's through these side characters where much of the film's comedy shines through. While Will and Viola are there to make audiences swoon, the rest of the cast makes us laugh.

In the first scene, we see Shakespeare crumpling up balls of paper and throwing them around the room, landing them near props which represent or refer to his other works. The first lands next to a skull, a reference to Hamlet, and the second lands in a chest, a reference to The Merchant of Venice. During the auditions scene, the actors recite the line, "Was this the face that launched a thousand ships?" from Christopher Marlowe's Doctor Faustus. Marlowe was one of Shakespeare's contemporary rivals, so it's rather amusing that actors would recite his lines while auditioning for Shakespeare. And the film's entire conclusion is a sharp homage to Twelfth Night.

8. Viola Is Ahead Of Her Time

Though her status and the time period restrict her rights and freedom, Viola is no doubt a free-thinking woman. She longs to act on stage, appreciates poetry, and, at a time when marriage is a contract for the transference of money, yearns for true love. She's an independent woman who would fit right in in modern times.

Naturally, any film that features Shakespearian sonnets, lines from Romeo and Juliet, and a forbidden romance is going to be romantic. But Paltrow and Fiennes have some serious chemistry here. From their initial meeting, to their very own balcony scene, to their tear-filled parting, the romance between Will and Viola is one for the ages.

Don't you just want to re-watch this movie right now?