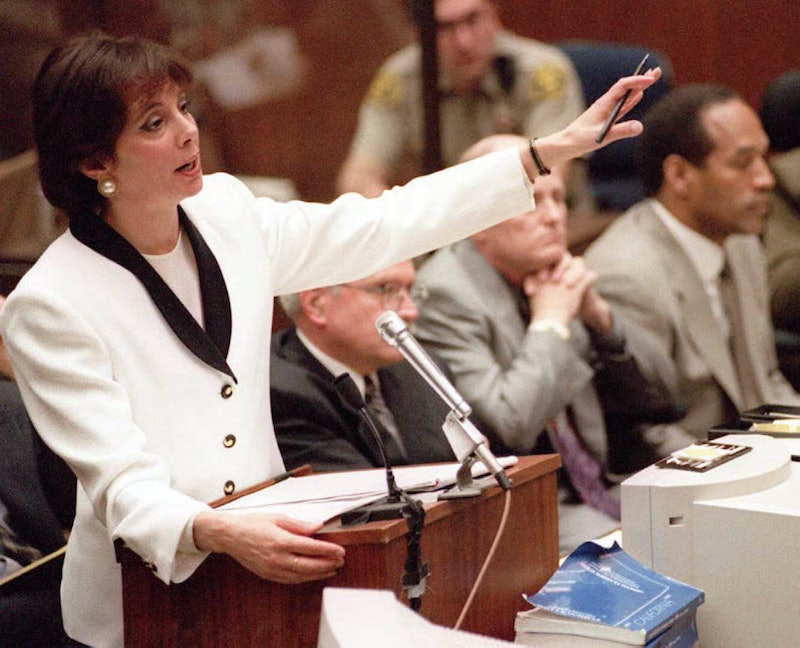 As a child of the 1990s, I couldn't escape updates on the O.J. Simpson murder trial. My mother had it on the TV all the time through 1994 and 1995, and even at my young age, I was familiar with all of the crucial names and details. One such name was Marcia Clark, a then-40-year-old deputy district attorney who was designated the lead prosecutor of the case. From Judge Lance Ito to Johnnie Cochran, Robert Kardashian to Christopher Darden, these characters came together in a blur of childhood memories, toeing the line somewhere between criminal justice and pop culture knowledge, and I've since wondered what became of these people, who were once ever-present and have since faded away. Not all of them are living, like Cochran and Kardashian — this was over 20 years ago, after all — yet some, like Clark, are still around. So where is she now?

As it turns out, Clark is not a huge fan of American Crime Story: The People v. O.J. Simpson. She recently appeared on The View, where she explained that seeing clips of the show was like "reliving a nightmare," calling it a "painful experience." This relates directly to an instance some years ago during the O.J. trial which made headlines and created some great difficulty in Clark's life. Her ex-mother-in-law, Clara Horowitz, sold personal photos — including one of Clark topless in St. Tropez back in 1979 — to The National Enquirer. The photographs made national and international headlines and made waves regarding both her ability to perform her duties as a prosecutor and her ability to parent her five- and three-year-old sons. She was criticized in nearly every way possible.

Since then, Clark has written crime novels and a memoir about her experiences as a prosecutor in the Simpson trial, as well as offered legal commentary for various media outlets. Her latest novel, Blood Defense, hits bookstores on May 1. She began her career as a writer when Lifetime asked for consult on a drama called For the People, asking her to write scripts for the network. Naturally, she drew from some life experience for the scripts and her own work.

More recently, she states she is probably unlikely to watch The People v. O.J. Simpson, as it is similar to a "train wreck" — although she is honored that Sarah Paulson is playing her. She explained to Vogue:

When I first heard they were going to do this, I kept praying that somehow, something would go wrong. It’s not entertainment for me. It’s a tragedy. Whatever anybody thinks about Simpson’s guilt, two innocent people were brutally murdered. And the killer was never brought to justice. It hurts.

Whether or not she ultimately watches the "train wreck," her love for crime thrillers remains. She was "shredded" by the Trayvon Martin case, and she couldn't resist Making a Murderer — or even Pretty Little Liars — proving she is most certainly still an active mind in the field. Without a doubt, Clark has influenced the public perception of criminal justice, and it looks like she will continue to do so — on her terms.