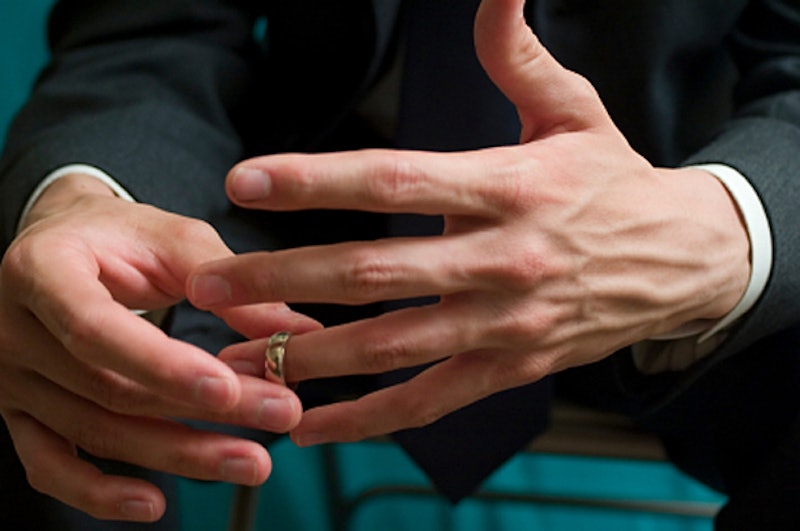 Infidelity is likely the most hurtful brand of betrayal, and, unfortunately, it’s all too common — the American Association for Marriage and Family Therapy found that 25 percent of married couples have dealt with infidelity, and, presumably, this number is higher for non-married couples. While overcoming infidelity is an enormous struggle, there are ways to survive it, whether or not you decide to stay with your partner. Surround yourself with people you love and trust, and bear in mind these eight tips for getting through it:

Dr. Anne-Renée Testa, psychologist and author of The Bully in Your Relationship: Stop Emotional Abuse and Get the Love You Deserve, frequently meets with patients who’ve attempted to uncover the secret details their partners’ infidelity, sometimes tracing calls or following the other man or woman home. This is a bad idea. “What does it really accomplish? Becoming a detective doesn’t solve anything,” Dr. Testa told Bustle. Even if you find out a revealing piece of information — what happens next? Playing detective will only fuel your rage, inhibiting your ability to move on and feel okay again. Confront your partner head-on about his or her infidelity; snooping around just adds to the heartbreak.

It’s natural to experience feelings of inadequacy after a partner cheats. You may find yourself asking yourself: What did I do wrong to make him do this to me? Why did I make her cheat? This type of thinking is not only torturous, it’s also misguided. Dr. Testa urges her patients to recognize that the problem is not theirs, however much they’re suffering from it. The reasons for infidelity are vast and diverse; it would be reductive — and counterproductive — to believe that you caused your significant other to cheat.

3. Find a neutral environment in which to talk about it.

Ideally, a third party (a mutual friend, acting as a ref) is present to moderate the discussion, keep it fair, and keep accusations, screaming, and storming out to a minimum. “The way to really reconcile is to sit down and talk,” Dr. Testa tells Bustle. “It’s important for both parties to ask themselves: why did we get together in the first place? And why did things change now?” Looking at why the relationship or marriage began will provide perspective, allowing both sides to situate the infidelity in the context of a long and complicated relationship.

Sometimes, the only neutral space to talk about infidelity is in a therapist’s office. That's okay. “It’s extremely hard to get over infidelity alone,” says Dr. Wendy Walsh, a psychotherapist and author of The 30 Day Love Detox. “When handled the correct way, cheating can be growth-enhancing for a relationship. The road to intimacy is one paved with rupture, followed by repair.” By sharing and discussing their vulnerabilities as part of the repair process, a couple can actually come closer.

5. Take care of yourself.

Set time aside to focus on yourself — whether that means exercising more or throwing yourself into a new hobby. Don’t, however, vow to lost 40 pounds with the goal of making him jealous. Any action rooted in rage rather than self-love will ultimately hurt you and prolong the healing process. Investing time into yourself during the rough patch will both enrich and distract you. “Remind yourself: I’m worth more than this,” Dr. Testa advises. And taking care of your body and your spirit — through meditation, yoga, or even long walks with your dog — will help you stay in touch with your self-worth and independence, regardless of the fate of the relationship.

For the sake of your sanity and for your relationship (if you’re hoping to salvage it), look at the cheating as just one event in a long and nuanced life together. “Spouses who minimize the event,” Dr. Walsh says, “can recognize that their partner is a good man, that this not his normal personality, this is a just a one-time thing, and they’re both able to get over the affair better.” Everyone deserves a second chance; no one gets a third chance. “There are plenty of good relationships where people throw in the towel after one act of infidelity,” says Walsh. If cheating is a repeated occurrence, however, minimizing the betrayal is not, and should not, be possible.

7. Set a timetable for recovery.

The person who was the victim of the cheating should dictate the timetable for recovery, taking however long she needs to get through the rough patch — even though the cheater might want to put the event behind him or her as quickly as possible. Part of the recovery process involves rejecting the status of victim, which is not easy. “One of the most dangerous parts of conflicts is to be perpetually stuck in the victim role,” Dr. Walsh says. And when you reduce yourself to the role of victim, you reduce your partner to an object, or as Dr. Walsh puts it, “a fricking cheating liar for the rest of his life." Allow yourself time to hurt. Do not rush through the grieving process, but make sure to actively plan for reconciliation. You set the pace. You can even allow yourself a few days to consider him a "fricking cheating liar."

There is no correct way to handle infidelity — the circumstances of each case are different and should be approached differently. If, in your attempt to minimize the affair, it becomes clear that the infidelity is not a one-time thing and you suspect it will happen again, it's time to let him or her go. No amount of therapy or reminding yourself why you fell in love in the first place will repair a relationship littered with distrust and betrayal. “If it is constant cheating, and repair isn't happening, you have to draw the line,” Dr. Walsh says, especially if the partner who cheated is unwillingly to confront the conflict and talk about it in an honest, compassionate, and non-accusatory way. If you're at this point, know that the end of the relationship is not the end of your world. Before you can emotionally understand this, though, says Walsh, you have to “intellectually understand that the relationship was a step forward in your growth.” Baby steps.