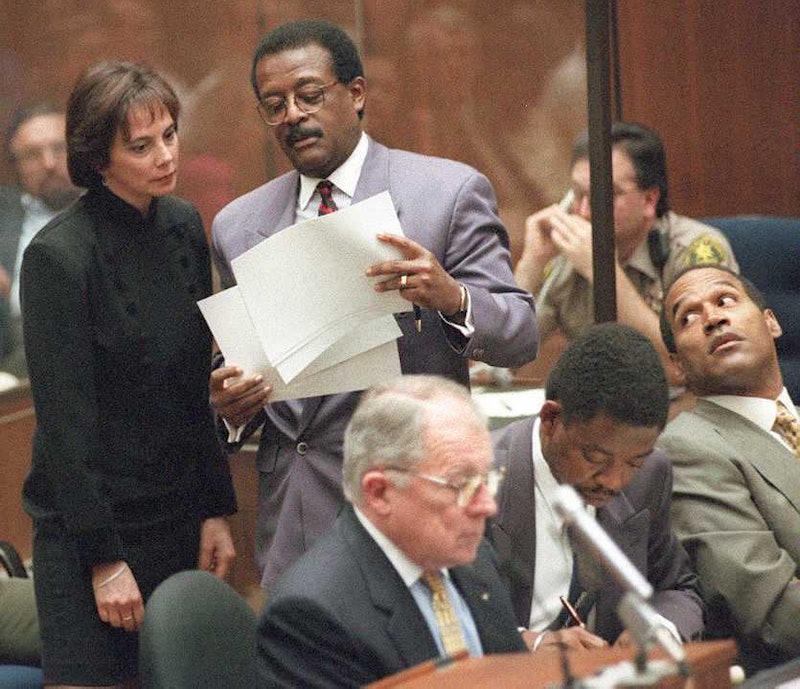 In the March 22 episode of The People v. O.J. Simpson: American Crime Story, "A Jury in Jail," a strong focus is placed on the jurors in the Simpson trial. Although the idea of staying in a hotel for a few months initially seems appealing, the jury quickly learns that they'll be under the constant supervision of deputies, TVs have been removed from their rooms, and even the hotel pool is off limits. Sequestered for nine months, it's no surprise that there was apparently some conflict among the jurors — but it seems the real drama was the battle between Marcia Clark and Johnnie Cochran over juror dismissals.

A rapid series of dismissals is depicted in this episode. Cochran confronts Clark while she's taking a cigarette break outside the courthouse and accuses her of "tipping off" Judge Ito in an effort to remove black people from the jury. She fires back that: "Back alley stuff isn't my game; it's yours. You're always talking about the truth. Well, the truth came out." From there, it escalates — jurors are dismissed for a variety of reasons, including taking notes that are allegedly for a future book and working for Hertz, a company for which Simpson was a spokesperson. Both Clark and Cochran set their sights on the alternates they want on the jury and they exchange contentious glances with one another every time a new juror is named. The sheer number of dismissals is not exaggerated for the show — according to USA Today, a total of 10 jurors were dismissed from the Simpson trial.

It comes to a head when, with just four alternates left, Ito receives an anonymous letter from someone claiming to be a literary agent. The writer says he or she received a book pitch from a juror who wants to champion Nicole Brown Simpson in a book titled Standing Alone: A Vote For Nicole. Clark asserts that the letter was clearly sent by a member of Cochran's team and it should be thrown in the trash where it belongs. Fed up, Ito tells Clark and Cochran that he'll meet with the jury himself and orders them to "get out" of his office. Although the show doesn't clarify the outcome of this particular incident, The Chicago Tribune reported that juror Francine Florio-Bunten was dismissed due to an anonymous letter claiming she or her husband had signed a book contract — an allegation which she denies.

When the jurors revolt after deputies are dismissed, it marks the first time that the prosecutors and defense attorneys appear equally troubled and confused for the same reasons. Even Cochran states, "we've lost control." After another juror is dismissed due to a nervous breakdown in the hotel dining room, Ito tells Cochran that, "whatever you and Marcia are doing, you need to stop." Cochran approaches Clark again with his version of a truce — a coffee. It appears they did reach a détente at this point, most likely because they both realized they were getting dangerously close to a mistrial.

Still, they were shown making some fairly serious allegations towards one another during the series of dismissals. Did this really happen? Since these interactions took place behind closed doors, it's unclear whether or not the dialogue was dramatized. However, it's safe to assume these long meetings became combative since both sides had so much at stake. In May 1995, The New York Times reported that another juror had been dismissed after a long meeting:

The O. J. Simpson trial took one more odd turn this evening when yet another juror was dismissed after a mysterious four-hour closed-door meeting that included Judge Lance A. Ito, prosecutors, defense lawyers and investigators for both sides.... Upon leaving the meeting, none of those in attendance would say which juror had been dismissed nor would they offer any explanation for the dismissal.... When asked by reporters what had taken place in the meeting, one prosecutor, Christopher A. Darden, snapped, "Get a life!" and strode off to the elevators.

Neither Clark nor Cochran has ever publicly accused the other of engaging in shady dismissal tactics, but it's no secret that their dynamic was incredibly contentious (to say the least). In addition to mocking Clark's childcare struggles, TIME reported that Cochran described Clark as "hysterical" during a tense day in court and she called him out for the sexist remark. For her part, Clark had strong words about Cochran after the trial — in her 1997 book Without a Doubt, she described him as " a hypocritical, two-faced bastard."

The attorneys clearly didn't have much respect for one another, so it wouldn't be surprising if they did hurl accusations in the heat of the moment — but, since these meetings took place behind closed doors, the exact details of these exchanges are unclear.