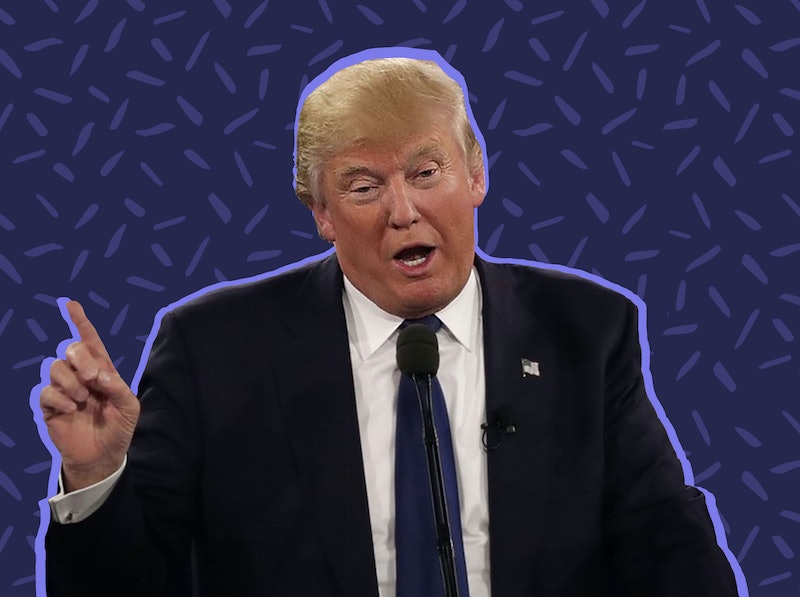 Following the horrific terrorist attacks in Brussels that have killed at least 34 and wounded 187 people Tuesday, President Obama commented that the attacks were "yet another reminder that the world must unite. We must be together, regardless of nationality, regardless of race or faith, in fighting against the scourge off terrorism. We can and we will defeat those who threaten the security of people all around the world." But what would a President Trump have said and done after the terrorist attacks in Brussels?

Oh, don't worry, he'll tell you. Describing the scene as a "disaster" and warning that "this is just the beginning," Trump told Good Morning America host George Stephanopoulos that if he were in charge today, "We would strengthen up our borders; we would be very careful who we allow into our country. ... We're taking people we have no idea where they are coming from, who they are, where they were. We have people coming in with no documentation into our country and they could be ISIS, you don't know. You have no idea where they are are coming from."

Clearly, a Trump presidency is a scary scenario for many people — especially people of color, immigrants, and American Muslims — to imagine. Trump has already talked about building a wall between the United States and Mexico, making Muslims register in a government database, and keeping Syrian refugees out of the country. His response Tuesday to the terror attacks in Belgium confirm that his approach at defense would be anything but tempered (or lawful, for that matter), and would likely target brown people in this country.

In another interview on Fox News' Fox and Friends, Trump added, "I will tell you, I've been talking about this a long time, and look at Brussels," Trump said. "Brussels was a beautiful city, a beautiful place with zero crime. And now it's a disaster city. It's a total disaster, and we have to be very careful in the United States, we have to be very careful and very vigilant as to who we allow in this country."

But there's a flaw with that logic: the Paris attacks suspect Salah Abdeslam, whose arrest many are speculating is behind the attacks Tuesday in Brussels, grew up in the city — a fact which Trump acknowledged. "One of the most disturbing things is the man that was caught, yesterday — and this is retaliation for that — the man that was caught yesterday was living right where he grew up, he was living in the neighborhood, everyone knew he was there and they never turned him in."

He then went on to issue an ominous warning regardless, tied to the influx of Syrian refugees:

This is just the beginning. It's just going to get worse and worse because we are lax and we are foolish. We are foolish. At this point we cannot allow these people to come into the country. We are allowing thousands and thousands of people to come into our country and we don't even know where they come from and who they are. We have to be very careful. We're not babies. We can't do this anymore. We can't have these attacks any more. We can't have World Trade Centers anymore and planes flying into the Pentagon. It's time to be smart. It's time to look carefully.

In other words, Trump is suggesting that he would try to make torture tactics legal, or disregard the rules of warfare altogether. He's flip-flopped over his campaign about whether or not he would use waterboarding, but this statement makes it pretty clear that he would try it, or at least consider himself above the law. Pretty scary stuff.

By comparison, Democratic presidential candidate Hillary Clinton responded to the attacks in Belgium by telling the TODAY show Tuesday that while U.S. has to be "absolutely smart and strong and steady in how we respond," targeting immigrants indiscriminately is not the answer. "It's unrealistic to say we're going to completely shut down our borders to everyone," she said. "I know that Americans have every reason to be frightened by what they see, [but] we've got to work this through, consistent with our values."

Democratic candidate Bernie Sanders didn't address immigration in his response to the attacks, simply saying on Twitter, "We offer our deepest condolences to the families who lost loved ones in this barbaric attack and to the people of Brussels."

Though the attackers have yet to be identified, in a Facebook post Tuesday, Republican presidential candidate Ted Cruz was as inflammatory as Trump when he called the attacks in Brussels "just the latest in a string of coordinated attacks by radical Islamic terrorists perpetrated those who are waging war against all who do not accept their extreme strain of Islam," adding, "Radical Islam is at war with us," and accusing Obama of refusing to "acknowledge this reality."

Yes, how dare he not condemn an entire group before there is even a suspect. You can watch President Obama's full speech in Havana, Cuba below.