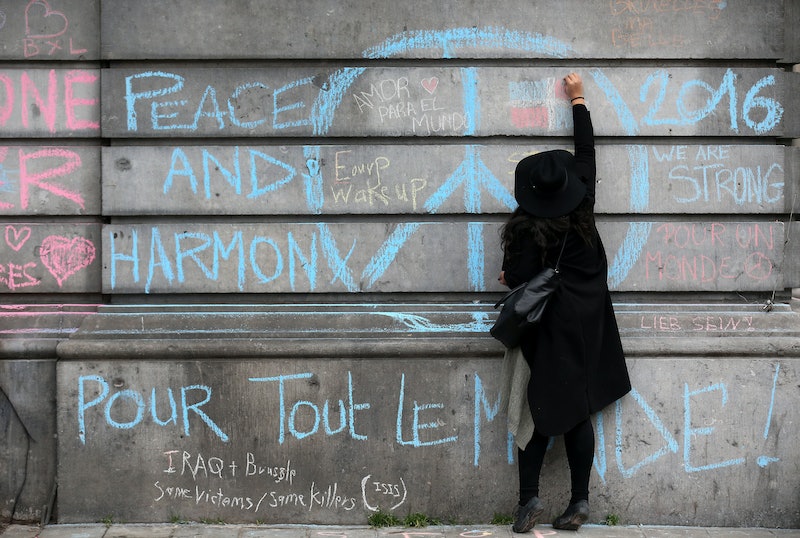 Tuesday’s deadly terrorist attacks in Brussels, which killed more than 30 people in three explosions at the city’s airport and a metro station, are at once shocking and sickeningly familiar, the latest in a horrifying line of violence that includes the terrorist attacks in Paris last November, and stretches back to the September 11 attacks in 2001. We can predict that, amid calls to support victims and root out terrorism, there will also be people who blame Islam as a whole for these attacks, as if all Muslims were responsible for the actions of the violent extremists who planned and carried out these atrocities.

Although the urge to place blame for these crimes is a natural one, it’s essential to remember that Muslims as a group — made up of 1.6 billion diverse people all over the world— aren’t the right target. The attacks in Brussels and similar acts of terrorism may have been committed by religious extremists — ISIS claimed responsibility for the attacks Tuesday — but these people do not represent or speak for the vast majority of Muslims. In fact, as President Obama pointed out after the terrorist attacks in Paris last year, far more Muslims have been killed by ISIS than non-Muslims. That’s not to minimize the importance or tragedy of the killings in Brussels on Tuesday, but to simply point out that ISIS’s violent religious extremism threatens everyone — including, and perhaps especially, other Muslims.

In the wake of the acts of terrorism in Brussels — as with the terrorist attacks in Paris, San Bernardino, the Boston Marathon, and many other places — Muslims from across the globe have publicly expressed their condemnation of terrorism, often arguing that terroristic violence fundamentally contradicts the teachings of the Qu'ran. As a number of people have pointed out, the fact that Muslims are called upon to condemn terrorism every time a terrorist attack by ISIS, al-Qaeda, or other extremist group claiming to represent Islam occurs is somewhat problematic in itself. Obviously, terrorism is profoundly wrong and should be condemned, but the insistence that Muslims everywhere constantly disavow it implicitly suggests that Muslims’ disapproval of senseless violence and murder isn’t already a given — an assumption that doesn’t seem to apply to other religious groups. In a 2015 interview with MSNBC, Dalia Mogahed, research director at the Institute for Social Policy and Understanding in Washington, responded to the question of whether more Muslim leaders should denounce ISIS (To be clear, many Muslim leaders have done so, over and over again). She said:

I think we should take a step back and ask a different question, which is: ‘Is it justified to demand that Muslims condemn terrorism?’ Now that might sound a little radical even asking it. The reason I say that is this.

Condoning the killing of civilians is, to me, about the most monstrous thing you can to do. And to be suspected of doing something so monstrous, simply because of your faith, seems very unfair.

Now when you look at the majority of terrorist attacks in the United States, according to the FBI, the majority of domestic terror attacks are actually committed by white, male Christians.

Now that’s just the facts. When those things occur, we don’t suspect other people who share their faith and ethnicity of condoning them. We assume that these things outrage them just as much as they do anyone else. And we have to afford this same assumption of innocence to Muslims.

(quote via The Guardian)

Nevertheless, Muslims from all over the world, ranging from major world leaders to social media users, have come out in the wake of terrorist attacks to denounce terrorism and make clear that violence does not have a place in their faith. These are only a few examples:

Following the Paris and Brussels attacks, as well as the Charlie Hebdo killings last January, Muslim Twitter users tweeted with the hashtag #NotInMyName to declare that terrorists to not speak for them.

On Tuesday, Al-Azhar, the Cairo university generally regarded as the center of Sunni Islam education, released a statement denouncing the terrorist attacks on Brussels, arguing that the attacks “violate the tolerant teachings of Islam.” Al-Azhar added, “If the international community does not unite to confront this epidemic, the corrupt will not stop from committing heinous crimes against the innocent.”

3. The Muslim Council of Britain took out an ad.

In November, after the terrorist attacks in Paris, the Muslim Council of Britain, an umbrella organization for hundreds of mosques, schools, and Islamic organizations, took out full page ads in two major newspapers to denounce terrorism, declaring, “With one voice, British Muslims condemn the Paris attacks unreservedly.” The ad stated, “The barbaric acts of Daesh [aka ISIS] have no sanction in the religion of Islam, which forbids terrorism and the targeting of innocents.”

The Muslim Council of Britain has also condemned the Brussels attacks.

Many Muslims took to Twitter after the Paris attacks in November to condemn terrorism, offer their support for Paris, and declare, “I Am A Muslim.”

Muslim leaders in Belgium and Europe have condemned the terrorist attacks in Brussels. Executive of Muslims in Belgium (EMB), a major Muslim organization in Belgium, released a statement saying, “These dramatic events in the heart of Europe undermine the efforts of society … and the full Muslim community in Belgium to harmoniously live together… That is why, in the name of all Muslim citizens, the EMB calls for unity and unanimity to together establish a coalition against violence and terrorism.”

On Tuesday, Said Kamli, director of the Federation of Islamic Organisations in Europe, described the Brussels attacks as “barbaric acts,” adding, “We do not support people who do these things. We hope they face justice.” Politico reported that Muslim community members also “made a point of showing their solidarity with victims, joining the throng of Belgians looking to give blood to the wounded.”

6. The Organization of Islamic Cooperation condemns the Brussels attacks.

The Organization of Islamic Cooperation is an “intergovernmental body representing 57 sovereign member states from across the Islamic world,” as described by Variety. On Tuesday, Iyad Ameen Madani, secretary general of the OIC, released a statement strongly condemning the attacks, and urging “all governments across the world, international organizations and civil society institutions to engage in a concerted joint firm action to combat the scourge of terrorism, which represents a serious threat to international peace and security.”

In 2014, more that 120 Muslim religious scholars banded together to write an open letter criticizing ISIS ideology as un-Islamic. The scholars used a detailed analysis of the Qu'ran, across 18 pages, to argue against ISIS’s interpretation of Islam. An executive summary of the letter outlines 24 key points, including, “It is forbidden in Islam to kill the innocent.”