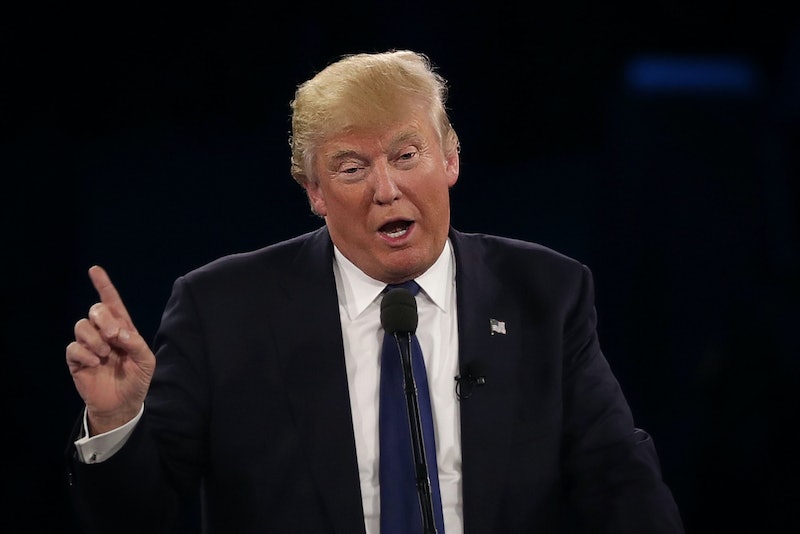 Following Tuesday's terrorist attacks, which killed at least 34 people and injured at least 170 in the Belgian capital, presidential candidate Donald Trump used the Brussels attacks to try to drum up support for his campaign. The candidate is on the ballot in Utah and Arizona primaries today.

Upon learning of the attacks, Trump lamented on Twitter that Brussels used to be a safe and beautiful city, and that the U.S. needs to be vigilant and smart in response to terror. He then called into Fox & Friends and called the city a "total disaster," and warned that "we have to be very careful in the United States, we have to be very careful and very vigilant as to who we allow in this country," ignoring the fact that the Paris attackers who called Brussels home were raised there.

These words are unsurprising when coming from the divisive, bombastic candidate — he has often employed xenophobia bordering on racism throughout his campaign, both in calling for the U.S. to build a wall on the Mexico border and in saying that we should stop allowing Syrian refugees into the country for fear they will have ties with terrorism. Following the Paris attacks in November, he called the influx of refugees a "Trojan horse" of terror.

But while it is a familiar routine for Trump to play on voters' fears in hopes that they will support his campaign, he outright made a call for votes on Twitter a few hours after the attacks.

The terror attacks have already been widely politicized, with most of the major candidates releasing statements or giving interviews on the event, though none but Trump have as directly used this as a vote-getting opportunity. But it could backfire when experts like Malcolm Nance, head of the Terrorism Asymmetrics Project, say that ISIS "[is] probably cutting videos of this right now" to aid in recruitment.