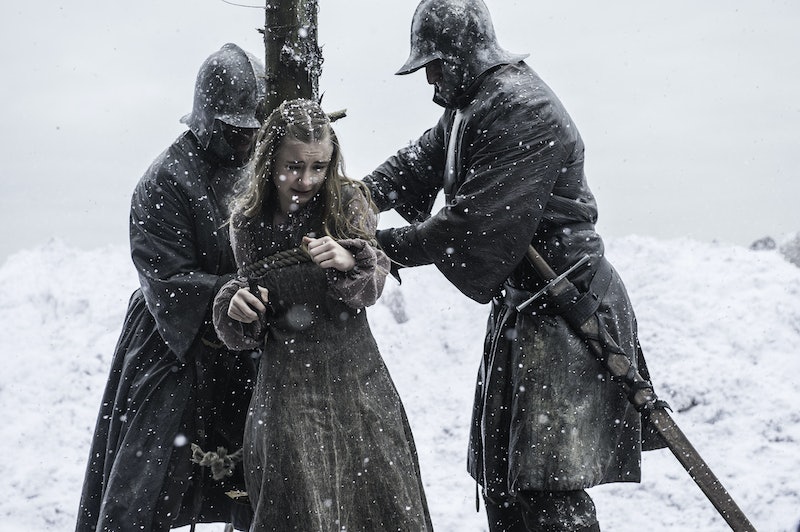 If you're watching Game of Thrones, chances are it's not because you were looking for a light-hearted comedy about the joys of life. Most likely it's because you are a glutton for punishment like the rest of us and can't wait to see what terrors happen next to your favorite characters in their pursuit of, if not the Iron Throne, then at least a return to normalcy. And sometimes it's nice to experience some good ol' catharsis through the horrors that undergo the characters of Game of Thrones. I've never had to leave my family and become betrothed to someone like Joffrey Baratheon, so watching Sansa do it makes me feel a heck of a lot better about whatever I deal with (ugh I asked for this latte with almond milk what is this soy?). And sure, sometimes those Game of Thrones moments make us cry, but the tears really help with the whole catharsis thing.

It's nice to cry, but I'm sure we could do without some of the moments that lead to the tears. For example, I could totally have done without Ned Stark being executed or Jon Snow and Ygritte breaking things off in their own tragic way. The following are the 11 moments that made us cry in Game of Thrones.

1. When Ned Stark Was Executed

It was so many seasons ago, and I still tear up when I look at GIFs of his noble face.

Oh, Theon, you poor little lost lamb. How could you think your horribly evil father would back you up on this one? Theon's lack of direction would make any 20something cry in agreement.

3. When Jaime Lost his Sword Arm

Sure, Jaime pushed Bran out of a window with one of his arms, and that arm deserved to be punished for its crimes. And, yeah, he's done a bunch of horrible evil things. But Jaime's entire livelihood was his swordsmanship and knightliness. Watching him lose that ability was quite depressing. I actually sobbed.

4. When Jon and Ygritte Parted Ways As Enemies

I've broken up/been broken up with in some pretty tear-inducing ways, but nothing can quite compete with being shot at three times by the woman you once loved. I, like the Wilding warrior, wish Jon and Ygritte had just stayed in the cave where they first hooked up forever and ever and never left.

5. When Shireen Was Burned At The Stake

Come now Melisandre, was that really necessary? Was it? Thanks for the tears, I guess.

6. When Arya Told Nymeria To Escape

Remember the scene in Air Bud when the little boy tells Buddy "I don't want you anymore?" There's a similar moment in Game of Thrones, when Arya forced her puppy to run off. It was necessary, of course, because we didn't want Nymeria to get executed, but it was still quite depressing.

7. When Master Aemon Stands Up For Jon

Happy tears here, guys. Master Aemon is probably the coolest dude in the Night's Watch. And, when Jon comes back and admits to all his crimes (bedding the enemy, killing Qhorin), Aemon stands up for our boy against the rest of the counsel. It is wonderful to see someone being nice to a Stark or Stark bastard for once, and it brings tears to the eyes.

7. When Tyrion Found Out Shae Had Found a New Boyfriend

His father? Really Shae? Really? It's so hard for him to trust anyone, because he's been treated so horribly, and you didn't make it any better. I don't completely agree with Tyrion's actions afterward — slaughter of ex-lover and father is frowned upon — but I do agree with his sads.

8. When Daenerys Locks Her Dragons Up

OK, yeah, her dragons seemed to have murdered a few children and sheep, but the cries of Dany's little baby dragons as she locked Rhaegal and Viserion up under Mereen were so sad.

She never got to tell him she loved him. To top it off, she couldn't really even avenge his death, because all she saw was a shadow man killing him. Poor Brienne.

10. When The Night's Watch Turned On Jon Snow

What a horrible way to end Season 5. I've been crying since the finale episode. Poor Jon can't catch a break anywhere.

11. When Sansa Realized Her Aunt Lysa Arryn Was Crazy

At first, Sansa thought she had dodged a bullet; she had escaped marriage from all the Lannisters she was betrothed to and was hanging out with her sister. Then, she realized the weird love-obsession Arryn had for Littlefinger (who meanwhile has a weird thing for Sansa) and knew there was no such thing as luck for a girl like her. I cried, because I just wanted Sansa to catch a break, but it wasn't going to happen.

Those were a lot of tough, tear-inducing moments, but it's just going to get worse for our favorite characters come Season 6. Winter is coming, and with it the inevitable tears. May the seven gods be with us and give us strength.