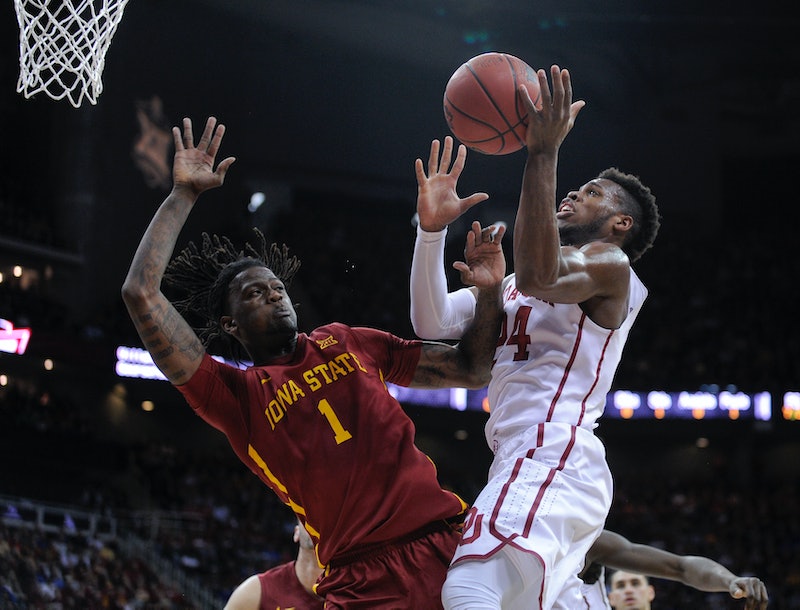 There is a perception of disjoint when talking about men's college basketball as a feminist. Of course, men can, and, dare I say, should, be feminists too, and there are six men in the Sweet 16 that exemplify the respect and admiration for women that can only be described as feminism. This is my starting five (and coach!) for the All-Feminist NCAA Tournament Team — in other words, the most feminist March Madness players to watch out for this year. Somewhat unsurprisingly, all of these young men cite Mom as a major inspiration and influence.

The media's depiction of college athletics on the whole can often skew toward the scandalous, and saying that there is a lot of work to be done to make colleges and universities places of equal opportunity (and safety) for men and women would be an understatement. But there are players and moments to be celebrated. Those moments just don't grab the world's attention with the same intensity.

You won't find any disrespectful tweets coming from these six feminists, and you can often find them cheering on their female counterparts at their respective schools' women's basketball games. Basketball players have been vocal about feminism before — just last year, the NBA and WNBA partnered with LeanIn.org to promote gender equality at home and at work with their #LeanInTogether campaign, which featured basketball stars Russell Westbrook, Skylar Diggins, LeBron James, Elena Delle Donne, Stephen Curry, and more.

So, without further ado, here is the 2016 All-Feminist Team from the 16 teams still dancing.

Iowa State's big man has made an amazing turnaround since the beginning of Big 12 conference play this season, and he credits his mom for helping him see the changes he needed to make. She told him, "your attitude becomes your altitude," suggesting that his emotions were getting the better of him on the court and leading to mistakes, frustration, and eventually, a decline in playing time. And this isn't the first time McKay's mom has changed his life for the better. In an interview with the Des Moines Register , he explained “Growing up, it was pretty much my mom who was around the most. She’s my everything.” McKay and the Hawkeyes will take on top seeded UVA on Friday.

As much as it pains me to say this as a Duke grad, Brice Johnson is one of the most likable players in the 2016 NCAA Tournament, maybe of my lifetime. There is boundless evidence of Johnson's feminist nature on his social media. His girlfriend Faith Scuggs is a player on the Duke women's basketball team, and he supports her at every game he can, even though she plays for his cross-town rival. The respect he has for her is extremely apparent.

Johnson also lives and plays in the memory of his mother, who passed away from cancer when he was only 14 years old, a tragedy he shares with Scuggs, whose own mother died just two days after his. He often includes the hashtag #4HerRSJ as a reminder of what keeps him going.

There is a joke among Malcolm Brogdon's brothers that the accomplished senior guard has "no personality," because he is so extraordinarily disciplined. But Brogdon's true nature shined through when he was choosing where to enroll for college. He was offered a spot on the Harvard basketball team but chose UVA instead to save his parents money, since Ivy League schools don't give scholarships to athletes. And pretty much every time Brogdon needs advice, he calls a woman who he respects above anybody else — his mom.

Buddy Hield has been exposed to strong women for his entire life. Growing up in the Bahamanian town of Eight Mile Rock, Hield learned the value of hard work and the difference between right and wrong from his mother. Hield's mom raised the star shooting guard and his six siblings by herself from the time Hield was about 11 years old, and worked three jobs while remaining a major influence in her children's lives. Hield has sisters who he celebrates frequently on social media, expressing his pride in the strong women they have become, always with the upmost respect.

He's a favorite among reporters who tweet regularly about Hield's polite nature, and he is always ready to give a shoutout to his friends on the Oklahoma women's basketball team.

Yogi Ferrell has the kind of family that even television's savviest sit-com writers can't make up. His two little sisters have been trolling him with custom made tees with printed slogans like "Who is Yogi?" and "I can beat Yogi in 1 on 1." His mother, a doctor, had her own tee printed up that read "Yogi's sister? or Yogi's mom?" You can watch his speech from senior night below, in which he asks his girlfriend, an IU cheerleader, to join his family at center court, spends a lot of time thanking his sisters for their support over the years, and reminds Hoosiers fans to "listen to your mama!"

I chose Nolan Smith as the coach of the 2016 All-Feminist team, because you really can't write this piece without Smith making an appearance somewhere. I went to school with Nolan, and forget about basketball players or athletes, he is truly one of the best humans that I've ever interacted with. The way he treats all women, from his peers to his sister, his inimitable mother Monica Malone, and his new fiancé (congrats, y'all!!) is a real testament to the way he was raised. If you've never had the pleasure of meeting Nolan, go check out his Instagram and then tell me that's not a feminist.

The Sweet 16 kicks off soon, so make sure you tune in to cheer on the first annual All-Feminist squad!

More like this
Playing In Wimbledon Whites While On Your Period “Isn’t Easy," Says Alicia Barnett
By Rachel Mantock
5 Ways To Stand In Solidarity With Women In America From The UK
By Sophie McEvoy
How To Fight For Reproductive Rights, Based On How Much Time You Have
By Courtney Young
Why You're Seeing Green Bandanas At Abortion Rights Protests
By Lexi Inks
Get Even More From Bustle — Sign Up For The Newsletter