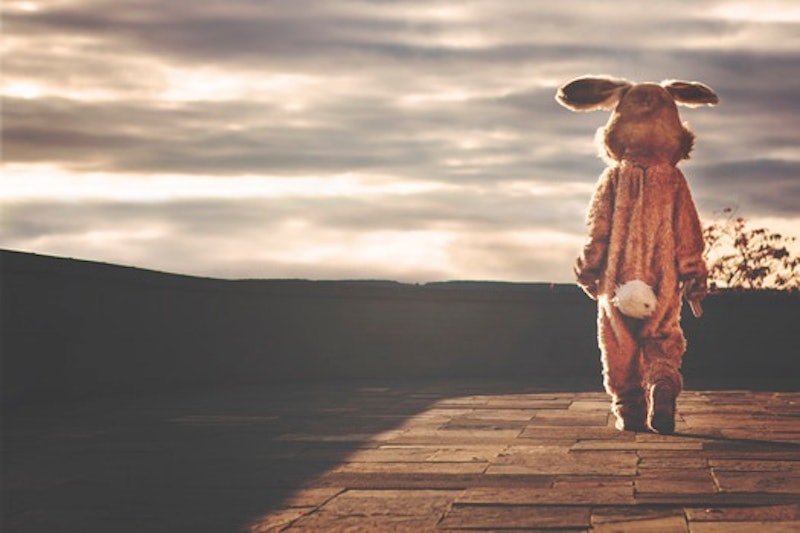 What are you doing for Easter? Eating some hot cross buns? Going to church? Taking several days off work to work your way through the colossal amount of Easter chocolate you've been stockpiling from the supermarket? Well, if you feel the need to fit in reading some feminist theory around your Easter holiday, it'll actually be quite fitting. Two aspects of Easter make it a seriously feminist holiday: the roots of its history in hugely influential cults celebrating pagan fertility goddesses, and a hilarious episode in 1920s New York involving cigarettes, the Easter Parade, feminist rhetoric, and the phrase "torches of freedom". (Look, nobody said feminist history was particularly smooth.)

The notion of a pagan goddess as somehow feminist might seem a bit odd to you, but look further. We're not talking about wishy-washy nymphs or some Greek goddesses bickering over an idiot's apple in a meadow; the goddesses associated with Easter were the big ones, and in charge of the land's fertility, which in primarily agricultural societies was the highest role you could get as a god. They weren't solely defined by fecundity and motherhood, either. One, as we'll see, was completely in charge of the natural world, including some docile lions, and commanded a raucous cult filled with rioting women; another doubled duty as the goddess of fertility and of warfare. These weren't docile female models. They were Big Damn Deals, and I quite like the idea of a holiday with its origins in the worship of Big Damn Deals possessed of breasts and attitude.

So when you're munching on your Easter chocolate, pay heed to the origins of Easter in other civilizations, and its occasionally bizarre ties to feminism in this one.

There Are Female Goddess Links To Easter

Long before there was Christianity and the narrative of Jesus rising from the dead, there were fertility ceremonies to mark the beginning of spring across many pagan civilizations. And Easter, it seems, comes from a long lineage of celebrations based around honoring awesome fertility goddesses.

There are several apparent sources for the idea of Easter as a festival of rebirth and renewal (eggs, chickens, lambs, and rabbits are all signs of agricultural spring in the Northern hemisphere), but we're not entirely clear on what influenced whom. Some scholars think modern Easter may have been influenced by the Cybele cult of ancient Rome. Cybele (above) was seen as "mother of the gods," a fertility and agricultural goddess responsible for curing disease, and was worshiped throughout the Roman Empire; she was often depicted being pulled by lions in a chariot, or with them sitting at her side. (Yeah, I'd worship that too.) Apparently a week-long festival in March or April called the Megalensia was held in Cybele's honor, and took over most of Rome; it was during the Megalensia that the first plays of Terence were performed, and the goddess was lavished with gifts as all-powerful.

There were other influences, too, but they may be a bit more suspect. Ēostre was supposed to be an ancient German goddess of spring, but the only evidence we have of this is a small reference in the writing of Venerable Bede, an English monk writing centuries later — and he only dedicates one haphazard paragraph to her. It's not actually known if worship of her really existed; Bede was just extrapolating based on the name of a lunar month for the Celts, Eosturmonath. There may have been no such goddess, though a celebration of her survives in modern paganism as the festival of Ostara, the spring equinox of the Northern hemisphere.

When it comes to fertility goddesses with ties to Easter's particular story, though, examples come from other cultures, too. One proposed theory (since debunked) was that Easter was influenced by an ancient Sumerian religious story about the death and resurrection (over three days) of the goddess Ishtar or Inanna (above), the goddess of fertility and war who pursues her husband into the underworld, leaving the earth to wither and rot. When they're both rescued, the earth flowers again and fertility is restored. If you've noted the parallel with the ancient Greek myth of Persephone, you're not alone; Inanna's return to the underworld every six months was blamed for the cycle of the seasons. Easter's not Ishtar's holiday, but it seems to be our culture's version of a very old theme.

Both Cybele and Inanna were hugely powerful goddesses in their respective pantheons. We know nothing whatever about Ēostre, and it's all a bit unclear as to how pagan myths may have fed into the records and ideals of Christian Easter: Scientific American lists a whole swathe of different myths about eggs from many different civilizations that indicate the idea of the egg as symbol of Earth's fertility is certainly not unique to Easter. But it's pretty amazing to think that the modern interpretation of Easter, with its symbols of new life and rebirth, could actually be linked back to the worship of female goddesses seen as hugely important in the workings of the universe.

Much Later, Easter Was Used To Market Cigarettes As Feminist "Torches Of Freedom"

There's another, hilarious tie to feminism in the history of Easter, and it goes in another direction entirely. In 1929, people watching the famous Easter Sunday Parade in New York would have been flabbergasted to see women taking part in the parade while openly smoking cigarettes and bearing the legend "Torches Of Freedom". Yep: the Easter celebration was part of a massive marketing campaign tying cigarette use by women to feminism and universal suffrage. You can't make this stuff up.

While we know it's not exactly a feminist act to smoke something that can kill you now, back then, it was a serious social taboo in the period before the 1920s for women to be seen smoking; it was masculine, peculiar, and, in the words of historians Amanda Amos and Margaretha Haglund, "associated with loose morals and dubious sexual behavior". Cigarette-smoking meant you were a good-time girl. The Easter stunt was part of a concerted marketing attempt by a canny PR executive named Edward Bernays, who decided to market cigarettes to women using the new rhetoric of women's freedom. They weren't just little puffs of smoke; they were "torches of freedom," and they represented breaking the boundaries of "proper" social behavior for women.

The campaign was supported by feminist activists, too: apparently Ruth Hale, a famous New York feminist who tried to get a passport issued in her maiden name and was the first married woman to own real estate in her own right, urged, “Women! Light another torch of freedom! Fight another sex taboo!” The completely cynical tactic worked, defiant cigarette use among women took off, and Easter became the flashpoint for smoking as a normal feminine activity.

So let's recap: Easter's been associated with rapturous celebrations of goddesses who could end the world, women throwing off the chains of a restrictive social taboo, and a marketing executive using the goals of feminism for his own commercial ends. That seems like a potted history of feminism to me. Happy Easter; go eat some eggs and worship the feminine.