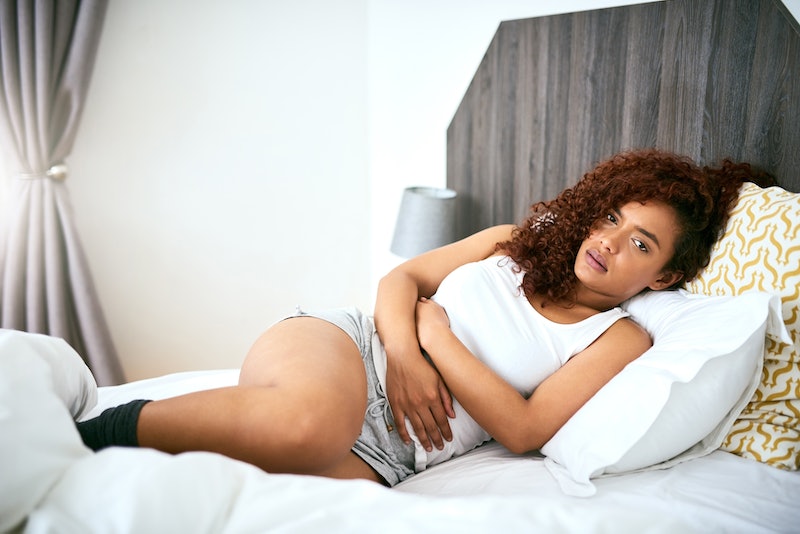 Some cramping during every period is normal (unfortunately) — but if every menstrual period sees you dealing with the kind of cramping that feels like you've been punched in the gut, you may have something you need to get checked out. In many cases, intense menstrual cramping is just a sign that you've been blessed with higher-than-usual levels of a substance called prostaglandin in your body (take a bow, prostaglandin, and prepare to be given the stink-eye by millions of women). In others, it's a signal of underlying medical conditions, a reaction to medication, or something related to the particular characteristics of your reproductive system —you might be dealing with a backward-tilting uterus, or a cervical canal far too thin and dainty to handle normal menstrual flow. Lucky you.

The good news is that you shouldn't panic; most menstrual cramping has a definitive cause and is unlikely to be a sign of infertility, major life-threatening health problems, or aliens colonizing your uterus. However, it's important to be aware of the possible health issues that extremely painful cramps might indicate, so that you don't miss obvious signals that something is amiss in your body. Education about your cramps won't make the little bastards go away — but it'll give you some understanding as you lie in the fetal position, cursing human reproduction.

Here are seven reasons you might have cramps. Have some chocolate and some ibuprofen to get you through it; it may feel as if you're dying, but I can reassure you that the odds are firmly on the side of life.

1. You Have High Prostaglandin Levels

This is by far the most common cause of menstrual cramps. It's called "primary dysmenorrhea," which essentially means menstrual pain that's a natural part of the cycle. (All the other causes on this list are classed as "secondary dysmenorrhea.") Prostaglandin is a hormone-like substance more commonly associated with giving birth; your body will sometimes give you a dose to help you with your contractions.

But having higher-than-typical levels of it in your blood all the time (not just when you're, you know, giving birth) might also be why you're prone to ferocious cramps. See, a "cramp" isn't just slang for period pains; it's what is actually happening inside your body when you feel period pain. The muscles of the uterus contract powerfully to expel the lining; if you have high natural levels of prostaglandin in your body, your uterus will contract more forcefully, leading to painful cramps.

Unfortunately, there isn't anything you can do to lower your body's levels of prostaglandin. But at least now you know what's going on.

2. You Have A Retroverted Uterus

This sounds bizarre, but it's actually far from uncommon: as many as a quarter of all women have a retroverted uterus. What is a retroverted uterus? In most women, the uterus tilts forwards, over the bladder; but a retroverted uterus instead tilts backwards, towards your butt. It's not actually all that problematic, and can occur naturally; sometimes the uterus just shifts position as we age or get pregnant, though it may end in that position because of scar tissue from a condition like endometriosis or uterine fibroids (we'll get to those conditions in a minute). Uterine retrodisplacement, as it's also known, can cause pretty bad menstrual cramps in some women, and there's a surgical procedure known as a "uterine suspension" that can fix the difficulty. But there's a limit to the problems that it can cause: a retroverted uterus is not regarded as much of a problem for fertility.

3. You Have Uterine Fibroids

Fibroids are small, non-cancerous growths that can develop on or in the walls of the uterus and cause inflammation, which leads to nasty cramping during periods (they may also be called "fibroid tumors" and "myomas"). But they're not actually a cause for massive panic; they're very common, and are thought to be linked to certain hormones, like estrogen; they're not a sign of having another illness. They do cause other menstrual conditions besides cramping, though — like bleeding so heavily that it causes anemia — so do consider getting yourself checked out if you identify several of the symptoms.

4. You Have Endometriosis Or Adenomyosis

Oh, endometriosis, you nasty little sucker. This chronic condition means that uterine tissue grows outside the uterus lining itself, on other organs; and when it comes time for your period, all of it sheds. There's a particular variant on it called adenomyosis where the uterine lining grows in the walls and on the outside of the uterus as well, and people with that disorder may suffer the same fate: really serious menstrual cramping. Not all women with either endometriosis or adenomyosis have the same symptoms, but extraordinary cramping and painful periods are regarded as standard warning signs for the disorders, so it could be worth getting checked out.

If you've had a copper intra-uterine device fitted for your contraception, more intense cramps are (alas) considered part of the territory in your next few menstrual cycles. It's considered completely normal for the first few menstrual periods after the insertion of a copper IUD to be heavier and cramp-ier than normal, as the uterus reacts to the new substance in it. It is, however, not considered normal for this to to continue. So if it's been going on for more than three months after insertion, call your doctor and see if the hormonal IUD might be a better idea, or if there's something more serious going on. (Hormonal IUDs might actually be linked with less cramping overall, interestingly enough.)

6. You Have Pelvic Inflammatory Disease

PID is actually more complicated than just "an infection of your reproductive organs," though that's technically what the term means. PID is commonly caused by undiagnosed STDs — typically gonorrhea and chlamydia — passing bacteria through the cervix into the fallopian tubes, uterus, ovaries and elsewhere. It sounds like a disease this serious should have extremely obvious symptoms, but PID often only produces mild discomfort including pelvic pain, painful urination, and menstrual cramping. The big sign of a PID infection is yellow or green vaginal discharge, so if that shows up or you feel concerned in any way, get to a doctor immediately; PID is linked to infertility and ectopic pregnancies.

7. The Opening Of Your Cervix Is Tiny

The technical term for this is uterine cervical stenosis, but what it means is that the canal through your cervix is teeny-tiny, smaller than a mouse's ballerina shoe (yes, that's totally the scientific measure). The reason this could cause problems for cramping is pretty obvious: the blood finds it desperately hard to pass through as it's shed from the lining of the uterus. Result? Lots of cramps, likely not very much blood. Uterine cervical stenosis is often the result of surgery or trauma to the cervix, rather than something that happens naturally, and it's not particularly fun, so if that sounds like you, get thee to a doctor.

More like this
10 Stranger Things-Inspired Halloween Costumes For True Fans
By Emma Carey
Bobby Berk Explains How To Maximize Every Inch Of Your Bedroom Storage
By Marilyn La Jeunesse
This Psychological Effect Might Be Keeping You From Hitting Your Goals
By Lexi Inks
The 5 Best SLS-Free Toothpastes, According To Dentists
By Amy Biggart and Danielle Calma
Get Even More From Bustle — Sign Up For The Newsletter