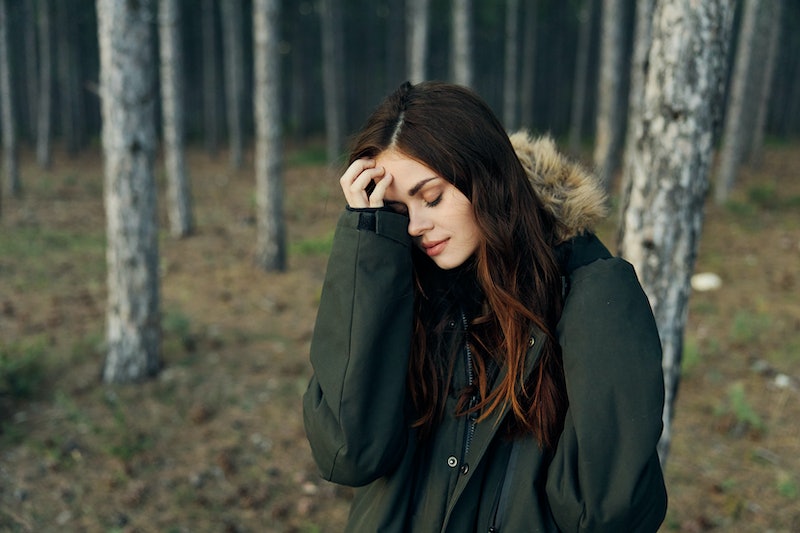 If you suspect a friend is suffering from an anxiety disorder and you want to help them, the first order of business is to talk to them about it — because you can't help your friend unless they agree that they want your help. But how can you tell if they're struggling with anxiety in the first place — especially if your friend isn't quite sure about it, either? Anxiety disorders, like many mood disorders, are unfortunately sometimes hard to spot, since they're not like visible diseases — the sufferers don't go around with red spots and a temperature. If you know what you're looking for, however, it becomes a little easier to see whether your friend is simply a bit high-strung, or if they are suffering from something more intense and disordered.

Anxiety disorder is an umbrella term: there are several kinds of anxiety disorders recognized by the professional psychological community. They range from generalized anxiety disorder, where sufferers feel anxious much of the time, to panic disorders, obsessive-compulsive disorder, and phobias regarding specific things. While you can't diagnose your friend with a specific anxiety disorder — or with anxiety disorder in general — you can tell them that you've noticed that they seem to be struggling lately, and urge them to look into getting help.

Here are nine signs that a friend or family member might have an anxiety disorder, but resist the urge to go all Sherlock Holmes on them if these symptoms do sound familiar. If you bring these symptoms up, use tact, be gentle, and let them know that above all else, you care about and support them.

1. Their Body Language Is Often Tense And Jittery

One of the biggest signs of anxiety is lingering muscle tension. Limbs and jaws that ache from constant clenching are a common complaint among people with anxiety disorder, though they may not even realize that they're doing it. The Anxiety Centre points out that this tension can affect all parts of the body, so if you notice your friend clenching their fist, tapping their feet, or generally being unable to keep still — while clearly in a state of high mental and physical agitation — on more than one occasion, count that as a sign of possible anxiety difficulties.

2. They Complain Of Chest Pains Or A Racing Heart

In some particular manifestations of anxiety, including panic attacks, the body goes into adrenalin overload, flooding with hormones to stimulate what's known as a "fight or flight" response. The fight or flight response — which Psychologist World explains is also known as the "acute stress response"— puts the body in a state of high alert, ready to face threats to its survival or flee blindly to preserve itself (even if the situation isn't life-threatening at all). One aspect of this response is a pounding heart rate as the body attempts to give as much oxygen to its limbs as possible.

If your friend complains of suddenly having their pulse race, especially at a time when they feel very anxious or tense, it could be a sign that they would benefit from professional help.

3. They Give Off The Sense Of Being "On Edge"

This is most relevant to people with generalized anxiety disorder. People with generalized anxiety disorder are in a constant state of preparation for threats and emergency panicked responses. Your friend may not tell you this directly, but they will likely give off subconscious and conscious signs that they're ready to jump at any moment. Whether it's pacing, speaking too fast, reacting sharply to exterior noises or stimuli, or being extremely restless, they're clearly primed for action, even if there's nothing to react to.

4. They Voice Fears That Seem Catastrophic Or Misplaced

The cycle of beliefs that drive anxiety can seem completely confusing to a mind that isn't caught in the same trap. Obsessive-compulsive disorder may be the most well-known manifestation of this drive, and, to those who do not suffer from it, the most confounding. The compulsive actions that those who suffer from this disorder feel compelled to engage in— from closing a door multiple times to washing hands — are, in the words of the mental health charity MIND, aimed at "dealing with the distress caused by the obsessive thoughts and relieve the anxiety you are feeling."

However, distressing, catastrophizing thoughts aren't only present in OCD; they are often present in other anxiety disorders, too. Anxious people may fixate the worst possible outcome for a situation (unlikely though it may be), and obsess over it, unable to convince themselves of its relative lack of possibility. This is called "catastrophizing," and it can be paralyzing. Anxieties come from a deep place, and they often can't be discussed or dismissed rationally.

The Psychiatric Times notes that anxiety disorders and insomnia as commonly part and parcel of the same experience: insomnia is actually one of the criteria that can be used to officially diagnose someone with an anxiety disorder, according to the Diagnostic Statistical Manual (DSM), a guide for mental health professionals. The reasoning is actually pretty obvious: If your friend is hyped up, alert and on the look-out for threats, or unable to stop the catastrophizing thoughts running around their brain, they're very unlikely to be able to relax easily and sleep.

We all get snappy occasionally, and obviously, there are a wide variety of reasons that a person might be consistently irritable (and also obviously, not all people with anxiety disorders are irritable). But since people dealing with untreated anxiety disorders are often experiencing poor sleep, nervousness and repeated floods of adrenalin, some irritability often follows.

There are other reasons a person dealing with anxiety might be easily upset, as well, too. The Calm Clinic, an advice website focused on anxiety disorders, explains that those who suffer from anxiety attacks may be especially irritable due to their struggle to deal with anxious thinking — this kind of hyper-vigilance may cause a short fuse when dealing with people in their space or taking up their attention.

7. They Need Things Done A Certain Way To Retain A Feeling Of Control

Though we may think of this behavior as primarily part of the compulsive elements of obsessive-compulsive disorder — behavior designed to address or somehow "confront" the catastrophic situation that an anxious person believes is likely to happen — it can be a part of the rest of the spectrum of anxiety, too. Heathline puts it well: "One way you may deal with feeling anxiety is to overcompensate by exerting great control over your current environment, including the people around you." Your anxious friend may try to feel like they are always in control and micro-manage — a behavior they engage in not because they're bossy, but because they feel that this is what they must do in order to avert disaster.

8. They Avoid Situations That Prompt Too Much Worry

The technical term for avoiding something because of its potential to trigger anxiety is "avoidance coping," and Psychology Today refers to it as "the most important factor in anxiety." This tendency is an extension of the anxious person trying to hyper-control their environment, except that the control manifests as avoiding any situation that is perceived to be a potential powder keg. This tendency might be fairly difficult to spot in friends; it's easier if their particular anxiety is social anxiety disorder, in which case their avoidance will be centered around social situations. But if it's other things that make them uncontrollably anxious, or just life in general, you may have to look harder to see what they're leaving out of their lives: certain situations, people, activities or things that they feel cause serious worry, and avoid.

9. They Can't Be "Talked Down" Easily

If somebody who doesn't have an anxiety disorder is worried, you can usually discuss their concerns with them rationally and examine their feelings in a logical way. People with anxiety disorders do not have the kind of worries that respond to this kind of treatment; there's very little that you, as a friends, can do to get them "out" of a spiral of anxious thinking or panic attack. That's because anxiety-based worries are not rational, and therefore can't be rationalized. Serious treatment of anxiety requires therapy, which may leave you, as a friend or family member, feeling a bit useless or unable to help; but you can help in many other ways, from supporting your friend physically during bad episodes to helping them challenge certain parts of their fears on their own.