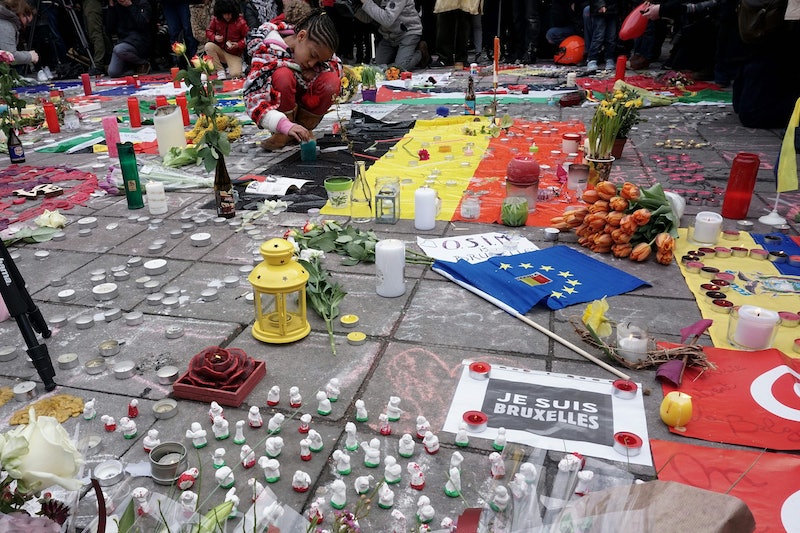 Tuesday's devastating terrorist attacks in Brussels have been linked to the November Paris attacks, as CNBC reports that two of the suspects rented Paris suspect Salah Abdeslam's safe house. Brothers Khalid and Brahim El Bakraoui, who officials believe were killed in the suicide bombings, reportedly paid for the apartment Abdeslam hid out in while the police carried out a major manhunt for the terrorism suspect. Abdeslam was arrested in Brussels Friday, days before the brothers and at least two others carried out three attacks in the Belgian capital that killed at least 31 people and injured more than 200.

All that's known is that the El Bakraoui brothers rented the apartment, so it's unclear whether they stayed there themselves or simply procured it for Abdeslam while he was on the run. Either way, the news is the first clear link between the Brussels and Paris attacks that happened months apart. CBS News reports that Khalid used fake identification papers to rent the apartment in Forest, a local Brussels municipality, that police raided last week in search of Abdeslam.

Brahim was identified as one of three men involved with the two bombings at the Brussels airport Tuesday, and Khalid is believed to have been a part of the attack in a major subway station the same day. They were both previously known to Belgian law enforcement for their links to violent crimes, but were not suspected terrorists.

The Guardian reports that one of the brothers also rented a house in Charleroi, about an hour south of Brussels, where two men behind the Paris attacks met before traveling to France for the terrorist plot. One brother is also suspected of giving weapons and ammunition to perpetrators of the Paris assaults, but it's unclear whether it was Brahim or Khalid.

Another suspect in the airport attacks, identified as Najim Laachraoui, is also believed to be tied to the Paris attacks, as officials suspect he made the bombs used in Belgium and France. Formerly known by an alias, Soufiane Kayal, he was seen with Abdeslam in September when they were stopped at the Hungary-Austria border. Laachraoui was seen in security footage from the airport with Brahim and one other unidentified man, and the 24-year-old Belgian national is still at large. Officials made an arrest Wednesday, originally reported to be Laachraoui, but Belgian Federal Prosecutor Frederic Van Leeuw confirmed in a news conference later that day that the suspect was not in custody.

ISIS claimed responsibility for both terrorist plots, and it's now clear that the actors were closely intertwined. Aside from the militant group's larger goal of inciting a religious war between Muslims and Christians in Europe and seeking revenge for airstrikes on their core territories, it's possible that Abdeslam's arrest sped up plans for an attack in Brussels, though the suspects' motives are not yet known.