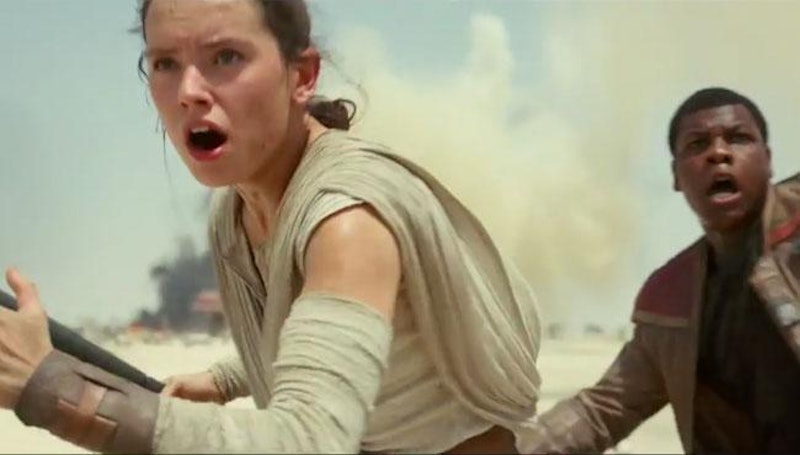 Maybe by now you've had your fill of Force Awakens, but chances are that any hardcore Star Wars fan is craving any morsel of news between movies. As it is, we still have a bit of time until the April Force Awakens DVD and Blu-ray release, at least a week until we can sink our teeth into all the delightful bonus features. Except, JK, Entertainment Weekly has you covered with a sneak peak of Force Awakens deleted scenes, including pictures and descriptions. And, while we don't always get satisfying conclusions, we could get an inkling of why these scenes ended up on the cutting room floor.

One of the first deleted scenes features Finn (before he was formerly christened with the name), emotionally torn during his big first stormtrooper outing. He's already been smeared with blood and comes upon a woman ripe for the killing. Does he follow orders and do it? We're not yet certain, but I'm gonna go with hard nah" here. If he does go for the kill, it would add a darker element to Finn's character (and his guilt) and if not... well, it just doesn't really add anything to the story, now does it?

Likewise, there are deleted scenes that just barely add to things we're already familiar with. There's a bonus deleted scene (that'll only be available digitally) that features Han Solo and friends confronted by a bevy of stormtroopers in Maz Kanata's basement. It's Han's job to talk his way out of it, and, while you guys know I'm a fan of Bae Solo and his ability to snark himself out of danger, we've seen this scene before, in this movie and otherwise.

Then there seems to be a snow-heavy scene that features Kylo staring down the Millennium Falcon, which alerts him that Han and Co. are conspiring against him, but also stirs up some feels (he probably has some fond childhood memories that took place aboard that ship). It sounds fine, but, again, we know Kylo is struggling with the light and dark within him, so the scene doesn't read as "necessary." There's another scene that features a chase between Finn, Rey, and some First Order Snowspeeders. It's clear that the Team Resistance ends up OK, and that a lot of fake snow was wasted on the previous two cutting-room-floor pieces.

So what else is there? The cool thing is that we'll get to see a bit more of characters that we definitely didn't get enough of, even if the context continues to add little. HBIC General Leia gets a spotlight in a scene that would have pushed her appearance earlier in the film, as she weighs in on the massacre on Jakku. And Poe Dameron, hotshot pilot slash delicious piece of eye candy in a post-Solo world, gets a little showcase scene as he leads a squadron of Resistance fighters in an attack against the Starkiller base. Nice.

As of right now, there's nothing universe shattering as far as deleted scenes go, but I'm sure this should keep you properly satiated until Force Awakens hits shelves.