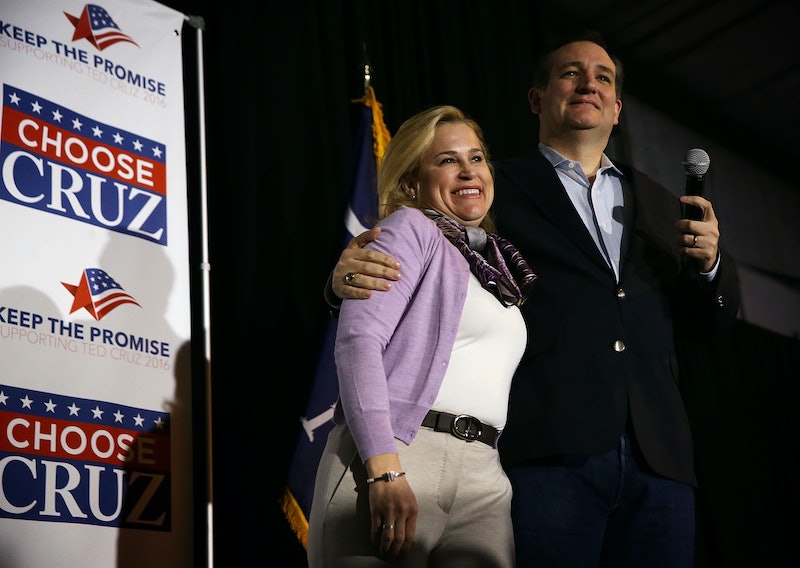 Tuesday was a very chaotic day internationally, with the attacks in the Belgian city of Brussels dominating much of the media's attention, combined with a trio of American presidential contests in Utah, Idaho, and Arizona. But there was one event related to the GOP primary race that went slightly under the radar, even though it speaks to just how sleazy and out-of-bounds the race already is, and how bad it's going to get going forward. What does Donald Trump think he knows about Heidi Cruz?

If it's unclear what exactly I mean by that, then you definitely didn't hear about Trump's latest outrage, by way of his Twitter account. After a Facebook ad (produced by an anti-Trump Super PAC not known to be specifically associated with Ted Cruz's campaign) made use of nude photos from Melania Trump's 2000 shoot for GQ, The Donald was clearly incensed.

But while a more routine politician would and could have turned the incident in their favor with a dose of firm maturity and righteous outrage ― the targeting and smearing of candidates' spouses or families is time-worn tradition in politics, and an ugly one at that ― that's not what Trump did. Instead, he sent Cruz a threatening tweet, implying that Cruz was behind the ad and threatening to "spill the beans on [Cruz's] wife."

The tweet was quickly deleted, but the Internet never forgets. So what on earth is Trump getting at with this? It's entirely unclear and incredibly tawdry, in any case. Beyond the fact that Heidi has been openly supportive of her husband's candidacy and that it's kind of unavoidable, she's done nothing whatsoever to earn this kind of underhanded insinuation. Nor did Melania deserve to be shamed for her modeling career, for that matter, but as plenty of children learn early on (perhaps not these two), two wrongs don't make a right.

As for what Trump is actually getting at with his gross threat, it's hard to know. The belligerent billionaire has routinely attacked his Republican rivals for virtually everything under the sun, from their policies to their looks to schoolyard taunting ― right down, in fact, to bragging about his penis size during a nationally televised debate. The sober-minded attacks seem few and far between.

It is true that Heidi is a high-level investment manager with Goldman Sachs, but somebody's publicly-known career in the financial sector isn't exactly the sort of thing you "spill the beans" about, much less when you're a controversial mogul with plenty of skeletons in your own closet.

Some observers on social media have been drawing one particular conclusion, however. Heidi Cruz suffered from depression in 2005, a fact which is no secret ― it's included in an exhaustive profile of her written by BuzzFeed's McKay Coppins just over a year ago. It's completely out in the open already, and has been addressed by the family through the campaign. Heidi Cruz addressed Trump's threatening tweet in a brief press conference on Wednesday morning:

Well, as you probably know by now, most of the things, many of the things that others say, are not based in reality. I have one job on this campaign, and that is to be helping Ted win this race. And it is the easiest job in the world, because all I have to do is tell the world about my husband, my family and myself.

Even if Heidi's mental health history weren't already public knowledge, it really can't be overstated how disgusting this kind of an attack would be, if indeed that's what's going on here. Mental health issues are extremely common, but can also be extremely sensitive, thanks to the pervasive stigmatization people still face. Trying to trash somebody on that front is just about as low as it gets. It's impossible to know for certain whether that's what Trump was threatening, but at the very least, it's a real shame that some of his supporters seem to think it's fair game.