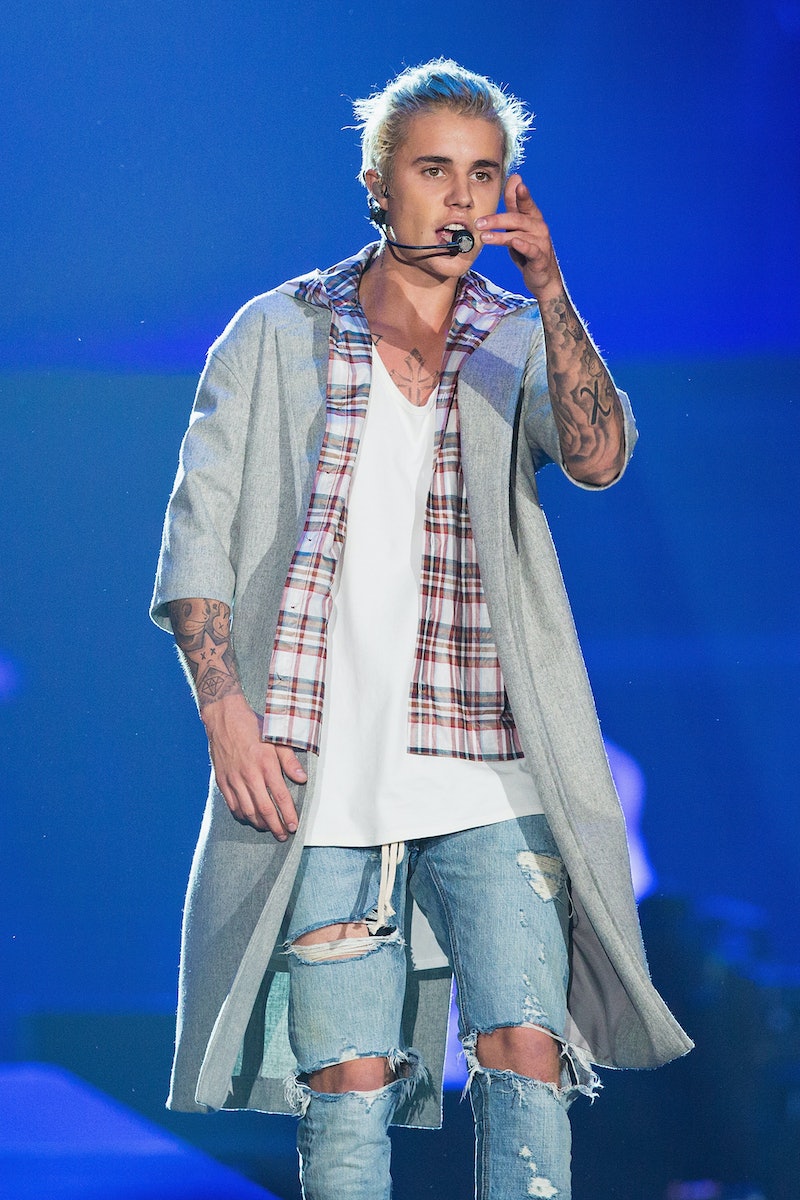 There's no doubt that there are thousands of Justin Bieber fans left devastated (and $2,000 in the hole) now that Bieber has abruptly canceled the meet-and-greets on his Purpose tour. But the overwhelming fan response has not been one of anger or malice. Instead, Beliebers are putting their crushing disappointment aside to support Bieber, trending "#WeAreHereForJustin" on Twitter and reminding everyone just how important it is to put your own mental health before anything else.

In an honest, yet oddly phrased, Instagram caption, Bieber announced that he was canceling all M&Gs because he leaves interactions with fans feeling "mentally and emotionally exhausted to the point of depression."

Sharing a picture of himself with a fan, Bieber wrote:

Love u guys.. I'm going to be canceling my meet and greets. I enjoy meeting such incredible people but I end up feeling so drained and filled with so much of other people's spiritual energy that I end up so drained and unhappy.. Want to make people smile and happy but not at my expense and I always leave feeling mentally and emotionally exhausted to the point of depression .. The pressure of meeting people's expectations of what I'm supposed to be is so much for me to handle and a lot on my shoulders. Never want to disappoint but I feel I would rather give you guys the show and my albums as promised. Can't tell you how sorry I am, and wish it wasn't so hard on me.. And I want to stay in the healthy mindset I'm in to give you the best show you have ever seen.

Bieber's candid explanation is an eye-opening look at the unique anxieties that come with fame — like how it is impossible to live up to the flawless, mythical being your fans perceive you to be — but it's also a crucial reminder that no matter what the situation is, there is nothing that is more important than self-care. When the 22-year-old says "not at my expense," he's right. It doesn't mean fans aren't allowed to be upset (I would have to be consoled AF personally), but that the singer is aware that such intense human interaction isn't the best thing for him right now, and he's putting his well-being first. And this shouldn't just be unique to Justin Bieber or celebrities in general — everyone should be making their health their top priority, even if it means disappointing people.

Fans have clearly understood this, taking to Twitter in droves to support the Biebs and sharing messages about how his health comes first and they hope he gets well soon:

It's important to note that this is not the first time that Bieber has been upfront about mental health issues. In fact, he has been open about his anxiety in the past. Hopefully, the cancelation of the M&Gs will allow him time to focus on himself and get into the best shape he can be, mentally, for the duration of the world tour.

More like this
Justin & Hailey Bieber's Bond Is "Unbreakable" Amid His Ramsay Hunt Diagnosis
By Bustle Editors
Will Beyoncé Be At The BET Awards To Perform “Break My Soul” Or Attend The Show?
By Jake Viswanath
Twitter Has *A Lot* To Say About Justin Timberlake’s Beat Ya Feet Dance
By Sam Ramsden
Selena Gomez Is Fine Being Single, But She Still Manifested Romance On 'SNL'
By Martha Sorren, Jake Viswanath and Jack Irvin
Get Even More From Bustle — Sign Up For The Newsletter