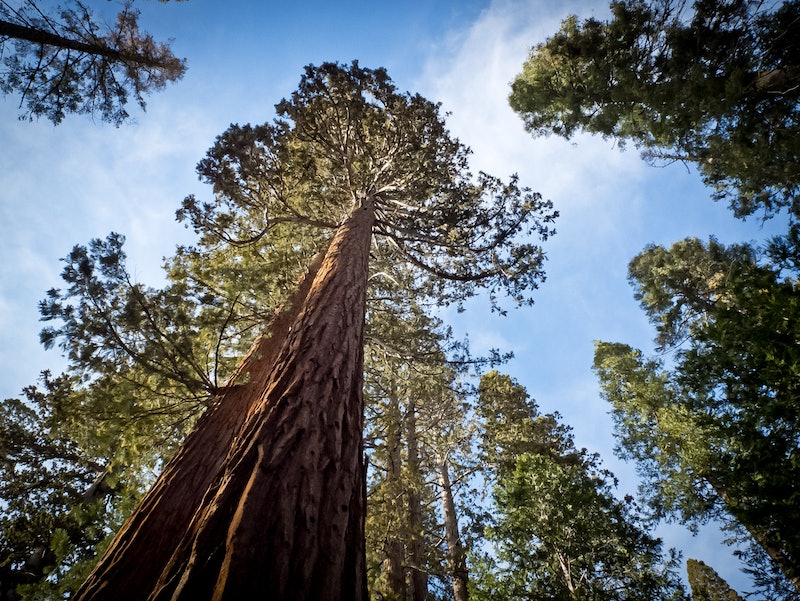 Outside a Macy's in downtown Seattle, a man has been perched in a tree for more than 20 hours, refusing to come down despite police pleas. The unidentified man climbed the 80-foot sequoia on Tuesday, and doesn't seem to plan on coming down any time soon. Catching the city and nation's attentions in large part because of a live video of the scene by KOMO News, the young man has baffled authorities with his stamina and lack of apparent motive.

Photos of the bearded man show that he built a nest out of the tree's top branches, allowing him to lay down more comfortably (as comfortable as one can be in a tree). The Boston Globe reports that the tree climber threw fruit and pine cones at police officers and medical responders on the ground trying to coax him down.

"We're in a holding pattern," Seattle Police Lieutenant David Drain told The Seattle Times' Evan Bush. "We want to maintain his safety." The city of Seattle's website says that police negotiators have spent hours atop a fire department ladder attempting to convince the mysterious man to climb down, adding that the police involved themselves because they worried he "posed a danger to himself, pedestrians, and motorists." Surrounding streets were closed Wednesday morning, and trains were rerouted to avoid the incident.

The anonymous man doesn't seem to be in the tree as a form of protest, considering he hasn't made any demands or done anything other than express his wish to be left alone. Rather, the extended stay in the tree appears to be for personal reasons, and the police backed up this theory in a tweet, saying the "issue appears to be between the man and the tree."

The bearded man reportedly climbed down to the bottom of the tree around 9 p.m. local time Tuesday night, leading onlookers to think the standoff was ending, but he quickly went right back to the top. Clearly not amused by the attention he's receiving, The Seattle Times reports that he yelled to police Wednesday morning: "How much taxpayer money are you wasting? It's not an emergency!"

Although a full day is a long time to spend in a tree, the unidentified climber hasn't even come close to the world record for tree sitting — that belongs to environmental activist Miranda Gibson, who lived 200 feet up in an old-growth tree in Australia for 209 days in 2012. Hopefully, this man doesn't attempt to break her record in downtown Seattle.

More like this
The Most Powerful Photos From The Weekend’s Abortion Rights Protests
By Melanie Mignucci
'Line Of Duty's Writer Just Dropped A Bombshell About Steve & Kate
By Catharina Cheung
Every Single Big & Small Way You Can Fight For Abortion Rights
By Tess Garcia
For These Abortion Clinic Volunteers, Going TikTok Viral Is A Risk Worth Taking
By Audra Heinrichs
Get Even More From Bustle — Sign Up For The Newsletter