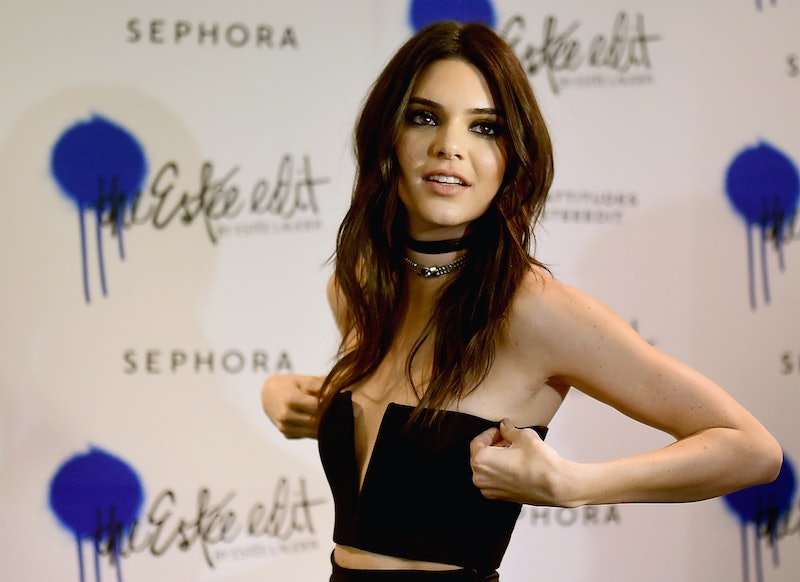 With just two years of modeling under her belt, this 20-year-old has accomplished many things, but her most recent magazine cover might just be the coolest yet. Proving that she is fabulous enough to fill every page, Kendall Jenner landed an American Vogue cover as part of a special edition of the magazine featuring, well, only her, in edition to the main April 2016 cover which features Rihanna. So, just how many Vogue covers does Jenner have? The answer might surprise you.

Starring in her very own special edition mini-issue of Vogue, Jenner not only steals the spotlight on the cover, but on every single page of the magazine. If you're wondering why Jenner was chosen, just consider how much she's accomplished since she stepped out onto her very first runway just two years ago. The it-girl has landed five Vogue covers in total, mostly for international editions of the glossy, walked in over 50 runway shows, and created two fashion brands all in just two years. How she even found time to sleep, I have no idea.

Simply put, the world seems to love Jenner, so it only makes sense that Vogue would honor her in a special edition of the magazine. She seems so humbled by it too. Jenner posted an Instagram with a caption reading, "Y'all I could cry! my very own Vogue Magazine. THE WHOLE THING. JUST ME. WHAT!! so honored to be the special edition issue @voguemagazine thank you!" Jenner also took to Twitter and expressed how she was feeling in just two words.

The model posted a video of her paging through the Jenner-ified Vogue to her Instagram account, and I have to admit that it's pretty awesome. From the back page all the way to the cover, Jenner shows exactly why she deserves her own magazine. Even the ads are starring her!

While this might be the most fabulous Vogue that Jenner has ever covered, it's definitely not her first. In just two years, the 20-year-old has graced the face of not only American Vogue, but international covers as well. Considering some people wait their entire lives just to get one cover, this is pretty incredible.

For Vogue Paris's 95th anniversary issue, they picked four It-girls to grace their own covers. Jenner was one of them along with Gisele Bündchen, Christy Turlington, and Kate Moss.

Jenner landed this international cover back in November 2015 with just one year of modeling under her fashionable belt.

The model started out 2016 with a whole bunch of new jobs, and this Vogue Brazil cover was one of them.

Out of all of her Vogue covers, this is definitely the boldest of them all.

Her fifth cover is the most fabulous of all.

I can't wait to see what she's up to next.

More like this
23 Times Meghan Markle Dressed Just Like Princess Diana
By Bustle UK
I Have Eyebrow Alopecia – & Microblading Gave Me My Confidence Back
By Jessica Morgan
Bustle Newsletter: June 30, 2022
By Stephanie Talmadge
Olivia Munn Got Real About How Her Body Hasn’t “Snapped Back” Post-Pregnancy
By Stephanie Topacio Long
Get Even More From Bustle — Sign Up For The Newsletter