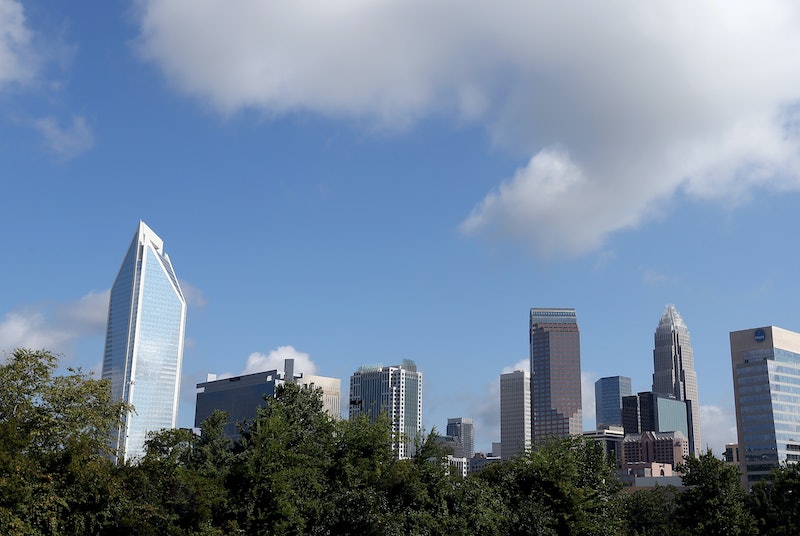 The North Carolina legislature passed a bill Wednesday that makes prohibiting discrimination illegal. The law makes it illegal in North Carolina to protect LGBT residents from discrimination at the county or city level — in response to a pro-LGBT measure that Charlotte, the biggest city in the state, enacted last month. What's worse is that it snuck in an anti-trans bathroom measure, much like the South Dakota bill that was vetoed by the state's governor in March. It prohibits transgender individuals from using a bathroom that doesn't correspond with the sex dictated by their birth certificate.

The city ordinance in Charlotte would have protected employees from being fired and also applied to customers in public accommodation like hotels, restaurants, and taxis. What the Republican-controlled state House and Senate most publicly took issue with with was a section allowing transgender individuals to use the restroom in line with their gender identity — which, instead of protecting, is now illegal, thanks to the new measure.

The bill was quickly signed into law by Gov. Pat McCrory, also a Republican and the former 14-year mayor of Charlotte. He said the bill was "passed by a bipartisan majority to stop this breach of basic privacy and etiquette."

What he did not mention that all of the state Senate Democrats left the floor in protest of the measure during the debate. Republicans voted unanimously for its approval. Previously in the House, 12 Democrats did vote with their Republican colleagues for the measure. The final vote tally there was 86 to 26.

Of course, LGBT rights organizations were quick to condemn the measure — one that goes against a recent tide of victories, including the veto of a law in South Dakota. Human Rights Campaign President Chad Griffin said in a statement:

McCrory’s reckless decision to sign this appalling legislation into law is a direct attack on the rights, well-being and dignity of hundreds of thousands of LGBT North Carolinians and visitors to the state.

Mara Keisling, the executive director of the National Center for Transgender Equality, focused on the bill's troublesome effect on the trans residents in the state, saying in a statement:

Governor McCrory clearly had no interest in knowing transgender North Carolinians or even learning about the Charlotte ordinance he's pretending to be outraged about. This is another blemish on North Carolina's reputation. He isn't acting in the best interest of all North Carolinians.

The legislature ignored the testimony of one transgender North Carolinian while the bill was up for debate. Skye Thompson, 15, of Greenville, N.C., who identifies as male addressed the chamber. He told the senators that they were putting him in danger.

"I’ve dealt with bullying my whole life and now I worry that my own state lawmakers are bullying me as well. I feel bullied by you guys,” Thompson said.

The Charlotte ordinance was never able to take effect. It was set to begin on April 1, but the GOP leaders spent $42,000 to call a special session to prevent that. The legislature was not scheduled to be back in session until late April.