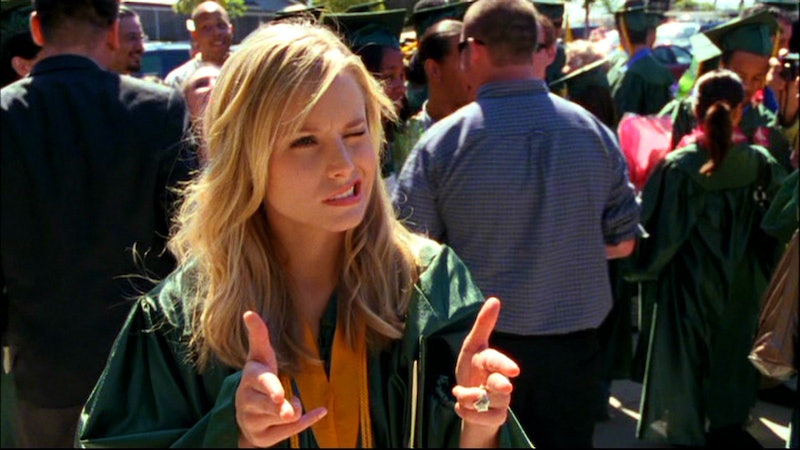 It's time to crack open the books, or get on that project at work, and head into summer strong. Whether that means acing your finals at school, starting that new project you keep putting off, or just getting back on track at your job, the time is now. Even though it can be hard to buckle down and get things done, sometimes entertainment can be used as an encouragement instead of a distraction. And one of the best encouragements on television is Veronica Mars. That may seem strange considering her character isn't filled with warm and fuzzies all the time, but, when it comes to someone who can help you hit the books, Veronica Mars quotes will motivate you to get work done.

Female teenage detectives will forever be the best set of characters in entertainment. There is something about a young woman on a mission to fight crime by exposing injustices that is just so appealing. That same appeal of a woman who won't stop until she gets to the bottom of a mystery is the most motivational force when it comes to saying "no" to procrastination. Who couldn't use a few productivity tips from someone who has enough discipline to get up at five in the morning to research a case, and still make it to school in time for homeroom? You know it's true, and no one knows how to balance a schedule better than teenage sleuth Veronica Mars.

1. "It's All Fun And Games Till One Of You Gets My Foot Up Your Ass." -Veronica

Because sometimes you just need to be told to stop messing around and start getting stuff done.

2. "I Hope We're Still Friends After I Taser You." -Veronica

How you should approach every big test or deadline from here on out.

Basically. Go open those books or that status report, or whatever it that you're working on, and start getting even.

4. "If There's A Justification For My Actions Right Now, It's This: I Have Gone Completely Mad." -Veronica

At some point, you're going to go a little stir crazy with all the work you have to get done. Just accept it and move on.

It may get tough, but keep fighting the good fight. You can do it.

6. "I Convinced Myself Winning Meant Getting Out. But In What World Do You Get To Leave The Ring And Declare Victory." -Veronica

At some point, you just have to push through the pain.

7. "After All These Years, Do You Not Instinctively Fear Me?" -Veronica

Your work fears you, not the other way around.

8. "And I'll Be Sittin' Over Here, Chillin' Like A Villain." -Veronica

Sometimes you need to unwind and not get so stressed out over the task at hand. Take a quick break, and then get right back to the grind.

9. "You Don't Care Now, But Holy Crap Are You Gonna Care When I Start To Get My Revenge On. You'll Be Doing All Sorts Of Carin'." -Veronica

Success is the best form of revenge, right?

You need to remember that, just because you feel like school or work has sucked all the energy out of you and you can't continue, doesn't mean you can't do the same to it. Work so hard that work needs to take a break from you.

11. "Tragedy Blows Through Your Life Like A Tornado, Uprooting Everything. Creating Chaos. You Wait For The Dust To Settle And Then You Choose. You Can Live In The Wreckage And Pretend It's Still The Mansion You Remember. Or You Can Crawl From The Rubble And Slowly Rebuild." -Veronica

Even when you fail, it's always good to remind yourself that the dream isn't over. Sometimes you need to hit the books and give it another shot.

Wise words from Veronica's best friend, Wallace. Tell that deadline not to mess with you, and then kick its butt.

13. "I Think We Have A Choice. I Think We Could Take A Tough, But Survivable Amount Of Pain Now, Or Stay Together And Deal With Unbearable Pain Later. So I Vote For The Pain Now." -Logan

Logan Echolls, Veronica's on-again-off-again boyfriend/OTP (sorry not sorry), said this, and while he was talking about their relationship, I think it can apply to ending that procrastination streak of yours as well. Either get it done now and thank yourself later, or put it off and dread it even more. It will always be worth it in the end to do it sooner rather than later.

There you have it, straight from the queen herself. When you get discouraged, just think to yourself, "What would Veronica do?" Then go out there and make it happen.

More like this
Yes, Joseph Quinn Is Actually Playing The Guitar In This Epic 'Stranger Things' Scene
By Alyssa Lapid
Florence Pugh & Zoe Kazan Have Teamed Up For A Major New Netflix Series
By Rachel Mantock
'The Summer I Turned Pretty' Book Ending Is An Emotional Rollercoaster
By K.W. Colyard
Jurnee Smollett’s Heart Is Healing
By Rebecca Carroll
Get Even More From Bustle — Sign Up For The Newsletter