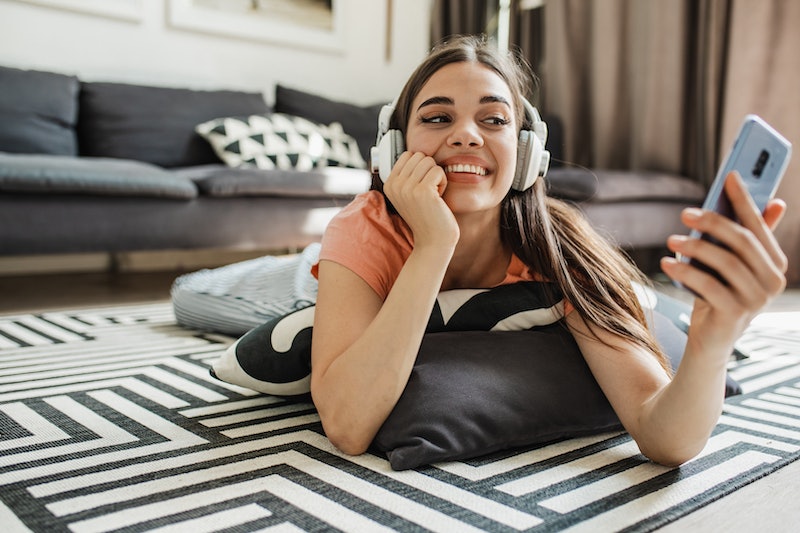 Sometimes drama pops up more than you would like. It might be because your longtime friend is mad at you again or your coworker is causing some trouble. Either way, it might be time to figure out how to let go out of the drama, because there's no reason you should have to deal with the constant stress of trying to diffuse a difficult situation or argument. Saying goodbye to drama once and for all may be hard. It might mean you have to end a friendship or stop yourself from gossiping, but eliminating these negative aspects might be your only option for moving forward with your life — unless you can prevent the drama from happening in the first place.

Eliminating drama also may mean you have to change some aspects of your own personality and habits. According to Forbes, the way you assume someone else's intentions may indicate the type of reaction you may give to the person. For example, if your partner forgot to give you a kiss in the morning, you could assume the worst by thinking: "He/she doesn't love me anymore." Or you could react positively by realizing that your partner is probably tired or feeling rushed. From those two scenarios, you can probably guess which one may create the most drama. If you're the type of person who always goes with the former response of the two options above, then this article is perfect for you. Here are some tips that may help you begin a fresh slate you've been looking for and hopefully, guide you to a more positive, drama-free life.

It can be tough to let go of any type of relationship. But no matter how long you've known a person, if they're not bringing any type of positivity into your life, you should try to let them go. How do you know if you should end a relationship? First thing's first: Listen to your gut. According to LIVESTRONG, friendship expert Dana Kerford said, “You don’t have to be able to explain why, and you don’t have to be able to articulate it: Feeling bad is reason enough. Trust that feeling.”

Sometimes the biggest arguments are the ones that you've inadvertently created yourself. Making assumptions is a quick-fire way to start some drama, and it may happen often without you even realizing it. Instead of assuming the worse from what someone has said, try to focus on the positive.

According to Cognitive Behavioral Therapist Chamin Ajjan, MS, LCSW, ACT, in an email to Bustle, "We have a tendency to focus on negative thoughts because our minds have a built-in negativity bias. These thoughts may or may not be true but we often accept them as truths without evaluating them. Personalization and jumping to conclusion are two types of cognitive distortions, or thinking errors, that cause us distress and increase drama in our lives. Learning to identify, challenge and modify thoughts can steer you towards a drama-free path."

3. Deal With The Drama — Don't Just Talk About It

Instead of beating around the bush and gossiping about your problems to other people, deal with the issue upfront. Learn to speak honestly with the individual who may be gossiping about you. When you're direct about your concerns and issues, you may eliminate the drama right then and there. According to The Huffington Post, psychotherapist Joyce Marter said, "Being direct and assertive involves being honest and genuine while remaining appropriate, diplomatic and respectful of yourself and others. It is not passive (being a doormat or a wimp), passive-aggressive (indirect communication, like not returning calls or emails hoping somebody gets the hint) or aggressive (being hostile and rude.)"

If something bothers you, and you want to talk about it, make sure you're sharing your emotions with the person who hurt you. It's best to just deal with the issue right away before it boils over.

What comes around, goes around, right? If you're like me, you may believe that your life could possibly be dependent on what type of energy you put out into the world. Negative situations may surround you if you're always complaining or picking fights with others. Try changing your perspective and catch yourself when you feel like you're going down the negative route.

According to Psychology Today, clinical psychologist Susan Heitler, Ph.D, said, "Spreading negative energy in relationships invites depression in those with whom you interact, triggers annoyance at you and increases the odds that people will want to keep distance from you. Positive energy in your interactions makes you safe and appealing to be with." Instead of bringing people down, try to always be aware of how you're projecting your energy onto others. This may allow you to have happier relationships less drama.

5. Give Other's The Benefit Of The Doubt

Even if something negative happened to you, this doesn't necessarily mean anything was your fault. When an ugly situation arises involving another person hurting you, try to give that person the benefit of the doubt.

According to The Huffington Post, humor writer and public speaker Vikki Claflin said, "Maybe the woman who just snapped at you in the grocery line, or the waiter who just rolled his eyes when you asked for more bread, just discovered that their spouse cleaned out the marital checking account and ran off to Bora Bora with the 19-year-old Swedish nanny. If you can’t think of what you did, you probably didn’t do anything, and it’s not about you. Let it go."

Let's keep it simple: If you don't want drama in your life anymore, try not to gossip. By engaging in the scandal, you're allowing yourself to participate in an act that's most likely not healthy for anyone involved.

According to Psychology Today, founder of Lead from Within Lolly Daskal said, "The way we talk about others can have a tremendous moral force—not only on our character and development but within the society around us." While gossiping may bring people together to discuss a common subject, it's usually at the expense of others. You'll probably have less drama in your life if you treat people the way you want to be treated.

Sometimes drama blooms when it's watered by your own insecurities. If you feel like you're being attacked or judge by others, it's easy to feel like drama is always going to be in your life. But the truth is that people say or do certain things because that's just who they are, and usually not because of anything you did or didn't do.

According to The Huffington Post, Carol Morgan, Ph.D., said, "The fact is, most people act the way they do no matter who they are with. If someone is a jerk, then they will be a jerk whether they are talking to a homeless person or the president of the United States. If someone is a good person, then they will be a kind to everyone — even if they don’t like a person." Once you realize that someone's actions and words have more to do with themselves than with you, you'll probably feel less likely to engage in that sort of drama because you can actually understand why it happens.

No one wants constant drama in their life, no matter how much they like attention or excitement. If you find yourself dealing with a lot of unnecessary conflict and arguments lately, it might be time to take a step back. Figure out where the issues are coming from and make some adjustments, and hopefully after using a few of these tricks, you may be able to alter your life into a positive light.