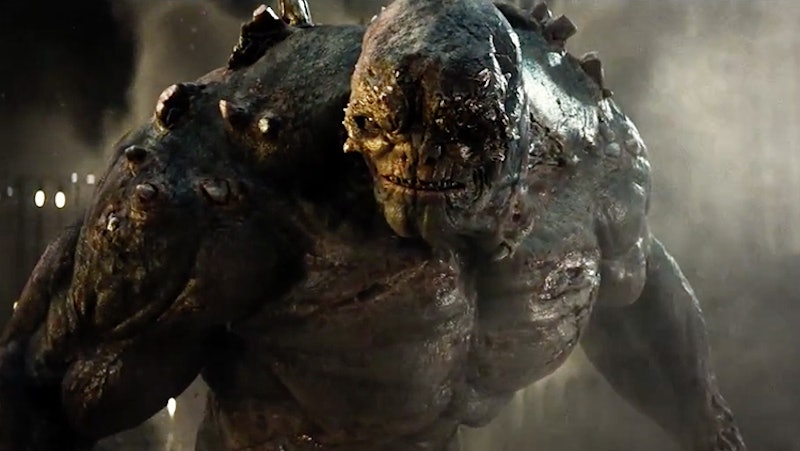 Every good superhero movie needs a good bad guy. The Avengers had Loki, Spider-Man 2 had Doctor Octopus, but who's the real villain in Batman v Superman: Dawn of Justice ? You're probably thinking it's obviously Lex Luthor, the maniacal rich villain known in the comic book world for his bald head and unrelenting hatred of Superman. Yet while you're right, there's also another major character fighting against Superman in BvS: Doomsday. But just who is Doomsday? Well, in the comics he's a massive villain who first appeared in the 1992 comic Superman #75, more commonly known as "The Death of Superman," in which he, well, killed Superman.

Since his first appearance, Doomsday has popped up every now and again to go up against Superman, in both comics and television series. Though his look and his origin story have changed over the years, the basics remain the same. Doomsday was created through cruel scientific experiments. In some stories, Doomsday is Kryptonian, like Clark Kent, and was experimented on by Bertron, a crazy scientist, as a baby in ancient Krypton. In others, Doomsday begins as a human experimented on with Kryptonian DNA. No matter how he is made, the result is always a massive, immortal opponent, more than capable of bringing down the Man of Steel.

The next question is, naturally, what is Doomsday's origin in Batman v Superman? (Minor spoilers ahead!) In the film, Doomsday is some kind of sick creation from Lex Luthor, who, as seen in the trailers, gets possession of General Zod's body, meaning he has access to Kyrptonian DNA. Convinced as Lex is to kill Superman himself, he uses Zod's DNA to conduct experiments in the hopes of creating a being powerful enough to kill Superman.

One good thing about Doomsday's appearance in BvS is that his presence forces Batman and Superman to put aside their differences and fight against a common enemy. And as can be seen in the trailers, it also looks like Doomsday is what gets Wonder Woman out in the field with the two men, which, really, makes whatever evil he's up to seem more than fair.

Whoever, or whatever, Doomsday is, he sure lives up to his name.