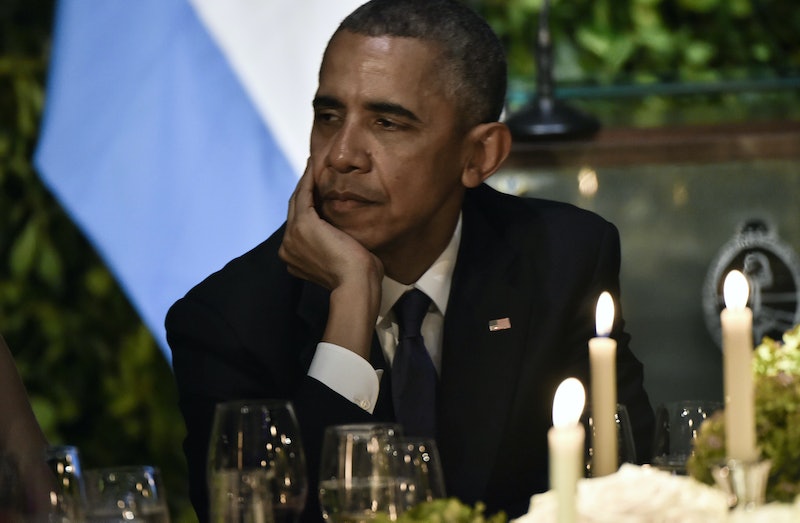 In his latest ultra-conservative security proposal, Ted Cruz said he wants police to patrol Muslim neighborhoods in the United States. Cruz's proposal came just hours after the terrorists attacks in Brussels on Tuesday, March 22. According to Cruz, this plan would help police boost their presence in areas that he claimed have "known gang activity," and it would help to stop these groups of people before they radicalize. It doesn't take much to recognize the xenophobia in these comments, so President Obama rebuked Cruz's proposal almost immediately.

It should hardly have to be said that it's completely discriminatory to advocate for a government agency to actively patrol a specific group of people living in the United States because of perceived terrorism affiliations. In fact, Obama called it "un-American" and "counterproductive," which couldn't be more true. Although ISIS claimed responsibility for the Brussels attacks, that doesn't mean that any and all Muslim neighborhoods in the United States are suddenly a threat to our national safety and thus deserve to be stalked 24/7 by the police, as Cruz would have it.

Thankfully, Obama appropriately called out Cruz for making such an asinine security proposal, especially after his recent visit to Cuba, a country in which similarly outlandish security measures exist:

I just left a country that engages in that kind of neighborhood surveillance, which, by the way, the father of Sen. Cruz escaped, for America, the land of the free. One of the great strengths of the U.S. and why we haven’t seen more attacks in the U.S. is we have an extraordinarily successful patriotic, integrated Muslim-American community. They do not feel isolated.

Defeating ISIS has remained a top priority for many politicians, especially Obama, but it is sad to see that current presidential contenders like Cruz actually believe that discrimination is the way to stopping future terrorist attacks. In his statements, Cruz likened this proposed patrolling of Muslim neighborhoods to the ways in which police sometimes patrol areas with high gang activity:

If you have a neighborhood where there's a high level of gang activity, the way to prevent it is you increase the law enforcement presence there and you target the gang members to get them off the streets. I'm talking about any area where there is a higher incidence of radical Islamic terrorism.

Furthermore, Cruz added that, "We need to empower law enforcement to patrol and secure Muslim neighborhoods before they become radicalized." The only thing radical in this situation is Cruz' plan; patrolling specific areas without legitimate cause would single out Muslims all over the country and would make them feel unwelcome. As of 2015, there were approximately 3.3 million Muslim Americans living in the United States, according to a Pew Research report.

Ostracizing and intentionally targeting Muslim Americans would be detrimental for our country, especially in a time when cohesion and a united front will help us stand strong against the threats of ISIS. Obama referred to Cruz's plan as a "slippery slope," saying it would make "absolutely no sense" to move forward with his proposal. "It’s contrary to who we are. And it’s not going to help us defeat ISIL," Obama said in his statements.

And if you need one more reason why Cruz's security proposal is absolutely wrong, CNN reported that Donald Trump agreed with this plan and called it "a good idea." You know, because an aversion to political correctness and discriminatory "security" measures are exactly what our country needs right now.