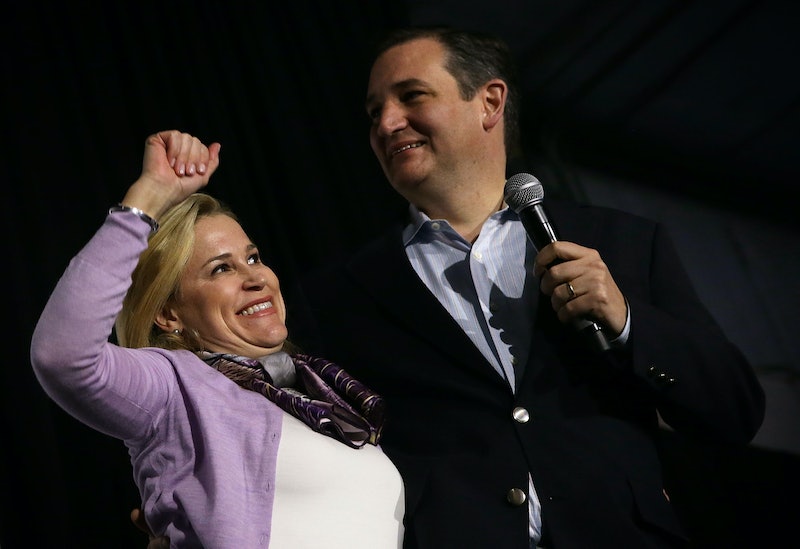 In the latest episode of the reality TV-level feud between Republican presidential candidates Ted Cruz and Donald Trump, the Donald continued his smear campaign against Cruz's wife, Heidi, with a new tweet on Wednesday. The tweet shared a photo comparing the looks of his wife, Melania, with Heidi's — the former is wearing a face for Instagram perfection and the latter, chosen with clear bias, a face for Snapchat. The photo's caption read, "No need to 'spill the beans.' The images are worth a thousand words." Translation: "Look how my wife is hotter and more awesome than yours."

Cruz fired back his own tweet and made the one valid point said during this whole dick-measuring contest so far. His tweet read, "Donald, real men don't attack women. Your wife is lovely, and Heidi is the love of my life." Don't attack women — yes, amen, preach. With surprising class, Cruz also complimented Melania Trump and defended his own wife. And for that, he deserves at least some credit — though, it's for being less obnoxious than Trump.

Of course, Cruz still found it necessary to take potshots at Trump's masculinity with his "real men" comment, but along with it, he presented the first mildly-evolved thought regarding women in their ridiculous and offensive exchange.

To recap previous episodes of the Cruz-Trump drama, Trump started it (surprise) on Tuesday by accusing Cruz of featuring a photo of Melania Trump from a GQ shoot in an attack ad. It appears that ad (which was slut-shaming in its own right) came from an anti-Trump Super PAC, not Cruz's camp. However, Trump threatened to "spill the beans" on Heidi Cruz, keeping the details of said threat properly vague just like those of his policies. Cruz tweeted back, "Donald, if you try to attack Heidi, you're more of a coward than I thought." So, reasonably, Trump responded by attacking Heidi on Wednesday.

Of course, it's quite sad that something that should be extremely basic knowledge — "don't attack women" — is apparently peak feminism for Cruz, and this Republican presidential race in general.

Should Cruz really be lauded for what should be common sense? Clearly, neither Cruz nor Trump are breaking any new ground with revolutionary feminist statements. And Cruz's recent tweet doesn't remedy his terrible track record regarding women's reproductive rights. He's known for wanting to defund Planned Parenthood and not understanding how birth control works. He's the guy who suggested women's hymens should grow back each time we have intercourse, in order for men to detect infidelity.

The bar for respecting women is low for both candidates. Thus, Cruz's tweet to Trump effectively suggesting "Hey, here's a wild idea — let's not be mean to women" is, while better than what Trump came up with, not particularly promising for this election. Neither comes out great; Cruz just appears a little less bad.

More like this
Boris Johnson’s Leadership Is In Question – Again
By Bustle UK
Every Single Big & Small Way You Can Fight For Abortion Rights
By Tess Garcia
For These Abortion Clinic Volunteers, Going TikTok Viral Is A Risk Worth Taking
By Audra Heinrichs
YouTuber Runs Into Margaret Sanger’s Grandson While Filming
By Alexis Morillo
Get Even More From Bustle — Sign Up For The Newsletter