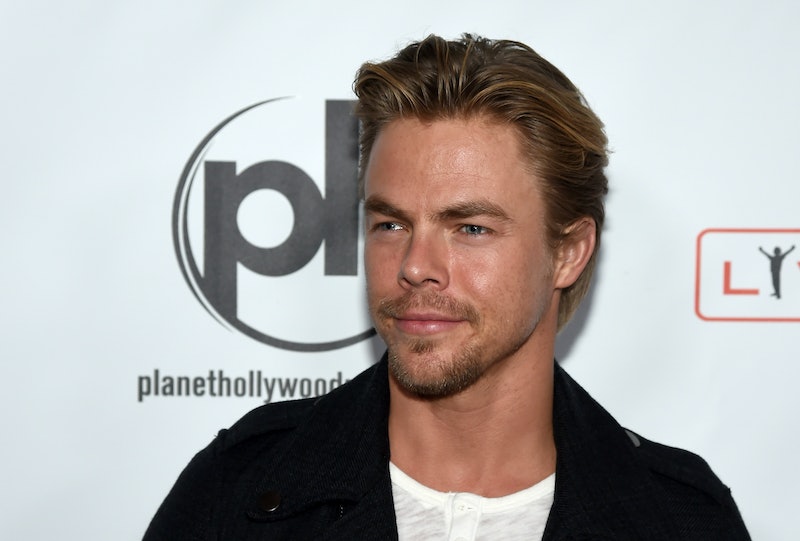 Season 22 of Dancing With The Stars is officially upon us, friends. It's that time of year when we get to see all of our favorite pseudo-celebrities put on sparkly outfits and attempts to dance with full-blown professional dance partners. It's magical and I can't get enough of it, but there's one major drawback: While many of the usual suspects will be back in action in the ballroom this season, we will also be missing a couple of key players too. Derek Hough is sitting out Dancing With The Stars Season 22, and although I will miss him terribly, what Hough is doing instead of Dancing With The Stars isn't exactly something to cry about.

Sure, Hough said that he was taking a break before, for Season 20, and ended up coming back, but this time, it looks like he is really staying true to his word. He's joining his sister, Julianne Hough, and putting his Dancing With The Stars career on a hiatus. Fans may be holding out hope that we will see him grace the dance floor this season (just once? please?), but it seems like we may have to go on without him for a little while. The show already premiered sans Hough, and the Emmy-winning dancer/choreographer also happens to have a couple of responsibilities that probably wouldn't allow him to return anytime soon.

Hopefully all these projects will help ease the pain of losing him for your TV screen this season:

Hough is taking on Broadway to star in Singin' In The Rain. He's in for the monumental task of taking on Gene Kelly's original role in the production will be opening in January 2017. I can imagine that the preparation for a role of that magnitude will be time-consuming and quite grueling.

Hough looks like he is taking his time away from the ballroom and using it to spending some quality time with his four sisters and rest of his family. His busy schedule probably doesn't normally lend itself to much family time, so it's nice that he is taking advantage of it now.

He has definitely been working on maintaining his dancer's physique in his time away from DWTS. His Instagram is full of late night workout sessions, so rest assured, he won't lose his performance edge any time soon.

Hough has apparently been learning some MMA skills in his downtime. That's not a bad skill to start developing and he definitely has the athleticism to excel at it.

Hough has been posting a lot of really gorgeous photos and displaying them from an Instagram specifically for his photography efforts. Could he BE more talented? Talk about well-rounded.

He's Guest-Starring On Jane The Virgin

The talented dancer has been posting teaser photos from his guest star spot on a yet-to-be-aired episode of Jane The Virgin. He and Gina Rodriguez (the titular Jane) have been demonstrating their superior salsa dancing skills all over their social media accounts. Not that I'm complaining.

He recently got the chance to dance alongside a true Hollywood legend, Dick Van Dyke, in honor of Van Dyke's Mary Poppins character and 60 years of Disney movies. Hough & Van Dyke performed "Step In Time" from the iconic musical during an ABC special titled, The Wonderful World of Disney: Disneyland 60.

So yeah, Hough doesn't seem to know the meaning of the phrase "time off," but hopefully he makes his way back to ABC for another Mirror Ball soon.