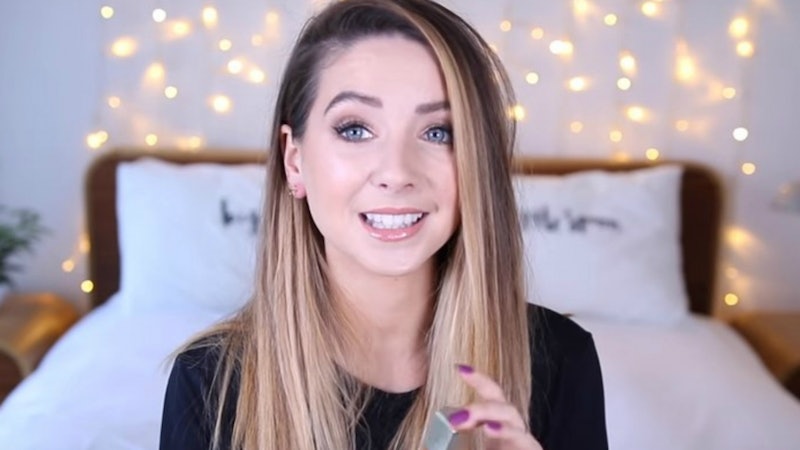 It's been just three days since the controversy of YouTuber Zoella "ditching her wholesome image" over a picture she posted, and the Internet is (understandably) up in arms. Zoella's snapchat name (OfficialZoella) has become synonymous with one more disappointing way the Internet is policing women's bodies, and only because she posted a photo of herself in which you can see the side of her underwear as she was heading to bed.

The misrepresentation of Zoella's Snapchat picture is just one of many ways women's bodies are over-sexualized without their consent. "Vlogger is beloved by young girls — but they've NEVER seen her like this," reads the subhead of an article which then goes on to claim that she is "scantily clad," and how it's the first time the "usually sweet and innocent star" has ever shown her "risqué side." Yet again creating a toxic divide between the idea of women being "innocent" versus being "sexual," not only subjecting women's bodies to labels, but presenting a woman's confidence and control in her own body as something sexual and inherently "bad" in nature.

Zoella has since spoken out about her discomfort with the controversy, and in an effort to not only support Zoella, but also raise awareness for the insane way the media peddles stories only for shock value, a lot of fans are speaking out. Zoella tweeted about it as well, noting how insane it is to be writing about her pajama choice when there are "SERIOUS things happening all over the world."

People are speaking out left and right on how the Internet over-sexualizing her, creating a scandal where there isn't one, and why this is one more way the Internet is contributing in policing women's bodies.

The hashtag #WeStandWithZoe is filled with photos of people also posing in underwear, including her boyfriend Alfie Deyes, who actually wore Zoella's panties to get his point across!

But perhaps the most effective message of all is all of the side-by-side comparisons that show how when someone like Nick Jonas poses in his underwear, and media outlets will publish articles that are headlined, "From geeky to gorgeous — the male celebs who got seriously HOT."

But truly, the crux of this issue is: so a woman posted a picture of her underwear. So what? A woman can be whatever the hell she wants to be, and Zoella's picture was really only a testament to one thing that she is — which is in control of her own body. Now imagine if we took all the energy and effort society uses toward policing, criticizing, and trying to control women and funneled into something more important — like, oh, I don't know, maybe all the horrifying current political issues or poverty or the lack of education available for women around the globe. We'd be living in a pretty different world.