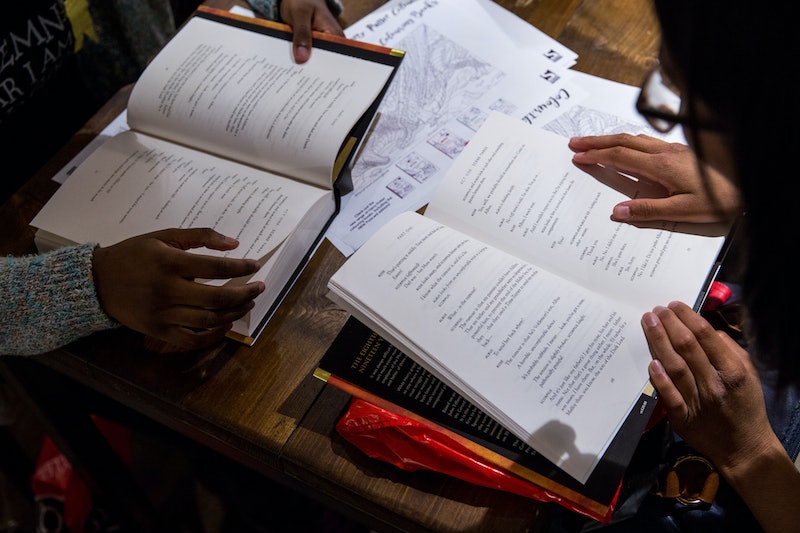 Ever since Italian publisher Edizioni E/O’s best-selling Neapolitan novels series landed on bookstore shelves, readers everywhere have been asking: who is Elena Ferrante? For years, fans of Ferrante’s writing have been exploring theories about who the pseudonymous author really is, and every time a new name surfaces — for example, professor Marco Santagata’s theory, printed in the Italian newspaper Corriere della Sera earlier this month — it gets readers talking all over again.

You can’t blame Ferrante's fans for being curious — in an age of all-but-ubiquitous social media, the writer's ability to remain a mystery for as long as she has is quite a feat of anonymity. Ferrante doesn’t schedule publicity appearances or book tours and, until recently, had never given an in-person interview. (The first in-person Elena Ferrante interview appeared in last spring’s The Paris Review, but did tantalizingly little to reveal the identity of the author.)

The Neapolitan novels, which have garnered even more attention than the mysterious identity of their author, follow two friends — Elena “Lenù” Greco and Raffaella “Lila” Cerullo — from grade school through their adult lives, and explore the girls’ evolving friendship against the backdrop of domestic violence, economic and social class disparities, the feminist movement of the 1970s, and political protest. Originally written in Italian, Ferrante’s work has been translated into English by New Yorker editor Ann Goldstein (who herself has been the subject of some Ferrante-identity theories.)

So, OK, inquiring readers are clearly dying to know: who is Elena Ferrante? Here are nine theories on the identity of the Italian author.

Recently, Italian philologist Marco Santagata posed his own theory about the identity of Elena Ferrante. In an article for Italian newspaper Corriere della Sera, Santagata detailed his process of creating a likely profile for the writer, based on close readings of each of her texts. He then ran that profile against the yearbooks of Scuola Normale Superiore di Pisa (Pisa) — the school where Ferrante’s main character Elena Greco herself studied — and determined Marcella Marmo fit the bill. For her part, the harassed-feeling Marmo has denied all claims that she’s Elena Ferrante, and even suggested Corriere della Sera buy her Ferrante’s books in exchange for the relentless phone calls and interview requests she’s received since the story ran.

2. How about Maria Mercogliano?

While denying any connection to Ferrante herself, Marcella Marmo proffered two more leads. The first is another Naples-based student at Pisa, whose name Marmo couldn’t (or wouldn’t) recall. But Santagata had already identified (and ruled out) student Maria Mercogliano as a possibility, based on the dates she attended Pisa, and some critical events (the 1966 flooding of the Arno River, the 1967 student protests and university occupation against the Italian government) that were left out of the writing. So, not exactly a foolproof methodology, but perhaps convincing enough that journalists have largely left Ms. Mercogliano in peace. For now.

Another suggestion posed by Marmo, this theory hasn’t, thus far, led anywhere. The Naples-based writer, Silvio Perrella, who also appeared as himself in the Italian documentary Una Bella Giornata, Luoghi e Miti di Ferito a Morte, about a day in the life of fictional character Massimo De Luca, hasn’t even responded to Marmo’s suggestion that he's the acclaimed authoress.

According to an article published last year in The Atlantic, the New Yorker editor and translator of Ferrante’s books, Ann Goldstein, has a friend who suspects Goldstein herself might be the Italian author. But Goldstein (and Ferrante's publisher) not only denies this theory, she claims that she doesn't even know the true identity of the writer whose works she’s meticulously translated — and furthermore, feels no need to meet her, telling The Atlantic that Ferrante’s power lies in protagonist Elena Greco, who challenges readers to examine their own lives, rather than the life of the writer who imagined her.

5. Could Elena Ferrante be the author Domenico Starnone?

Theories that the Strega Prize-winning author, journalist, and screenwriter is actually Elena Ferrante have been tossed around Italian publishing circles for years — with little substantiated evidence beyond the fact that Starnone a) is an accomplished writer and b) was born in Naples (aka: no evidence whatsoever.) Starnone denies all claims, and was even recently challenged by a journalist for writing a novel with similar themes to Ferrante’s best-selling 2002 novel The Days of Abandonment , which follows the self-destructive antics of a woman abandoned by her husband.

6. How about Starnone’s wife, Anita Raja?

A consultant for Ferrante's Italian publisher, and Starnone’s wife, Anita Raja has encountered her own share of speculation regarding the identity of Elena Ferrante — all claims Raja, her husband, and Ferrante’s publisher deny.

In an essay last year for n+1 Magazine, writer Dayna Tortorici described a private joke she shares with herself every time someone theorizes about the identity of Elena Ferrante — she pretends she knows. Her audience’s response upon revealing the much sought-after name? “Different names, every time, but the reaction is the same: a momentary light in the listener’s eyes that fades to bored disappointment. An Italian woman from Naples, whose name you wouldn’t know. Who did you expect?” Tortorici writes. So far this is the theory I’d put my money on.

Just kidding. But for any writer tempted to snag a bit of the Elena Ferrante spotlight for themselves, Ferrante’s editor Sandra Ferri has some words of caution. Recently quoted in an episode of NPR’s All Things Considered, Ferri said: "It's [Ferrante's anonymity] not about marketing. Every now and again someone will say, 'Ah, what a sly move to publish the books with a pen name, Ferrante is clever.' I tell them, 'OK. Anyone can publish with a pen name and never reveal himself. Why don't you do it? Let's see how many people have the same results.'" So, alright, I guess I’m not Elena Ferrante.

9. Are you Elena Ferrante?

There's even a hashtag: #IAmElenaFerrante. Because who can resist a good hashtag?

For all the hype, it does seem that Ferrante’s identity will remain hidden, at least for the foreseeable future. In a 1991 letter to her editor at Edizioni E/O, Sandra Ozzola, preceding the 1992 publication of her first novel Troubling Love, Ferrante explained her refusal to participate in any publicity: “I’ve already done enough for this long story: I’ve written it,” she said. Fair enough, sister. But there’s no denying the mystery will remain irresistible to readers for years to come.